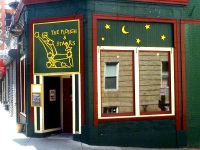 This is a small bar on Mass Ave jar Cambridge City Hall. They have 15 beers on tap. None of them are macros (yeah!), but none are unusual either. They tend to lean toward the hoppy side. The bottles and cans (5) are all macro.

The decor is city-rustic. Tall ceiling, oval glassed front door and scratched wood throughout. The bar is on a corner so there is extra light coming in. Otherwise this place would be very dark. Very casual.

Plough & Stars might not have a lot of tables but the staff always seems to find you a seat without having to wait too long. They also mange to tuck live music in to the corner, all the while, serving up good food and cocktails. I love their mushroom soup!

The beer selection has greatly improved since this fall. In addition to the standard (and handful of more unusual) English/Irish/German taps, they've added a tap for Whales Tale, CBC and a few other local beers. It really improves the selection, and I'm especially glad to see the addition of local brews. I still think the prices could come down 50c to $1 on most drafts, but the place is great and the beer list improving.

This is a charming place. That's the key to it for me, and that it's across the street now. The lighting is low, the atmosphere cozy in the long, narrow space with large windows, and the music generally agreeable, though not generally enough to justify the frequent covers.

The beer selection here is amazingly okay. There are some nice beers, but nothing that will surprise or excite most, and the list isn't very long. Still, it's a list of mostly solid beers and as long as you're okay with something run-of-the-mill you won't be disappointed.

The service is generally good and reasonably prompt, and the food looks, smells and sounds very good. It, like the beer, is just a little on the pricey side, though.

This is the type of place that I will always see as a stellar one or two beer weeknight place, but not one to spend a night at or go out of my way to enjoy. All in all, it's a fine, little bar with a great vibe. I'd love it if they would stock just a handful of more interesting beers, or at least lower their prices on their other beers a tad.

Big local scene going on in this proletariat bar, one of the last few non-gussied up guzzling joints in the Cambridge area, it seems. Never light inside, the red running lights along the centrally located bar make for an eerie glow on the ink-covered skin of the all-too-cool bartender. Fair amount of taps, with at least three Magic Hats on the last time I was there. Seemed like a great number of folks were hauling back on Red Stripe stubbies though, rather than the craft pap. Darts behind a defensive plexiglass wall, and a huge bomb dangling from the rafters. Good place to go and swill where, unless you are a regular, nobody will know your name, and more importantly, nobody will care.

I checked out the Plough & Stars on a Friday night. They offer live music throughout the month and have a calendar of all upcoming performers. This is one Cambridge location that is a music landmark. It has been around 1969 and shows no signs of slowing down. There was a cover charge on the night that I went for $3, which is very reasonable. Great location on Mass Ave directly between Central Sq. and Harvard Sq.

I really like the atmosphere here. Very laid back and comfortable with Christmas lights decorating all over the ceilings and walls. It's a small and intimite environment. Lengthy bar and wooden tables. Various framed pictures cover the walls.

They serve food here and I eat here once a while ago. It was good, but on this night I didn't try anything.

Beer selection was average for this area with your Bass, Guinness, etc on tap. A highlight and surprise was the Brooklyn Lager that was on tap. I had a few pints of the Brooklyn Lager and they were all fresh and tasty. Pints are served in British imperial tulip pints, which a great thing.

Overall, this is a cozy and comfortable bar worth checking out if you are in the area.

Pretty good little bar between Harvard and Central on Mass ave. Everyone seems to know one another in here but they are cool to newcomers too. Nothing special about the beer selection, I had Guinness, which was decent.

It got busy when I was in here and the bartenders were able to handle the rush with no trouble at all. Never had to wait more than a minute for svc.

They seem to have a lot of live music which can be a plus or a minus depending on what you're in the mood for. When there is a band, if you have to use the bathroom you could end up making one of the bandmembers move out of the way in order for you to get in and out of the bathroom. Thats how small it is. Overall, a pretty good place though.

My better half and I "stumbled" across this place about a week ago aftter parking at Harvard Square. Very small in size but very inviting as well. The place is small, the bar is small, and the menu is small. Didn't seem to dampen the spirits of anything or anyone.

The beer list was exactly what I expected. Harp, Sierra, Bud, Boddingtons, Tetleys, Guin's and etc. But don't focus on the beer. The atmosphere is what stands out here. Relaxing, inviting and everyone feels welcome. The perfect place for a Sunday brunch.

The Plough and Stars is practically a Cambridge institution. This pub has been there since 1969, and I can personally verify that the same bartender has been working there since at least 1983. This pub might only have 10 taps, but you are not going to find a better pint of Guinness in the area. This is a rather small place, but this just makes it all the more cozy. During busier times be prepared to be jammed in like a sardine. This place has a lot of regulars, and if you stop in, you will see why. They even manage to fit live musical acts in the back (and don't be shy if the musicians are blocking the door to the Men's Room). They also offer a good Sunday brunch.

an very nice little English-style pub in cambridge. went there sunday and they had about 8 or 10 decent draught beers: guinness, bass, harp, tetley's, sierra nevada, carlsberg, redhook hefe, etc.
nice wooden benches and small tables. soccer/football on the TV. good prices, too. didn't try food, but the menu looked like it served mostly authentic irish food.
i highly recommend this spot. a great little relaxing place to chill out and drink a nice beer.

update: 11/14/2004
stopped in for a pint of Brooklyn Lager. Some things change, but this place stays the same. Good band was playing too.

This is the original beer bar in Cambridge. Any one who has or does live in Cambridge should go here once. It is Irish bar, so with it comes Harp, Guiness, etc. The food is good. The atmosphere is purely European. I have gone drinking with English and Irish friends and we always end up here. I was surprised not to see it on the Barfly. I now ask others to experience it.