The Lightest One
Enegren Brewing Company 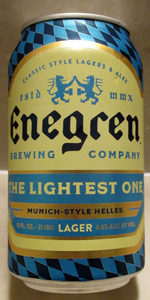 Notes: The Lightest One is a 4.8% ABV German-Style Helles Lager. Helles, German for bright, is a crisp, clean, German lager with a touch of hops.

Not only do we love flavorful, easy drinking lagers like this - but now when anyone comes to the brewery and asks us for "our lightest beer" we have a quick answer. So, whether you're new to craft beer and are used to beers on the lighter side, or you are just looking for a full-flavored light and refreshing beer, this beer is for you!

Pours a gorgeous, clear, bright, golden beer with a thick, pure white foamy head. Awesome stick and retention. Appearance-wise, it doesn't get any better. Soft bready malts and lemon zest in the nose. Crisp and dry on the palate, a bit creamy, very light, but not "watery." Zesty with some lemon-line that's a bit bitter, semi-astringent, and adds to the beers perceived dryness. Slightly oiliness. Hints of herbal/tea-like flavors. A bit minerally. Notes of honey, crackery malts, and a thin breadcrust toastiness. Bone-dry and moreish finish.

The Lightest One is a must try lager and one of the best Munich-style Helles brewed in the United States. Crisp, clean, light, flavorful, and insanely crushable.

Poured from 12oz can into my Central Coast Brewers Guild glass.

Appearance: medium golden hue with just a little hint of haze and a thin layer of white foam atop. Quite nice.

Smell: light, malty aroma, with a hint of nope hops that is balanced and quite enticing.

Taste: crisp malt flavor with a mild but nice bitter bite. This is a very nice, clean beer; tasty!

Mouthfeel: light body with a nice crisp carbonation and actually a rather nice creaminess. I dig it.

Overall: as befitting the style, this an incredibly drinkable beer. Crushable, even. It's solid example of the style and definitely a beer I could drink a whole lot of.

Pours a crystal clear, golden/amber. Thin white head that holds it's limited size well and clings to the edges as it recedes.
Smell is lightly bready with a light herbal spiciness. hints of apple/pear in the sweet back end.
Taste is a light earthy/herbal spice over top of a smooth, rustic bread crust malt body. Super mellow finish.
Mouthfeel is crisp and smooth. Super easy to drink.
Overall this seems like a nice example of the style and it's clear why this can be a beer many would overlook while also being one of the most popular styles on earth. Super easy drinking without bringing any super bombastic flavors in the mix. Very nice

Snagged a fresh six pack of this from Bristol Farms, poured into a pint glass.

Look: Perfectly clear light gold body with a flurry of carbonation rising to a pure white head of fine foam. Leaves heavy lacing thanks to excellent retention for such a light-bodied brew.

Taste/Feel: Follows the nose with a crisp, clean flavor of pure pale malts alongside the floral and lemony hops. On the palate, a refreshing minerality is noticeable and reinforces the bright malty qualities. The body is dry and thirst-quenching.

12oz can - poured into a Willi Becher at fridge temp.

Nose: This is definitely a pale lager, and it's advertised specifically as "light", but even as a pale lager, there's just nothing on the nose here. A whiff of crackery grain, a silhouette of bread, and a whisper of hay, grass, and lemon. I rarely encounter watery, weak craft lagers, but this aroma isn't enticing.

Palate: What a turnaround! The beer greets the palate with a quick crackery malt flash, followed by that dusty grain silo note, and then the most ridiculous level of minerality. The beer is so mineralic, it rivals Hill Farmstead saisons. It isn't tart, but the minerality is so crazy, it really borders on this tart, zesty, mineral-water-with-a-twist-of-lemon element. A whisper of lime, followed by some herbal coriander seed, approaching the finish, this nutty, breast malt note appears, before some very restrained hops lend some leafy hop spice, grass, lemon zest, and concluding with just a wisp of resinous bite. Fully dry.

Mouthfeel/Body: Light, crisp, and snappy, with a brisk fluidity that makes for a quenching sip without translating as watery - in part to the underlying malty texture. The minerality is off-the-charts - tingling the palate like a vitamin C tablet. Lively, racey effervescence borders on champagne-like, but not as aggressive. Dry from start-to-finish.

Overall: It's a shame the aroma is so weak here, because this is a spectacular lager. There are few simple pale lagers that really stand out as spectacular, and I feel that this is one. It's a simple beer, but that is the point, and it's just so masterfully crafted. Definitely worth trying.

I don’t know. Name a field goal kicker... Oh, I got this. Chip Lohmiller. This one is like ol’ Chip crushing a 45 yarder right down the middle with ease. He then looks at the stands at all the hotties and is like, “Yep.”

Wow! This thing is clean and smooth like that. There is almost nothing wrong with it. But like I said, it’s still a 45 yarder. Maybe with a lil more bite and crispness, we would be talking a 70 yarder in Mile High.

Handsome crystal clear pale golden brew with an enthusiastic pile of white foam in the Aventinus Weizen glass. The body is light but moutfilling with the sudsy carbonation, the way I'd hope a draft of German swill would be. But it tastes like a . Sort of watery in a nice way, just enough grainy taste, and a faintly bitter resiny finish.

Aroma is not the hint of skunk you might expect, but a touch of elegant American hops. Overall this is one of the best cheap light beers I've had in ages. Clean, crisp, and refreshing. The pedigree of this Trader Joes surprise is rather vague, but it's a step up from the Simpler Times Pils, which come to think of it seems to have disappeared. From the 12 oz can purchased in southern Calif.

Sweet and light honey malty and subdued lemony zesty nose on this one! Taste follows with a tasty and balanced, honey malty and lemon citrus hoppy finish. So crushable and refreshing to drink! It is light, but still flavorful and crisp! This is great!

Finally picked up one of Enegren beers, along with their altbier Valkyrie. Had heard great things about their lagers. Back of the can read, “The Lightest One is a traditional Munich-style Helles. This brilliantly clear lager is delicately light yet full-bodied with just a touch of German hop flavor and aroma. In Germany, they call this “bier.”

Poured a light amber clear color with 4-to-5 fingers of off-white rocky head. Lots of bubbles coming up from the bottom of the glass at different speeds, looking like a snow globe. Excellent spotty lacing. World-class retention. (Sight - 4.50)

Smelled hay, corn, Shredded Wheat cereal, white bread, Noble hops, honey, a touch of floral, grass and hints of herbal notes. Much of the same from the can. (Smell - 4.25)

Really enjoyed this overall. Can’t wait to grab some more of it. (Overall - 4.50)

Mousel from Canada (ON)

Great mouth feel, with perfect balance of sweet malts and spicy hops -- nice and Bready! If you'r tired of the Socal Thin, Sharp, Mexican Pilsner this is perfect. It's great to finally find a local Helles Lager that I can get in a 5G Keg.

taste aint light on this one! really nice flavor and (as far as i know) true to the style and flavor!! i really like it!