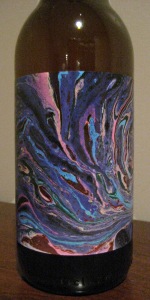 Poured a somewhat clear (not translucent) golden body with two finger well-carb'd head that died slow and left lace down glass.
A sour, dirty hop aroma that gives off not just citric but almost a sour fruit/veggie aroma and even that grassy aroma one can get from cheap macros.
Light to medium bodied, this beer is all about the hops as a bread/cracker malt base that comes across as grainy, and sweet caramel and sweet fruit notes are buried under dry, bitter, dirty/spicy, earthy hops that even come across sour/tart/funky.
Not a bad beer but not my favorite for an IPA because the hop bitterness is strong enough to nuke my taste buds and basically dry them out before I can even finish my beer, which naturally leads to a very dry, almost tart, finish as I find myself not wanting to finish the beer due to my tongue feeling like I just ate burnt toast and I need water.

Incredibly bitter, tropical, citrusy and gra,-a,-a,-assy, Nathalius strives to capture the bitter-dominant taste of American IPA but with higher alcohol and extra hops to counteract the malts that push its strength. Its a challenging IPA with multiple levels of complexity even though its push creates polarizing taste.

Its murky golden-straw appearance its tinged with light peach and honey for a quite appealing color. Upon that builds a creamy, sticky and everlasting foam stance that laces the glass with what seems to be spiderwebs.

Pungent with its musty fruit, mulled grass and pithy citrus scent- the beer is fully hopped; chocked full of lupulin, flower, leaf and stem of the hop bine. It fully utilizes the plant in all its glory and rusticity. Over-ripened citrus notes reel in the tropical fruit punch aromas for something like a grassy cream sickle.

Unlike the aroma, the taste has a glimmer of malt- Its dry bread character is both yeasty, doughy, starcy... but dry! Its sheer hop dominance creates that dryness, carrying with it the bitter grapefruit, pithy orange, dried lime, and resinous pine flavor as early as the middle palate. In the middle of it all, a tart tropical flavor interjects the blend with sour-sweet pineapple, mango, apricot and passion fruit that tempers its harsh grassy and minerally/metalic taste. But as the beer finishes, everything vanishes quickly! ...except for the bitterness. That lasts for everrr!

Medium bodied (I'm surprised its not weighed a bit more), the beer balances much like standard American IPA, but its enormous dryness from both alcohol and hops sneaks up on the taste and dries the palate well before the flavor is fully realized. An unsettled bite gives the ale a lot of mineral scrubbing and vegetative astringency that's easily masked by hop bitterness. Its warm finish is understated as the beer drifts into a beautifully drinking experience.

Omnipollo's Nathalius is a highly vegetative IPA, just as much as it is tropical and citrusy- but those rudimentary tastes don't detract from the drinking experience as much as you'd think. Its added stemmy sharpness really offsets the malt and makes the beer much more of a taste that's expected from lower-strength IPA but in elevated form.

Strong aroma is quite hoppy and has a firm yeasty overtone, very like a yeast cake or package. Pours a hazy, bubbly solar yellow with a thick eggshell head that leaves some good lacing. Flavor is hoppy and quite bitter and yeasty, with a hint of fruit. Hmmm - rice and corn? Maybe that’s why it tastes rather differently from other Imperial IPAs I have sampled. Finish is hoppy, quite bitter - unfortunately, bitter in a nasty way - and quite yeasty. Not Omnipollo’s best, but give it a fair shake.

330ml bottle, with one of those aggravating front labels with nothing but 'artsy' imagery, and nothing about the product herein. Less than gratifyingly, the back label proffers this as an Imperial IPA, brewed at De Proef, so, well, there's that.

This beer pours a rather cloudy medium golden amber hue, with three fingers of aggressively puffy, bubbly, and eventually caked ecru head, which leaves some broken pockmarked walled lace around the glass as it evenly fades away.

It smells of pungently pithy grapefruit, orange, and pineapple citrus fruit, acrid lemon pepper, a sassy pine and musty hemp earthiness, and a crackery caramel and biscuity caramel malt. The taste is equally heady in its citrus and pine astringency, bitter and flavourful in equal measure, with a seemingly retreating bready caramel malt, among further dry lemon rind, some peppery spice, and further herbal, leafy hops.

The carbonation is a bit zingy, but settles out after a wee spell, the body a tenuous medium weight, and tacitly smooth, the hops doing well to hold off messing around too much here. It finishes pretty dry, the lingering, and still duly bitter pine needle, citrus rind, and herbal hops not taking any prisoners.

An egregiously bitter (in a good way) DIPA, the hops really just pushing the malt and even the alcohol right off the page, running the table, what have you. Single-minded, one-sided, whatever, it goes down quite swimmingly, especially if you're an unabashed hophead. Nice to see this filter through so many European layers to get to me.

Thanks to ROBD for hooking me up with a bottle of this. IIPA brewed with rice and corn.

A- Releases from the 12oz into a tulip glass with a fairly hazy deep golden body. A large cap over two fingers with good retention and a thick frothy-foamy texture. Pillows of lace at the top and thick webs beneath.

S- Intensely herbal hop aroma with a large dose of citrus zest coming with that. Has a certain musty dankness as well as notes of pale fruits and grains. Grassy and spicy.

T- Hops are pungent and pretty much decimate the palate at this juncture. They carry a bitter herbal and perfumy feel that is hard to get past at times. Oranges, bitter lemon zest, floral, peppercorn, earthy, dry grassy and fruity hops. Light crackery grains and bread like beneath the bitter hop explosion.

MF- One of the foamiest and highly carbonated Double IPAs I have ever had. Thick and creamy body. Gives it an effervescence and really triggers a bitter decimation of the taste buds.

For me it is hard to get past the high carbonation piggybacking on the intensely herbal and perfumy grassy hops. It all comes off as extremely bitter in the end and I find some of the more subtle, inviting flavors are lost.

A: Pours a very cloudy dark yellow to orange color forming a big creamy and soapy white head. Good retention and lots of soapy lacings formed and left in the glass

S: Very hoppy in the nose. American hops. Fruity, citric and pinny. Strong notes of pale malts too: Reminds me Maris Otter but I suppose that this is a combo of pale and lighter crystal malts. Notes of tropical fruits, mainly mangoes. Very flowery... Yeasts have a quite earthy profile

T: Follows the nose. Strong notes of hops and pale malts. Again, reminds a combo of pale malts and Maris Otter malts. Interestingly, it seems to be brewed with corn and rice. I suppose that corn and rice might be a good combination, sometimes. Upfront is dry, citrus and pinny followed by an intense and stingy bitterness. American profile hops. I would dare Chinook and maybe Simcoe... Really bitter and earthy in the end. Quite pleasant to an IPA lover like me

A hazy golden orange with lots of tiny particles, enough clarity to see a couple bubbles but I know there's plenty in there because a massive head has great retention and leaves several partial rings deep down the glass

S very tropical nose, mango, pineapple, passion-fruit, grapefruit, and lemon, has some pine and toffee and something strange in the background I can't quite place, burnt rind maybe?

T dry cereal and the rinds stronger then the nose, much stronger, everything I smells still there in one form or another but there's less tropical notes, has some spicy herbal notes as it warms. I like it but there's something there I just can't place, nothing bad just strange and its bugging me that its so unfamiliar to me

M medium bodied, quite gritty, somethings burnt on the finish and I just don't understand what it is, I do recognize the piles of rind that lingers with it

O good beer but a few tweaks could make it great, there' something about this one that confuses me but its not offensive so I'll let it slide

I'm not getting any of the Proef yeast that I was expecting but I am getting something strange that I can't pinpoint in its place, I might just buy a second bottle just to figure this one out

Poured into a Black Raven pint glass. Pours a cloudy caramel orange with a finger of off-white head with great retention and lots of lacing. Quite effervescent in the pour, but still retains its head. Aroma dominated by pineapple with orange family citrus, caramel malt, pine and grassy hops; interesting. Flavor is quite unusual, with intense citrus hops, light pale malt, citrus and light tropical fruit as well as a flavor I can only describe as a lemon produced by a spruce tree; very tart and resiny. Finishes with intense citrus hops bitterness and residual odd fruit flavor. Medium bodied. I have to say that this skates on the edge of being just too resiny, bitter and odd to work, but I really enjoyed it. It is rather unbalanced and could have used a more robust malt body to support the intense hops, but I kept going back to the glass to try it again both to figure out the flavors and to get that intense hop bitterness. So interesting that although it was almost too intense, I'm going to get another bottle to experience this again.

My first beer from Omnipollo, whom I have unofficially labeled as "the Swedish Mikkeller".

A - 330ml pours out a nice bright orange with some pleasant haze to it. White head starts at a couple fingers, ends as a mostly full cap, bits of lace are left behind.

S - Some pretty pungent earthy, grassy, vegetal hops. Like, roots in soil type of earthiness. Suggestions of lemon and pineapple lie beneath, along with kind of musty/oldish sweet malts.

T - A brash assault of hops, yet more complexity and harmony than the nose. More tangy and peppery citrus fruits (lemon, grapefruit, tropical) coming through here. Vegetal notes have mostly ceased but it still delivers a heaping dose of leafy floral and earthy resin. Malt is a little more buried here but there is some light crackery and caramel presence.

M - Nice smooth and biggish feel, good swishy carbonation, a bit abrasive with the bitterness which lingers and gets tiring but not at an overkill level. Pretty good plethora of hop flavors with some slight malt backbone.