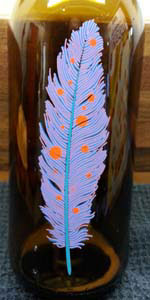 Can: Poured a hazy bright yellow color ale with a small foamy head with light retention and light lacing. Aroma of fresh mango puree with some light tart notes is very enticing. Taste is also dominated by fresh mango puree with some tart notes and light residual sugar notes. Body is full with no filtration and good carbonation. Very refreshing beer that is closer to a smoothie sour than a gose.

Reviewed from notes. Poured from a 22 oz. bottle into a Cigar City Brewing snifter glass.

A: Hazy light gold, almost straw colored - like lemonade. A finger’s worth of white head fades away quickly despite a good amount of visible carbonation.

S: Light lactic and lemon citric acid. A mild gristy cracker malt body. Honestly, just not much in the way of aroma here.

T: Light citric tartness, lemon rind, and tropical fruits (especially mango). Two-row and cracker malt body. No discernible pilsner malt presence, though maybe a mild wheat husk. I don’t get any lactose flavor (as the label indicated to expect). Some tart acidity and dryness in the hang, though not overly so in any category. Just a hint of saltiness at the swallow.

M: The body is borderline watery, or at least quite light. A good amount of carbonation sensation and low alcohol presence.

O: Nothing really wrong with it...just unexciting and forgettable. The fruit isn't as prominent as expected, and the tart level is fairly low with minimal depth and no funk to speak of. And not much salinity beyond the hint at the swallow. Meh.

A 500ml can with a best before date of 5th November 2019. Poured into a Holy Mountain tulip glass.

Aroma: Lemon peel, citrus zest with a touch of mango.

Taste: Lightly tart and sour, light unripe mango, lemon, citrus zest, rind and peel, and only a touch of salt.

Mouthfeel: Light to medium bodied with moderate to soft carbonation.

Overall: Not bad, but I was hoping for more mango, salt and carbonation as a Gose.

Aroma is strong mangoes and citrus. The flavor is mangoes, bright citrus/lemon, fruit, wheat, a hint of salt and a tart/sourish/medium sweetness finish.

Another day another Omnipollo, this time it’s their Bianca Mango Lassi Gose, which sounds brill (I love mango, it’s like my 2nd favourite fruit after watermelon). The combination sounds great too - tropical sweet mango mixing with the salty and tart flavours of the Gose style - what can go wrong? Not much when Omnipollo brew anything really. Last time out with Omnipollo was their Original Rocky Road Ice Cream, which is a dessert Stout, and before that was the first light beer I’ve tried from them which was the Original Ice Cream Pale - that was one of the better beers of 2017, so here’s hoping Bianca Mango Lassi Gose can deliver the goods like that Pale did.

A: Nice murky mango-coloured body with a thin white cappuccino foam head that hangs around as a patchy lace blanket. Love my beers cloudy so this of course gets the “Doc Hops Brand Seal of Approval” - you can only find it on products which meet the high personal standards of me, Doctor Hops. 8/10.

S: Wow, if you put a blindfold on me and asked me what was in this glass I would say mango lassi - it smells exactly like a traditional Indian mango lassi! For those unfamiliar with the aroma of mango lassi it is: sweet mango pulp, yoghurt, and a hint of salt. You pretty much nailed it again Omnipollo. 10/10.

T: Ok, was not expecting that - this beer is insanely tart, like a Warhead lolly (extremely sour candy from Australia), to the detriment of all the other flavours. My best guess is poor shipping practice and overfermentation in the bottle has caused this (though I did also activate the yeast when I was pouring it). Either way the true flavours are lost in a maelstrom of sour candy character. Background hints of mango, lime and salt in there as well. Damn what a disappointment. 6/10.

M: Mid to light bodied with a decent amount of carbonation, a bit burpy this brew. 7/10.

D: Bit of a shame this brew was a massive sour bomb - I really wanted to enjoy some mango lassi flavours, which I’m a fan of, yet the sourness of this beer ruined those flavours. That said the aroma of this brew was right on the money - rarely do beers that are named after other drinks/food hit the mark as accurately as Bianca Mango Lassi Gose, however the real enjoyment of a beer for me is in the flavour - but if I could sit and sniff a beer all day this would be the beer. 7/10.

Food match: Antacid might be a valuable thing to have on hand here...

O: This is the best sours I have ever tasted. And I hate sours. I even liked it!

On tap at Overshores Brewery.

Looks like orange juice, bright orange yellow, opaque, with a thin ring of bubbles around the edge.
Smells fruity, a little sweet mango and salt.
Taste is very good. Mango fruit and other fruity tones like peach, but the salt and tart give it a nice edge and give it another layer of depth.
Feels well balanced. I was worried it would be super sweet and slick but it's not - the salt and tartness keep everything sharp and refreshing.

Picked up a bottle of this at Julio's a while back.

A - Poured into my Duvel tulip a crystal clear honey copper hue with a thin one finger head that faded quickly to leave thin wisps and a light halo.

T - Taste is much better than the nose. Fair amount of salt and lime, little bit of vanilla and lactose, some light caramel malts as well that grow stronger with time. The mango is on the lighter side. Nice tartness but really generic.

M - Mouthfeel is brightly carbonated, crisp, but comes across as thin/watery.

O - Overall this was a huge disappointment. Not sure if it was an old bottle or what but the mango was practically nonexistent. Incredibly unfortunate.

Burnt gold color with a thin ring of 1/2 finger in the snifter.

Lots of lime and salt on the tongue, with some mango, peach, apricot, and bright citrus. Just delicious. I can taste the milk sugar too. Sour lime salt on the finish. It's pretty lovely.

Overall, a winner. I love this Gose, always have. Try it if you haven't yet.

Look: Pours a dark shade of golden yellow with a one finger, off white head that retains well and laces the glass moderately.

Aroma: Sour, over ripened mango , some notes of toasted grains and salt with a mildly sweet, floral, grassy undertone.

Overall: Quite nice, Bianca isn't overtly vinegary or sour, while still retaining a nice tart quality emblematic of the Gose style. Salt level is moderate and does not detract from the flavor. Not watery or too thick on the palate, excellent mouthfeel. The initial taste incorporates a solid backdrop of creamy, toasted grains to complement the tartness. Very enjoyable, especially on a hot day.

Poured to a teku glass.

A: The body is yellow hazy and shiny. The head is minimal and white. Showing awesole retention. No lacing. In the end of the pour, a giant solid got inside the glass. A friend of mine also had the same problem.
S: The aroma is very IPA-like, having a citrus aroma, a piney and resinous and then a really big Mango profile, resulting in a very interesting aroma.
T: The beginning of the taste has a tart-like sweetness resembling a natural yogurt. There's lots of Mango, with a milky touch. By the end, there's a very mellow sourness and a mild bitterness of corra hops.
M: The body is low. Carbonation is high. Alcohol is low, at 3.5% ABV. Bitterness is low but sourness is medium/mellow.
O: Another great sour by Omnipollo. Great stuff here!

Bianca Mango Lassi Gose from Omnipollo
Beer rating: 90 out of 100 with 229 ratings