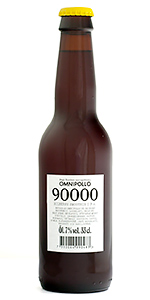 A 330ml bottle with a best before date of 5th August 2016 and poured into a Spiegelau IPA glass.

Appearance: It poured a murky red purple colour with a one finger lightly pink head that dissipates quickly but leaves some nice lacing.

Taste: It starts off pretty good with some blueberry, Ribena and cranberry before some light grapefruit bitterness and then just falling off to nothing pretty fast.

Overall: I wasn’t a fan of its appearance and while the aromas were good, the quick fall off in the taste was a bit disappointing. Perhaps my hopes were too high to start since I really enjoyed Magic #4:21 but since then some of these ‘experimental’ Magic brews haven’t quite matched #4:21’s must buy status in my opinion.

Smells of crisp lemon peel among a sweet fruitiness, blending into prominent, cakey malts. Red fruits and kumquat swirl around a very profound maltiness, soothed by a note of grass and refreshing water melon.

Has a higher carbonation, with a refreshing mouthfeel to it, to which gets added a pleasant bitterness during the beers finish. The bitterness coorporates with equally pronounced malts outstandingly well, creating an exciting tenseness till the beer leaves the palate.

Begins with dry lime peel and unripe currant among earthy, fermented blueberry. Among this strange but pleasant foundation settles a toffee malt profile, supported by the ripe fruitiness of nectarine, juicy pomelo and blood orange, struggling with each other until the malts prevail in the end. Those malt qualities get well entangled into the beers slowly developing bitterness, featuring even more lime than before, bringing back its fruitiness at a very late stage after the swallow.

Very experimental ipa, with a well working interplay between fruits and malts, both relying and benefitting from each other. Its fruitiness is unique, already announced by the beers reddish color, while integrating the red fruits without forgetting about this still being a hoppy beer.

Just a crazy looking IPA. Beautiful raspberry dark blood orange/red color with minimal head. Smells pleasant, fruit forward pine and its welcomed because this looks nothin like what I'm used to. Taste is balanced, no overwhelming hops and easy to drink with a subtle amount of malty base, still dark fruits dominate the taste and almost remind me of a fruited Berliner Weiss or an American wild ale. So cool what they did here!
Feel is smooth as butter, totally crushable, stunning look, no problem here this is a well crated beer.
Overall a crazy take on the IPA - really cool and awesome flavor, never had anything like it.

330 mL bottle. Murky purple body. No head. Smells very citrusy. Grapefruit. Blueberry behind it. Lactose? Tastes of grapefruit up front. Lactose quickly behind it. Blueberry comes in third. I don't get any of the other adjuncts. It's an interesting combination, though. Medium carbonation and medium body. Just a hint of creaminess. Fascinating.

The colour is... uh... blue-beige-purple, the liquid is cloudy. The low pale pink head dissolves quickly leaving no lacing.

The taste is semi-sweet and a bit harsh. Growing notes of blueberries and peaches. Biscuit-like malts, harsh raw bitterness. Hints of orange candy and liquorice. Medium body. Growing warming alcohol in the aftertaste as well as blueberries, raspberries and blackberries. Hints of soap and banana peels. The finish is sweet with some hazelnuts and bitter herbs.

The carbonation is strong, the many very small bubbles short-lived. The liquid is harsh.

A highly experimental beer, that really makes the blueberries/bilberries show off. I don’t really know where the nuts or the vanilla are, though.

It pours purple, hazy with a one finger high, white head that dissapears fast. Almoust no lacing on the glass.

At the first sip I react: "What the h*ck is this? It taste like toothpaste!?" - Then after one ore two more it grows on me...

Wow! This is different! I can't help myself - I do like this! Strange but great and refreshing!

Dark and hazy purple color with pinkish head. Aroma has intense hoppy notes reminding me of Citra and Mosaic hops, along with the blueberry and some creamy (lactic) note plus a slight vanilla tone. All these aromas blend together very well. Taste starts really hoppy and slightly tart from the blueberry. Gets quite bitter to the finish and also lingers in the aftertaste together with some nutty note. The taste is not as well put together as the aroma. You definitely get the Blueberry and IPA part but also some nuttiness from the pecan and/or almonds. What I would like is some more sweetness to balance the bitterness and maybe make the vanilla come through in the taste. But anyway, it's still a really good and interesting beer overall.