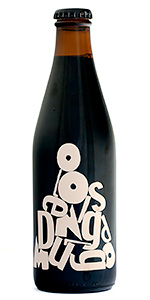 Black with very creamy hazelnut foam but which disappears in a short time. Pronounced scent of blueberry cheesecake, cocoa, caramel, vanilla and dark fruit in alcohol in the background. On the palate there is cocoa, caramel, vanilla, blueberries, all soaked in a generous ethyl note. The entrance is very sweet, then there is a bitter and dry passage and finally that sensation of liquid dessert returns with arrogance. Bitter aftertaste with blueberries that slightly balances the sweetness that distinguishes this beer. Medium body and low carbonation.

Had from a bottle bought at Wine and More in Busan.

A- Jet black with a coffee head that lasted a short time and didn’t leave heavy lacing.

T- it tastes like blueberry cheesecake and I mean that in a good way. You definitely get blueberry upfront with a creamy vanilla taste that lines up with the cheesecake description. Roasted malts in the background. Super tasty.

Pitch black color with just a ring of dark caramel head that vanishes.
Nice aroma with notes of chocolate cake, blueberry liquor, coffee and milk powder.
Rich flavor with notes of cocoa, lots of blueberry, cola, roasted malt and a bit of charred wood, cinnamon, sourdough, licorice, milk powder and vanilla. Dry aftertaste with a fruity and roasted note.
Bordering full body with low carbonation.
Interesting Imperial Stout balancing blueberry sweetness with roasted, milky and some char notes. You can say it reminds of a blueberry cake with a brownie base.

33cl bottle served in a stemmed tulip. This beer looks lovely in the glass - one shade shy of black with a tight, quarter inch, mocha-colored head that dissipates into a thick band around the edges and a soapy slick across the center. Nose reveals rich chocolate aroma, sugary blueberries and hints of vanilla - extremely decadent. Taste consistent with nose; however, the blueberries are slightly tart and even out the chocolate. There's also a hint of roast/char to the flavor profile. Mouthfeel is light-medium in body with a light carbonation. Overall, quite delicious without being cloying.

The taste has loads of blueberry coexisting with the cheesecake flavor, and the dark chocolate/char flavors from the imperial stout side of the beer. This is magnificent, IMHO.

330ml bottle poured into a snifter.

Very deep brown to black in color, the pour pops up quick foamy tan head that is there and vanishes to some bubble film and sheet atop along with several sticky and spotty legs lacing alongside.

Super! Blueberry, raspberry, strawberry, yet creamy milky cheesecake covering through a nose with its devastatingly sweet like a premium dessert. Cookie too along with vanilla, biscuit, syrup, sugar, toffee, light coffee and milky chocolate, and a little hint of alcohol.

Sweetness led at first with all those dessert flavors exactly like the aroma but this time it is counterbalanced by some boldness of Stout like coffee and milky chocolate as well as some roasted flavor. It is still with sweetness throughout the journey with cookie, vanilla, biscuit, syrup, sugar, toffee, and slight warming touch of alcohol to make it real.

The body is full and viscous with lots of chewiness while the carbonation is soothing. Overall mouthfeel is thick but not too cloying while the feeling is well-rounded with a sweetening dry finish.

This is a sweet treat for all the sweet-tooth. A dessert in glass, it is more focus in the blueberry cheesecake as a dessert quality in the aroma while being a bit more with Impy Stout character in the palate sensation.

Poured from fridge temp. Pours jet black with almost no head. Smell immediately radiates past the glass. Wow. Nose is blueberry cheesecake all the way. Also getting vanilla, chocolate ice cream. Taste is absolutely incredible. Not as cheesecake forward as the nose - more chocolate, a bit of coffee (including a bit of bitterness), vanilla, oak, cherries, blueberries, a bit of roasted malts, and maybe a bit of licorice. Absolutely incredible blend of flavors, and really smooth. Alcohol heat is absent, despite this coming in at 12%. The mouthfeel is amazing - thick and creamy. This is a really amazing stout, and Omnipollo knocks it out of the park again.

Time to @%*& some ^#$% up! Omnipollo knows no bounds. I know this now. Anagram is brewed with adjuncts (i.e. anything that isn’t hops or malt) in the form of blueberries (one would hope) and lactose (to give it body). Look after Selassie and Noa Pecan Mud Cake, my mouth wanders at the thought of a new Omnipollo, and the rest of my body has to snap it out of its trancelike state. Yes, I’ve only had their ridiculous dessert beers so far, but so far has been pretty sweet (literally!) so I’m keen to crack on and solve this anagram [I’m thinking there’s a sentence we can make out of the pink writing on the label... “long goes old mud ID”... yeah, screw you ID!].

A: Hard pouring gave this one of the darkest heads I’ve ever encountered! Chocolate brown head! Body is obsidian, as expected, and this would be a fearsome beer were it not for the delightful scent of blueberry wafting off it and allaying all fears instantly. The head dismantled rather quickly leaving nothing but that now ominous scent of blueberries. 8/10.

S: Smells from the get go like the sort of perfume a sixteen year old girl would get for their birthday: ultra-sweet (and powerful!) blueberries with a note of vanilla, strawberry as well, and a creamy milky scent. This is a beer that smells more like a dessert than any other beer my nose has encountered! It’s striking in its lack of beer aroma - I reckon I could even trick my GF into drinking this (she hates beer - oh sweet irony!). 9/10.

T: Absolutely crazy as bat-shit yet again Omnipollo! Wow, hats off - they captured a blueberry cheesecake in a beer right here: blueberries, vanilla, cream cheese... it doesn’t even taste Stout-like, my tongue is coated in this viscous creamy blueberry character and only after the sip can I detect a coffee grind (mild) bitterness. Never mind that 12% ABV being almost completely non-existent. 9/10.

M: Mouthfeel is super heavy and totally viscous, man I never thought I would say this but “it needs to be a bit lighter - it’s too much!”. 8/10.

D: What a beer! Dessert-tastic! It’s not for everyone though, people will fear its super viscosity, its attack of blueberries, its lack of beer taste, its sweet-sixteen perfume aroma, but I say if you like an Imperial Stout/dessert brew - give this a go. I thoroughly enjoyed this change of scenery, thanks Omnipollo! 9/10.

Food match: A perfect match for blueberry cheesecake... [bit of a “duh” there].

From Labirratorium. In Teku glass. Playing Actual Sunlight. Cheesecake is my favourite dessert, and this beer captures its profile really well in both aroma and taste. Alcohol warm a bit high though. No foam at all

Nose is heavy on blueberry cheesecake, as advertised. The scent is too sweet and cakey, which may be a silly complaint, but it comes across a bit artificial. The taste is the same. They nail the concept, but it is too much. Sweetness overload, lots of lactose.

Got this one from Plan B in Rotterdam

From a bottle into a snifter
Blueberry Cheesecake Stout

SMELL: Smells like blueberry cheesecake. Vanilla and cream, blueberries for sure, milk chocolate and cookie dough. Really decadent and exactly as advertised.

TASTE: Blueberries, vanilla and creamy milk chocolate up front. Pretty flavorful and interesting. This really is blueberry cheesecake, just as advertised. Some bitter coffee and chocolate at the swallow, moving into a bold and persistent finish of blueberries, vanilla and cream, milk chocolate, roasted flavors and some bitter coffee and pure chocolate. This is really flavorful and decadent in the Omnipollo adjunct style. Lovely.

PALATE: Medium body and medium levels of carbonation. Creamy enough on the palate, goes down fine and finishes slightly mouth-coating. Some bitterness and heat lingers.

OVERALL: This is great. First had this one on tap at Borefts this past September and it was absolutely delicious. I think I went back three or four times. Very happy to see this in bottles and to also find out that it’s just as good. You’ll need to be a fan of adjunct-laden stouts to enjoy this, but if that’s your bag, you’ll love this one. It’s full of flavor and is exactly as advertised. Try it if you think you can appreciate the obviousness. Highly recommended.

Such amazing aroma pucturing nose, unbelievably volatile! A lot of raisins, sweet berries.
Beautiful smooth thick oily texture.
The colour is dark brown almost opaque strong coffee-style.
If it only hadn't been for this uber-sweetness, this would have been my all-time favourite beer.

L: Pours rich with slight dark tan head and slight lacing. Dark molasses in color.
S: Huge sweetness upfront. Heavy blueberry and vanilla. Marshmallow fluff. Graham cracker.
T: Not as sweet as the smell. Tart Blueberry with slight sweetness to follow. Slight dry and bitter ending. Hints of vanilla and graham cracker overall. Lingering taste of blueberry long after it leaves your mouth.
F: Good overall mouth feel. Not too heavy, nor too light. Carbonation just right.
O: Initially sweet but overall a well rounded beer that gets better as it warms. Recommended to those who like blueberry stout or interesting combinations. Definitely can taste the blueberry cheesecake.

Appearance: It was black in colour with a nice one finger brown head that dissipated fairly quickly while leaving some spotty lacing.

Aroma: Pretty close to a blueberry cheesecake. There is a strong Graham cracker crumb mixture aroma along with toasted coconut flakes, vanilla and blueberries.

Taste: Moves away from blueberry cheesecake territory here. Sweet blueberry and blueberry jam were definitely there, followed by milk chocolate, vanilla and hints of sweet alcohol.

Overall: I think that the blueberry cheesecake experiment was definitely successful with the aroma, but not so much with the taste. However, it was still an enjoyable sweet dessert Imperial Stout.

I'm reviewing here the classic 12% version here and not the 14.5% barrel aged as some BAs have done here.

S - Well, it really smells like a blueberry cheesecake, a lot on the biscuit, a bit on the lactose and the blueberry

T - Perfect balance. It seems like I'm eating a blueberry muffins with a latte. A good complexity of coffee, blueberry and malt presence

O - Maybe the most balanced Omnipollo dessert beer out there. Good complexity, nice sweetness. 12% ABV?! It can't be. I definitely can't tell. The best use of blueberries in beer I've had