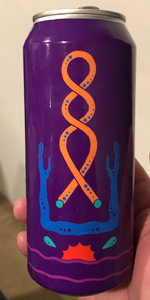 16oz can pours a slightly hazy orange with light lacing. Tropical, mango with some vanilla on the finish. Balanced, not bitter, alcohol is hidden.

A great beer from an interesting brewery.

16oz can. Poured out a clear, golden orange color with a small, off-white head of foam. It left subtle lacing on the glass. It smelled of vanilla, pine, caramel and toasted caramel. Strong vanilla taste with toasted caramel, toffee and a bitter piney bite.

Notes on can are obviously a marketing ploy. Color is typical orange color with white head. Nose is citrus. Taste is full on IPA with a great follow through of flavors that do not overwhelm the palate. Good beer.

16oz can with an indecipherable canning date, poured into a can-shaped nonic.

O: A fairly decent double IPA; didn’t expect the haze, but expected more...burgers and fries? But overall as a double IPA, it surprisingly works.

Citrus nose, along with slightly herbal and tropical notes. Lightly floral; honey. Somehow smells a touch stale. I'm not sure what "Vanilla burger bun crispy fries" is supposed to smell like, but this doesn't seem to be it.

As expected, a blend of sweet, hoppy, and malty on the palate; and again, a touch stale, although very little - to the extent that I wonder if this is just something from the "natural" flavors. I have no idea what the gimmick is supposed to convey; I quite literally don't get it. But, as an IIPA, it's pretty tasty.

Inspired by America's favorite pastime, burgers and fries, the brewers of Omnipollo have no problem with choice ingredients from this entree to inclusion to their mash tun. Vanilla burger buns, crispy fries and a lot of gumption gives this Impeiral hazy IPA its edge.

Bright and glowing orange, the off-turbid Hilma crowns with a part froth, part fizz froth. The succulence of tropical fruit, citrus and fine herbs decorate the nose with really no hint of the burger influence to drift past the nose. To taste, a pastry sweet upstart is of cereal, agave and honeysuckle in a rich and malty introduction.

As the dense cereal sweetness rolls along the middle palate, its rise of hops highlight the beer's full tropical flavors of mango, papaya, apricot and pineapple. With a followup of tangerine, red grapefruit and hints of lemon, the hops outshine anything burger related while chasing the taste into an herbal late palate chocked full of fresh grassiness, hemp and spicy green tea.

Medium full in body, a hint of salinity begins to create a rounded fruitiness and a fatter texture as the ale heads into finish. Lingering with a spicy bitterness remiss of cedar, spruce, tea and lemon pepper, a long aftertaste is also accompanied by the rinds of tropical fruit, gin and herb.

I figured this would be gimmicky but wanted to try it anyway. Can’t taste burger buns or fries. Tastes like a double ipa. Vanilla comes through. Grapefruit and mango. Fairly tropical.

No burger or fry taste in this one

Love this company. Beer genius in a glass. So thic-n-juicy.

A: cloudy; medium gold in color; less than a 1 finger white head that receded quickly to a thin collar; thin rings of lace;

T: follows the nose up front; from the middle through the finish, vanilla dominates; a bit of saltiness with very mild bitterness at the end;

O: don't quite know what to make of this beer; the vanilla comes through clearly; there is a bit of saltiness on the finish - I presume from the fries, but I didn't get any hint of the bun; an interesting experiment;

Saw the description and had to try it.

Tasted like a standard IPA to me with a hint of vanilla. Didn’t pick up any burgers and fries haha. Save for an odd bit of funk in the aroma? Maybe that’s for the best. Kudos for brewing with such a batshit crazy idea and still making it tasty.

This next review has to be one of the weirdest/original ideas for a beer: Omnipollo Hilma Vanilla Flippin’s Burgers Fries India Pale Ale. It’s got actual hamburgers and french fries as ingredients – no joke! Once again Omnipollo have stepped up and given us a crazy AF brew, regardless of whether or not the burgers/fries flavour comes through it’s already off to a cracking start… man, how nuts are Omnipollo, I love it! Makes Mikkeller seem pedestrian when it comes to beer flavour ideas, and that’s saying something. Also there’s a lot to be said about the novelty factor when it comes to beers like this – I’m pretty much sold as soon as I hear that there’s something weird being thrown into a mash tun, I’m a sucker for novelty, cheers Omnipollo!

S: Lemon and vanilla upfront, bit like Omnipollo/Buxton’s Original Ice Cream Pale with the aroma profile, with a touch of salt and a hint of bready character (must be the addition of the burgers/fries). Aroma-wise it’s just a nice sweet IPA with a little sumptin-sumptin. Another whiff reveals a tea-leaf note… actually this is more complex than I first thought. 8/10.

T: Funky right off the bat. Flavour hits with that tea-leaf and bready/salty combo, it’s a bit more burger-influenced than I was expecting, least if that’s where the tea-leaf character is coming from. Other flavours that come in are: Lemon, vanilla, hint of piney hops, and a long dry floral finish. An odd fellow of a brew to be sure, and I wouldn’t expect anything less from Omnipollo. It’s not all good news: that lemon comes through a bit artificial, and the aftertaste is… unsettling. However I’m splitting hairs – this is a decent IPA overall. 8/10.

M: Medium bodied with a nice creamy/dense carbonation that stands out from the crowd of (sometimes) weak/thin IPAs. I suspect this has oats/lactose for body. 9/10.

D: A solid IPA, and it’s saying something that this is one of my lowest rated Omnipollo beers to date [yeah it says I’m a total Omnipollo fanboy, lol!]. The burger/fries addition is subtle but ever-present, I’m looking forward to what weird/wild direction Omnipollo goes in next, always entertaining! 8/10.

330ml bottle - a 'Vanilla Flippin' Burgers Fries India Pale Ale' [sic]. Ok, then. I kind of want to shout out this one's name in the manner of Fred Flintstone.

This beer pours a slightly hazy, medium golden yellow colour, with three fingers of puffy, loosely foamy, and bubbly off-white head, which leaves some decent random streaky and sudsy lace around the glass as it lazily dissipates.

The carbonation is adequate in its palate-coating frothiness, the body a solid middleweight, and generally smooth, with the hops here seemingly of the gentlemanly sort, I'm happy to report. It finishes off-dry, the citrus character much more noticeable than the vanilla in the lingering morass.

Overall - this is a rather pleasant version of the style, with the vanilla adjunct present, but never overstaying its welcome. Well-blended, and enjoyable to put back, I would love to have the rest of this while watching some classic Flintstones cartoons. Oh, right, fucking YouTube FTW!

Smell is sweet, with distinct notes if vanilla ice cream, mango and pineapple.

Taste starts with sweet vanilla, follows with lots of citrus and ends with a fairly mild bitterness. Well balanced and easy to drink.

Overall, a very cool beer. Omnipollo do really fun things with lactose in beer, and while this is less out there than I hoped, the vanilla just works very well with the base beer.

Hazy golden color with off-white head. Aroma has biscuits, cookies, milky notes and floral hops. Taste starts sweet with butter biscuits but gets more bitter and hoppy on the finish. Medium body with medium minus carbonation. Overall it's a really interesting beer with a nice balance of hops and malts.

T: Hoppy, malty, bitter. Not as juicy as I hoped.

O: Good IPA but expected more juiciness from the aroma.