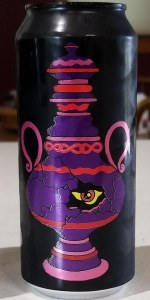 Notes: Invited to brew in the US I wanted to use local ingredients. Agamemnon is an Imperial Stout brewed with maple syrup. Boiled 7 hours.
-Henok
Imperial Stout, 12.5 % by vol.
Brewed at Pub Dog Brewing in the USA.
Artwork by Karl Grandin.

View: Beers
Reviews: 86 | Ratings: 327 | Log in to view all ratings and sort
Reviews by NeroFiddled:

Notes via stream of consciousness: So who was Agamemnon? Homer's "Odyssey", right? No, it was before that, it was "The Iliad". Whatever. I'm not sure how the label design ties-in unless that vase or vessel with the eye looking out of it is somehow supposed to be like the Trojan Horse and represents the can of beer that you're holding. Again, whatever. It's an Imperial stout brewed with maple syrup and "natural flavors" - I wonder what those are - at 12.5% alcohol by volume. It's poured a very black-brown color beneath a dark tan head. You could even say it's russet brown. It's completely opaque when held to the light and I don't even see any highlights. The aroma displays a little bit of the maple syrup over a fairly rich chocolate and cocoa powder base. Not bad. On to the flavor... there's more fruitiness to it and a bit of a molasses note. I thought there would be more alcohol but there's really no more than you need. The maple syrup kind of sticks at the back of the mouth in the finish which is a little distracting - I've only had one sip and I'm saying that, but maybe it'll clear up. What else is there? Well I'm finding apples, berries, raisin, fig, and even cherry in the fruitiness. There's a little bit of acidity to it but i think that's from the dark malts. It's not as rich and sweet as you'd expect given the aroma. I'm getting some caramel, mainly golden and medium, that kind of golden-red caramel that you get before it starts to brown. There's some nuttiness to it, and of course roastiness. It's earthy as well and I'm think more of roasted chicory than coffee here, although I'm not ruling that out. The maple syrup continually pops in and out which is nice, but the fact that it kind of sticks in the finish is still bothering me. I think that has something to do with an addition of vanilla flavoring as well. I get that extract and the alcohol that was used to obtain it kind of thing. It's definitely not real vanilla, and that coupled with the sticky sugar of the maple syrup is its biggest hiccup. If this wasn't a sipping beer where you spend a fair amount of time between sips letting your mouth clean up I'd say that was a major defect. Back to the flavor, what am I missing? I'm not sure I'm missing anything other than pointing out the level of bitterness. That's not to say that it's not complex, but in fact it's not THAT complex. What's there is nice though. Back to the bitterness, it's clearly there although it is a little sweetish upfront. There's also a lot of fruitiness and some acidity upfront though so it doesn't come off as sweet. Basically what I get is somewhat sharp fruit and medium dark chocolate and caramel, followed by less fruitiness and more sweetness going into the middle with some of the maple syrup showing, and then a quick drop off at the swallow with the bitterness rising with some dark bittersweet chocolate and then the fruitiness returning. The maple syrup then remains in the finish as everything else fades, although there is a bit of fruitiness and bitterness left behind. So, what I can at the very least say here, is that I've never had a beer exactly like this. The head held well for a beer of 12.5% ABV, and it's left some very nice lacing. It's not a 4.5 out of 5 but it warrants a 4.25 for sure. In the mouth it's full in body leaning towards full-medium, and oily and slick. The carbonation is fine-bubbled and moderate leaving it velvety smooth. Conclusion? It's well-brewed but I don't feel that the recipe is as balanced as it could be. I think the artificial flavors damage it, and that the maple syrup isn't exactly where it should be. I'm not impressed. It's a nice, big and strong malty beer but it falters. In the end I think it's just trying to be too much in an attempt to be different. It's achieved the different part, but at the cost of the overall.
Review #6,877

Aroma has notes of roasted malts, some light maple syrup notes, and molasses.

Taste has notes of rich roasted malts, almost charred. Light notes of vanilla, maple syrup, coffee, cartelized sugars with an surprisingly pronounced bitterness on the finish. Beer is very hot - really warms the throat and stomach as its consumed.

Overall this is a beast of a beer. Very hot - to my palate its just too much.

A: Poured from a bottle to a pint glass. Had a jet black color and a thick, impenetrable consistency. Almost no head to speak of, but a decent amount of lacing.

S: A nice aroma of chocolate, malt, a little coffee, and a sugary element.

T: Tasted of roasted malt, a good dose of chocolate, some coffee (but not a lot), and the advertised maple syrup (this ingredient doesn't make a huge impression, but it is welcome). A big, complex, powerful flavor. Very, very tasty.

M: A below average amount of carbonation, but a super smooth and creamy finish. Full-bodied.

O: A well made, easy to like stout. Definitely drinkable.

Pours black with cola edges and a small tan head. The aroma is of milk chocolate, vanilla, caramel, roasted malts and stewed fruits. The taste is a rich mix of chocolate notes and dark malts. Solid bitterness in the back with retrained, fruity hop notes. The mouthfeel is full bodied with light carbonation. The finish is moderately bitter and roasty for ages. Alcohol is very well hidden throughout.

This is a fantastic Imperial Stout. Very complex and quaffable. The vanilla and maple syrup and lots of nuanced flavors. A must try.

22oz bottle split and poured into a snifter.

A: Pours a thick very black with a mahogany head. Leaves some spots of lacing on the glass. Head remains as a thin film throughout the glass.

S: Roasted malts blended with coffee and chocolate. A bit of smokiness to it. Sweet maple syrup as the bottle indicates. A touch of booze in there hints at things to come.

T: Starts off as a full bodied wholesome stout with a strong roastiness. After swallowing dark fruits, tobacco, alcohol, coffee and carmel come through.

M: Has low carbonation and a full body. I like the creamy mouthfeel that compliments the bold flavors. Some stickiness comes through from the sweetness.

Overall maple syrup makes a great compliment to the strong stout flavor. Great looking bottle made this an easy sell. Give it a shot if you're into bold and complex beers.

Black as hell. Mocha brown head with great stickage. Looks like motor oil, for sure.

Silky, yet soft, too. Has some suds, not many but some. Feels good and thick.

A very good impy. Love how the sweetness turned how to be milder.

Great looking thick beige head hides for just a moment a rich, sweet coffee laden aroma. Rounding out the experience is just a hint of marshmallow. Velvety feel brings with it that same coffee but the sweetness takes on a bit more of a savory direction. Little bit of alcohol and almond in the tail end as it exits very dry and coffee bitter remain.