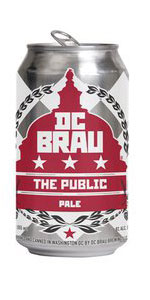 Notes: The Public Pale Ale is brewed in the classic American Pale Ale style. Assertive bitterness backed by C-60 and Vienna malts which lend notes of rich, yet semi-dry caramel. Then followed up with a nice white grapefruit and citrus aroma that begs for a follow up sip.
View: Beers | Place Reviews
Reviews: 197 | Ratings: 918 | Log in to view all ratings and sort

12oz. can served in a shaker pint. Pours a dull, burnt orange with a hat clarity and tight, 1/8th inch, off-white head. Nose expresses light piney/resinous notes. Very similar to the nose in The Corruption; however, more subdued. Taste follow nose. Mouthfeel is light-medium in body with a pleasant, even carbonation and a slight oiliness to the texture. Overall, a decent old school APA but nothing to write home about.

Slightly hazy and copper in color with a half finger pillow of foam on top. The smell has floral and juicy notes, maybe a touch of pine or resin. Soft caramel as well. The taste is pretty hoppy for a pale, showcasing some resiny and piney flavors with a slight juiciness in the middle. A good backbone of caramel and bready malt stand up nicely to the boldness of the hops. Packs more of a punch than some regular IPAs, but has the balance of a well crafted pale ale. Definitely edges the line in a good way I think, hop heads will enjoy this.

April 8th, 2016 - This unabashedly non-partisan brew is accompanying me on business trip, but aside from the novelty there's not much quality here. Perhaps this is a commentary on American politics? The aroma is super sweet and excessively nutty. The flavor is blessedly milder, but has a pumpkin off note. The palate, though flawed, presents as a reasonably decent Red ale, but that off-note is quite pronounced.

This is a 2 year old can from the back of the work cooler, so take this review with a grain of salt. At least it was refrigerated the whole time.
Light copper color with some chill haze, thin white head that dissipates quickly, spotty lace
White grapefruit skin and caramel aroma
Caramel and grapefruit rind flavor
A little sticky for me. Carbonation is right on
Would be better fresh, but probably not by too much

-clear amber tap pour with a thin foam ring and an herbal-pine aroma. The flavor is malt > hops. The malt has a tad bit of toffee sweetness and the hop flavors are resinous and moderately bitter. This has a clean mouthfeel and finish. It is a bit different and appreciated.

Very nice pale ale! Served in a shaker pint at Ronald Reagan. Tangerine liquid that leaves rings of soapy lacing. Aromas of caramel, pine, and citrus, reminds me of Short's Space Rock back home. Flavor is aggressive for a pale ale, with kicks of grapefruit and berry finishing to a chewy caramel.

L - Looks the part, although a darker copper color than I expected for a pale ale
S - Still smells OK prior to taste; definitely an older school SNPA type whiff to it, but
T - where it falls apart for me, like a poorly malted IPA, with little interest and a weird "graininess" to the palate impression
F - Fine, good carbonation, but can't get over the malt grain taste, little hop impression here...
O - Meh, but I'm glad I tried a DC local beer while in D.C.

Poured Amber, not much head, but that's probably because of the place I got it at.

Mouthfeel is medium bodied with carbonation just north of moderate. Some alcohol warmth, not harsh.

This is a pretty decent pale ale. It could maybe use a touch more sweetness for balance, but it's still very much a drinkable beer.

Picked up a six pack of cans when I was visiting DC. Had liked The Corrputiin IPA on a previous visit. In my opinion this beer isn’t as good but I still liked it. Nice smell from the can and taste is very bitter. Pine and pepper not much citrus. Leaves the palette dry and wanting more.

12oz can, about 3 weeks old. Served in a shaker pint glass. Pours a darker caramel orange body, one finger white head, good retention, bit of lacing. Smell is pine, touch of citrus, moderate caramel and a bit of toffee sweetness. Bottom line is that the malt is on the forefront here, with the hops playing second fiddle here providing bitterness on the backend. Flavour is caramel, toffee, a bit of toasted grain, citrus and touch of piney resin on the finish. Standard, straight-forward APA, more of a traditional variety almost like an Americanised ESB. Mouthfeel is medium lighter bodied, moderately bitter citrus zest and resin on the finish, good carbonation. Solid APA, nothing too crazy to write home about. Worse beers out there to drink a pint of after work.

Poured from 12oz can into pint glass. Pours a thin off white head that drops quickly with no lacing. Color is cloudy orange. Aroma of citrus and bread dough. Mouthfeel is light to medium with a damp finish. Flavor is hop dominate with grapefruit and pine along with lightly toasted malt.

Picked this up for tonight's college championship game. Pours a dark amber with a nice head and a balanced nose. Flavor is similar, with caramel and medicinal hops working in tandem. Enough spice and bite to be interesting, but tame enough for easy drinking. Texture is more relaxed and less carbonated than most pale ales, and a little creamier because of it. This seems to be a solid pale ale with the flexibility to be a oe off or sessionable. I continue to be impressed by the folks ast DC Brau.

Straightforward and well-done. Hops are grassy but not overly-bitter, the malt backbone has a nice black pepper spice tickle along with classic Bavarian notes.

On tap into a shaker pint glass at Fire Works Pizza. Reviewed from notes dated October 16, 2016.

A-The beer arrives with one finger of off-white head. The foam is sticky and leaves nice, fine lacing on the glass as I sip. Head retention is good. A chill haze clouds the beer, which was probably served too cold. Color is light-amber caramel.

S-The aroma suggests an English IPA to me with substantial malt notes of caramel. It isn't terribly sweet, but it is malty. Hints of orange and mild pine aromas fill things out. The beer smells simple, but there is nothing off.

T-The taste tracks the smell closely. More caramel malts that I would expect for a beer labeled an APA...again, I'm thinking English IPA. Maybe the keg is old and the hops have faded? Anyway, bitterness is on the light end of the spectrum and the simple orange, grapefruit, pine flavors are pleasant enough when combined with the caramel malt.

M-The body is heavier than I would like for a pale. Carbonation is semi-crisp and moderately assertive.

O-This is a decent beer, but it is not what comes to my mind when I think of a pale ale. I also found it to be a bit on the heavy side. Criticism notwithstanding, I would like to try this again fresh.

Pretty nice solid IPA. The hops were pretty subtle, but the balance of the beer was pretty good. It was easy to drink, but probably not a fave of many hop heads.

12 oz can into pint glass

Poured copper colored with almost no head. What head it did have dissipated quickly.

Smell had notes of grapefruit, pine and grass. Subdued overall, but individual aromas were still there.

Taste had flavors of grapefruit and orange zest initially giving way to a strong malt backbone. Caramel and bread malts were noted followed by a piney grassy bitterness. Bit of sweetness noted throughout but gives way to a bitter finish.

Feel was nice and crisp, light and drinkable.

Overall an good APA. Nothing special or worth seeking out again though.

Spending some time in DC this summer and trying to get around some of the local brews. I picked this up along with a six of "The Corruption," DC Brau's IPA. I don't ever really use my reviews to compare two beers, but this time it seemed really necessary. I feel that far too often, especially when trying out a new brewery, we (a lot of us anyway) skip right past their pale ale and reach for the IPA, figuring that it's a better flagship type representation of the brewery. This beer is right when that assumption could be wrong. When compared to their IPA, DC Brau is pulling off a lot more in my opinion with this beer. The Corruption is somewhat one dimensional, the malt doesn't seem to work with the hops as well (in that their overpowered), it's only .5% higher in ABV, yet the alcohol is perceived much more.

I actually think that this beer is underrated on here. This is one of the better, more complex pale ales I've had in a while. I'd drink this any day of the week. Both the malt and hops contribute to a bitter backbone that is balanced out by some floral almost honey caramel sweetness and a little grapefruit in the end.

I'll pick up more of this.

Very much like Dale's Pale Ale! De lish!! -- Had on tap at Paleo in DC -- actually better on tap.

Yes in the bottle it is not as good, so I'll have to knock rating down -- has a harsh aftertaste. Head does stick around nicely.

The beer comes in a comes in a medium to deep amber. Looks almost like amber ale than a pale.

The flavor follows with caramel, rich sweet whole grain bready sweetness, a sweet roll, hints of floral, but as that sweetness subsides, medium minus bitterness comes through with a herbal, tea flavors and light earthy bitterness.

Despite being 2 months old, the beer is wholly bready in flavor, while drinking quite balanced as an American Pale Ale. The hop flavors and bitterness helps, but it is a fully malt forward pale ale.

I had been wanting to try DC Brau beers for a while. I wasn't sure what kind of beer it was per se, just that it was a single DC Brau, was happy to discover that it was a pale ale, per se. Being a huge fan of pale ales of various varieties, found this to be a satisfying and semi Double/Imperial reminiscent pale ale. The alcohol content isn't really too heavy, nor is the hoppiness, but the hoppiness is quite nice.

One can really get the caramel flavor from it, especially by tasting the head per se, upon first pouring it. The hop shell taste is quite good, and lingers with the sort of hints of caramel cirtusyness after one has a drink of the beer.

The beer/ale overall isn't too heavy or syrupy per se, it has a nice sort of rich root-beer-ish color that is quite appealing, and overall I'd say that this is a great beer/ale.

12oz cans. Had several of these cans in order to decide on my rating. Pours with a wonderful hoppy citrus scent. This is a little more on the hoppy side compared to most pale ales, but is light on the palate and easy to drink. Citrus is up front, mixes well with the light amount of caramel malt and does not linger with any undesirable flavors. Very drinkable and tasty.