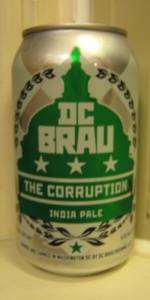 Notes: The Corruption™ IPA is DC Brau's take on a Pacific Northwest IPA. Brewed with Pale 2 row, C-10, Honey and Victory malts. Exclusively hopped with 40 lbs of Columbus hops per brew to ring in at 80 IBU. "The Corruption" comes in at 6.5% ABV. This beer straddle's the line between IPA and Imperial IPA and has a supportive malty backbone with an assertive hop presence that smacks your mouth with a dank, resinous bitterness followed by pleasant aroma's of pine sap and burnt spruce.
View: Beers | Place Reviews
Reviews: 228 | Ratings: 1,308 | Log in to view all ratings and sort
Reviews by hoppytobehere:

12oz. can from a 6-pack purchased at the DC Brau brewery.

A: Cloudy orange with a little soapy head. Great retention and lacing.

T: Similar to the aroma. Really nice hop flavors in this one. Decent malt backbone.

O: I enjoyed this one, and I love to support the local brewery.

Hoppy! Close to an double IPA... Not bad of a beer.. It's a sleeper.. As you drink it.. You appreciate it more and more

Pours a deep amber orange with a decent dense foam yellowish head. Moderate carbonation. Nice aroma of sugary grapefruit and resinous pine with mild malty background. Bitter in the mouth, the taste is a combination of syrupy malt and pine resin that isn't the best blend but ok. Somewhat of a hop-smack (80 IBUs) but the malt keeps it in check. Not enough hop flavors, just the bitter notes.

Pours a really nice copper with a white head and good retention. Smells like candied oranges and pine tar. Drinks a little more piney than the smell but the sweet tangerine flavors are still there. Nicely balanced, very crisp, not overly bitter but the pine lingers for a while. Overall a really solid ipa. My first dc brau beer and I quite like it.

12oz Can to Pint Glass

Taste: Grassy, and piney from the generous hops and IBU's. Nice bit of carbonation. Fairly bitter at 80 IBU's and has a healthy hop bite. I thought the malts were nice and sweet on the back end.

Overall: Pretty tasty, all in all. IMO it leans toward the imperial side but has the ABV of a traditional AIPA. Would recommend to any of you IPA drinkers out there who like the west coast style.

I picked this one up on a trade. I would like to try the big boy from this brewery sometime. Cheers man for sending this one my way!

Aroma: Some floral hops, not very pungent but present. Malts are not too strong either. It is a very floral forward beer with a mild amount of citrus and tropical fruit notes.

Taste: Clean and crisp are the first two things I would say about this beer. Not a huge amount of flavor. It tastes like a light IPA. Not a bad thing if that is what they were going for. I could definitely see myself tossing back a few of these on a hot day! Its very accessible and I can give it points for that. This would be a good gateway IPA for those IPA haters you know!

Overall: Solid beer. A little bit watered down but not bad really. I enjoyed it and I would like to try others from this brewery!

12 oz can poured into snifter

T: lots of that very earthy hop taste with some malt on the end to erase bitterness very floral and herbal

O: This isn't bad I wouldn't go out of my way to have it again very reminiscent of The Bissell Brothers The Substance. I would definitely drink it again if I came across it though it's refreshing.

Agreed that this beer straddles the line between styles.
Drinks big and thick and even looks like a big bruiser.
Though the taste is alittle subtle it has a candied fruit taste and smell and drinks piney and resiny.
Desent.

In commemoration of backstage politics, the same strong-arm notion of placing Adams in the White House is echoed in the strong-hop presence in this citrusy ale.

Pouring a deep honey-amber hue, the ale shows surprising clarity despite a light veil of haze. Creamy, bone-white and blanketed- the beer's foam caps its body with strong staying power but only lacing mildly.

Lead by citrus prominence, the aromas are front and center with all-things-hops. White grapefruit, equipped with juices, piths and peels all capture the zesty and crisp sense of Pacific Northwest hops along with sprucy underpinnings and fresh cut grass. With just enough toasted caramel sweetness in its scent, the hops are firmly supported.

But its in taste where the ale transpired in reverse order. First off, the toffee malts and nutty graininess gives the early palate a glimpse of "Cracker Jacks" ballpark candy. But that's short lived as the taste of hops quickly take command. Then the grapefruit, under-ripened oranges and grassy/piney taste begin its dominance in the middle before delving toward a resinous dry bitterness of grass and stem.

Medium bodied to start, the beer's creaminess and toffee sweetness fuse together for a lift and expansive mouthfeel. But as the carbonation recedes and the sweetness fades, the beer dries out beautifully and finishes with the dry, crisp, and clean bite of hops. Its resinous dryness and mild alcohol warmth adds to the beers high rate of refreshment and drinkability to close.

The Corruption is a formidable IPA that provides a bigger "toasty" malt support than what's needed for the IPA style. Also its hop character could be more aggressive in order to sell its hop dominance in all facets: aroma, flavor and bitterness. Yet as is, it suits the style well and with find a pleasant home in the bellies of many-a-hop head.

BuccoFan from District of Columbia

Poured 12 oz. can into pint glass. It's a copper pour that ends with a quarter-inch off-white head. Aroma is subtle floral malt. Feel and taste is medium-bodied piney bitterness that goes down VERY smoothly. It laces well throughout the drink.

This is the perfect session brew. It's not heavy, medium ABV at 6.5, and very flavorful. Can't say enough about how smooth it is. Very refreshing beer.

Some citrus, with earthy notes, bitterness is there but could be more present. Malt is present as well.

Had a pint on tap at the Crystal City Sports Bar in Arlington, VA. Excellent all-around Brew with a wonderful hop/malt balance.

Different hops but not unlike Two Hearted w/the malty backbone

Incredible nuance to the hops: Cascade-style perfumed floral-citrus, some Lagunitas pineapple, decent aspirin bitterness at 80 IBUs that dries things out without being abusive, and a hint of oily herbal essence, too. Like other DC Brau, shows what you can do keeping it old school; exclusively Columbus in this case. A thread of caramel anchors it on the east coast. Claims to be between an IPA and a DIPA, like Torpedo, and like that beer, exceeds its expectations/boundaries - better than Wings, in that way. Bright, fragrant, (7 weeks out from canning) and so very drinkable. 4.5

Talking to a local and seeing the average showing here, also hugely underrated.

This beer was canned about 3 months ago, but has been refrigerated for most of that time so I decided it would be worth a try.

The beer pours out into Duvel glass a hazy copper color with a 1/2" head that soon recedes to leave a think layer on the surface, some islands of foam, a small ring around the glass with some irregular patches of leggy lacing. Sipping leaves a stream of tiny speckles of lacing with a few legs.

The aroma has some gentle but full, piney hops backed up with traces of caramel malt.

The flavors initially show off a rich caramel malt backbone that quickly recedes into the background the pine and resins emerge into just bitterness. However the malt backbone re-emerges to temper the bitterness.

The mouth feel is on the full side of medium bodied with moderate carbonation. The finish tapers off into dryness with some residual bitterness in the back of the mouth.

Overall this seems a fine example of an IPA and one with lots of flavor, but that said it is not one I'll be seeking out in the future. The bitterness, for my tastes the focus is too much on the bitterness and while it does not rasp on the tongue as some do it also tends to be what this IPA is all about.

aroma: organge candy at first, with some flowal notes and some pine.

taste: sweet orange and grapefruit with some pine on the end of the taste slight malt backbone, which keeps it well balanced

overall: just a really good ipa from a great brewery. nothing crazy. but very solid.

12 oz. can poured into a Sam Adams Perfect Pint Glass. Liquid comes out a dark orange color, when held up to the light, it glows a lighter orange. Nice creamcicle colored cap that comes up really thick. Bubble sizes vary among large and small. Nice lacing the whole way through, really good looking IPA.

YOu can tell this is an IPA with a lot of quality ingredients. There's an initial sweetness, some quality toasted malt sweetness, and big nice aromas of honey malts. The sweet aromas followed by some nice hop aromas. Some floral and pine, but citrus is the primary. Grapefuit, not quite ripe orange, tangerine and lemon peel, slight grassy aromas as well.

Taste is easily the best part, this is a truly outstanding tasting IPA. There is a lot of sweetness that comes from the huge malt backbone, an outstanding combination. After that the above mentioned hop profile flavors come out. According to the website there's 40 lbs of Columbus Hops used, and its evident, it's a hoppy beer. Lots of above mentioned citrus flavor as well as some natural nectar and pine aftertaste, slight grassiness. Bitterness is evident but not overwhelming. I've had less flavorful Imperial/Double IPAs.

Moutfeel is really good. Closer to full bodied with a perfect carbonation level and really smooth. Nice malt sweetness followed by the earthy hop bitterness and it's absolutely perfectly balanced. Crazy drinkable, and in the can, it's both "crushable" and savable. This beer is so freaking awesome, I'm jealous that I don't live in DC. Easily one of the best year round IPAs that are available. If I lived in DC it would be my stand by IPA for sure.

On tap at ChurchKey. Pours a deep orange color with a thin off-white head. The nose is heavy with pine, grapefruit, and orange notes. The flavor is like an amped up version of their APA with a good bit of pine and citrus, a little malt sweetness, and a pretty solid finishing bitterness that lingers. The alcohol is there but well managed. Medium bodied with average carbonation leading to a long, bitter finish. What a great IPA, I really like what DC Brau is doing.