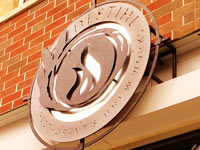 Food was the highlight. Selection was average with several items on the menu not available. Park in the parking deck behind the place, street parking rules are a bit sketchy.

I heard this place brewed sours. I have only had one that I can remember so I tried several here. One I liked, the other was okay. There other beers were good but not memorable. The place was booked up when we first arrived during the dinner hour so we went next door to an Irish pub. DESTIHL looked like it was brand new which was refreshing from the commercial locations I have visited recently.

Had dinner here and really enjoyed the food and beer. it's a upscale brewpub with fancy decor but the food and beer were very good so that saved it. I think our waiter's name was Josh and he was great. Knew quite a bit about their beers and service was fast. Our only complaint about quality was where we were seated. There are these nice booths that are closed in by brick walls which makes them very private except the brick makes the sound from the next booth carry over. Our neighbors were really loud and annoying. One ladies voice was extremely loud and she really talked a lot. Then they had a kid that was throwing fits every 5 minutes and his Dad was threatening him. Made us want to threaten the Dad. I had the fish and chips and it was very good and just the right size portion for me. Others had the meat loaf which they loved but wished the portion was a little bigger and the chicken pot pie which was delicious. The guys really enjoyed the beers they ordered. We would go back but wouldn't sit in the booth.

Stopped here while in Champaign for my daughter's AAU basketball tourney.I had hoped to get to try their Hawaii Five Ale but I settled for their Vertex IPA,which was decent but not extraordinary,and their Barrel Aged Triton Barleywine.Atmosphere was ok,a little stuffier than I had hoped,but service was good and the Triton,although a little hot,was rather good.Vinous and a touch sweet with some subtle barrel character.Prices were pretty standard and overall the experience was a good one.

Check my review from the Normal location, both of them are very well run, make delicious beer, and exceptional bar food at a verrry reasonable price. I could eat here once a week, if not more... and I'm not even rich! Try and call ahead to see if they have any of their barrel or sour beers, as the barrel beers I've had have been fantastic (templeton aged rye wheat wine plz), and their sours are supposed to be the bees knees.

Man, Champaign (my hometown) now has two brewpubs within a block of each other. Houston (where I live now) has none. Why can't the 4th largest city in the US have a brewpub? I digress.

There is a sterile and industrial atmosphere here. One that I am seeing in more in more bars, and I am not a fan. It is either the new it style for pubs, or pub owners are being cheep. Ether way it seems cold to me. The bar is to the left with some tables and booths. To the right on the Neil St side is another dinning area. The brewing equipment can be seen from the Church St side. A few TV's above the bar, but unintrusive. Relaxed, but sterile and pretty much the exact opposite of the Blind Pig. Which oozes uniqueness from every wood poor.

The service is fast, but they are not very interested in much. I want someone working at a brewpub to at least show interest in their products. Here it seems they want to shuffle you in and out with a ticket and some tips. Unimpressed on this front. The food is fairly bland and generic. Some pizzas, some steaks, some chicken, some seafood. A little of everything. They do nothing good, but nothing bad either.

There is a wide variety of beers available. Including a cask mild, which I would have jumped at if I had seen it before leaving. The rest is about 14 taps in all styles. A blonde, hefeweizen, a scotch ale, a few stouts and IPAs (some imperial), a few Belgian styles as well. A Quad, Triple, Belgian Dark. There will be a style you like. Though it seems like they are the jack of all trades, but masters of none. Nothing was bad, and the quality was fine. Just fairly average beers.

Overall, clearly the second best brewpub on the block. Almost the definition of average to me. The food does not really excite me either. I really can't see myself coming here to often over the many other great beer destinations and restaurants within walking distance. Though cheers for at least another brewpub option in town.

Destihl was the second stop in a mini-tour of Champaign's beer scene the wife and I took recently to escape from Decatur's death stench.

This place is new and looks new. Too much so. It's got no character, unlike Radio Maria or Blind Pig. It is cold and corporate, reminds me of BJ's Brewery or a Ruby Tuesday's.

Their beer choices are nice, though. Thirteen beers on tap, including an IPA, a Barleywine, a Hefe, a Quad, a strong Stout and even a 2.8% English Mild. I tried the IPA, barley and sout and were fine. Nothing great, they tasted a bit "too young" and by the book, but alright good. On my second visit I had their Saison and the Hefe and was very pleased. These are flavorful, remarkable beers that were just so perfect for a scorching summer day.

We ordered some food items from the mostly-fried-and-battered menu. We had a hard time digesting the beer-fried bacon, but the chorizo-and-mushroom pizza was super thin and well done.

Service was very good but unctuous, like what you would expect at a chain restaurant. They did really well, though, considering the place was packed for dinner (including families, babies and grandpas).

The next day I stopped by for a beer at lunch time and the place was empty and more relaxed than the night before. Still, the atmosphere is a tad too "blah" for me, but I will come back for their beers (a Russian Imp Stout is on deck!)

Champaign is now home to the 2nd outpost of Destihl based out of Normal, IL. They have been open exactly a month now.

It's on the ground floor of the new "M2" building in downtown Champaign. The bar space is on the corner, and the dining area faces Neil St. Huge windows all around let in natural light, and the brewing equipment is in full view on the corner. To the left of the maitre d' stand is the bar area, with tables along the windows, high tops in the center, and booths along the right side. The bar was a dark stone laminate with two sets of tap towers, and a handpump that was not in use. A couple muted flatscreens were above the bar, with music playing. They were brewing that day, so the sweet smell of boiling wort greeted us upon walking in.

Atmosphere was clean, modern, industrial, somewhat sterile. There was a mixed crowd on a Friday afternoon, from larger groups drinking martinis, to seniors having a late lunch, and bikers just in to get growler fills.

Service at the bar was quick and attentive at first, though later there was a shift change and it took longer to get drinks and settle the bill.

Food wasn't quite as good as the Normal location, though it's basically the same menu. Cheese pizza was pretty bland and greasy, pot roast sandwich was good though smaller than the one i've had in the past.

This location shows promise, I hope they can brew some new beers and start a barrel program (some of Destihl's best beers) like the Normal location.

DESTIHL Restaurant & Brew Works in Champaign, IL
Brewery rating: 3.89 out of 5 with 4877 ratings