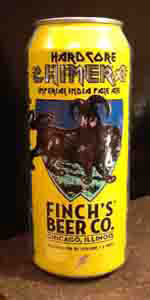 Notes: Hardcore Chimera is an American style imperial IPA brewed with Citra, Simcoe, Columbus, Cascade and Mosaic hops. The beer won a silver medal at the 2014 International Beer Festival in Rhode Island. Ringing in with over 80 IBUs Hardcore's intense aroma and flavor of passionfruit and citrus is balanced out against a hearty grain bill that lends to Hardcore's deceptively drinkable 9% ABV.
View: Beers
Reviews: 140 | Ratings: 973 | Log in to view all ratings and sort

Really generic and muted. I've had year old IIPAs with more hop pungency and depth of hop flavour. Floral, a bit fruity...there's just nothing to this. But hey, it hides its 9% ABV pretty well, so I give it credit there.

Why brew this? So damned mediocre.

Consumed before its best by date, so I know it's not old going in...

APPERANCE: Pours a cloudy yellow body beneath a sleek off-white head. Coating and frothy; ~6-7 minute retention (which is impressive at 9% ABV). Heads appears soft and silky...quite attractive in terms of head but not so much so in terms of body since it lacks the cleanliness and vibrance of a properly filtered IIPA.

TASTE & TEXTURE: Coating and smooth on the palate, yet warm booze-wise. Warm tangerine and booze-ridden Mandarian orange syrup are emphasized, but none of Mosaic's signature subtle blueberry flavour, Simcoe's occasional onion/garlic/allicin flavour, or Cascade's bright floral hops paired with scintillae of grapefruit ever emerge in the mix. It seems dominated by Citra's less intriguing flavour elements with a bit of generic floral hop character from the C-hops in there too.

Not grassy, piney, grapefruity, resinous, juicy, or overtly tropical. Hop profile is rather dull considering the hop varietals utilized; I mean so many IIPAs I've had this year alone have captured the synergistic magic of Mosaic and Citra when used together...this has none of that, nor does it commit to Cascade even to the extent Sierra Nevada's Pale Ale does. Seems like a waste of its hop varietals, frankly.

Too boozy to be balanced. It's Mandarin orange and lychee flavours come with a concomitant syrupy texture that isn't very pleasant, tugging the beer towards an almost slimy mouthfeel. There's some bitterness to its orange-adjacent citrus flavour, but in terms of depth of hop flavour it's lackluster. And showcasing hop varietals is the point of an IIPA as far as I'm concerned...not merely disguising ABV in a loud cacophonous brew (not that this beer's 9% ABV is well disguised anyway).

OVERALL: I don't care much for it or see any reason for it to succeed in competition with the IIPAs that are more widely distributed, less expensive, and better tasting (e.g. Lagunitas' Sucks) and I don't think it rivals the best local or regional expressions of the style available in either my market (New Orleans, which has Parish's Ghost In The Machine and Tin Roof's Santeria) or Finch's hometown (which gets Bells' Hopslam and has myriad Pipeworks and Half Acre beers that make this a shrug in comparison). Average at best in the current IIPA landscape.

Clear when poured. A bright orange with some very light haze.
Very little head
Has lots of orange and citrus with some nice but hidden malt notes
Not overwhelming on the hops & has a nice delicate but lingering finish.
Enjoyable but nothing here to wow you.

Appearance – No head at all over a clear, deep amber-yellow body.

Aroma – Pine sap, but very faint. Not much to it.

Mouthfeel – Puckering with the bitterness. Otherwise not too bad.

Overall – Pretty good but it seems like they didn’t want to add many aroma hops, just concentrate on bitterness.

This beer pours exactly how I like my IPA's, deep orange with a thick looking body. The aroma was pleasant, but didn't linger for very long. Minutes after the pour, I felt I could only pick up the malty character. Taste was amazing. Definitely didn't expect such an awesome taste from the this beer so it was a pleasant surprise. Body carried itself well, to deliver an overall good beer. Very drinkable

Standard pale ale taste. Partial to fruity taste. Had a moderate hoppy taste though not what New Englanders are accustomed too. Maybe it's a Midwest thing.

Look: A fuzzy orange bodied beer with the outsides of it being yellow. I cannot clearly see through the body of it but I can see a shadow of something behind it, like my fingers.

Smell: Notes of fruits with a strong presence of alcohol.

Taste: Similar to the smell except there are only notes of alcohol and a strong amount of fruit here. It tastes like to me that pineapple is the forerunner with the taste here.

Feeling: Plenty of liquor to keep this drink interesting. It isn't too much to make the beverage overbearing though.

Overall: Certainly an enjoyable beer that I wouldn't avoid in the future to get another chance to drink it.

Somebody shared this with me a fairly long time ago. From notes.

Hazy deep orange pour with mild carbonation and a finger of white head that left no retention or lace.

Much of the same follows in the mouth with less boozy pineapple and more dank, onion, and garlic. Gets fairly boozy and more grain comes through as it warms.

Lighter body than it should have. Big bitterness and decent carbonation.

Not my style of DIPA. Weird dankness that didn't work well and made this pretty boring.

I'm familiar with a Chimera, the beast not the beer. A huge fan on strong IPAs theres always a lot to live up to. You expect heavy flavors, warming alcohol and a good drink. This beer hits all the right notes from an Imperial IPA but does so in it's own distinctive manner.

Smells are malt forward, super sweet caramel with a pronounced bitterness, grabbing some pine notes and orange in the back.

Taste is boozy bitter malt. I guess it's what id expect. I'm noticing some pine, but this is DOMINATED by malts. Everybody knows Chimera love malt, so it's fitting.

Pours a cloudy gold with a huge white head that lasts. Incredible lacing.
Aroma reminds me off some Octoberfests with some piney hops mixed in.
Tastes of orange and grapefruit.
Smooth, creamy texture.
This is one I look for every year. Really good stuff.

Pours foggy amber with a huge frothy off white head that just hangs on. Aroma is baked bread, almost like an Marzen. Flavor is citrusy, grapefruit and some pine in the finish. Mouthful is "oily", an easy Brinker for sure. Third year I've had this beer, it's one I always look for. Good stuff.

Almost clear golden color with slightly off-white head. Aroma is mostly malty with some sweet orange peel. Taste follows with some sweet malt and orange and continues with bitter orange peel. Medium body with low carbonation. Most probably I got an old can, it's too malty and the hops are really subdued.

This beer is dangerous. So tasty and smooth that you forget about the hammer of 9%ABV that lies within. It's easy to slide 2 or 3 of these down before you realize that you are having trouble making your lips form words. Good stuff. Be careful.

Superb rocky head which leaves rings of lace after each sip. Orange-amber color with a mild chill haze.

I get a starchy, flowery hop aroma. Attractively fresh.

Solid malt start with a strong white pepper hop finish. Long aftertaste of straight up bitterness. Good body with a reasonable level of carbonation. While unremarkable, this beer puts it all together beautifully.

Pours a murky copper penny color. A nice white foamy head with a bit of creamy character to it.

Taste: again the malt/grain is noticeable, moderate bitterness, the hop finish is hard to tell whats going on, im getting spicy and a bit of orange.

Can opened 4-28 dated E.B. 5-26.
Clouded blood orange hue had to pour carefully into my mason jar to avoid an excessive head.
Sweet malt dominates the nose accompanied by slight alcohol and orange peel.
Taste is very malt forward than gives way to a tounge tingling array of orange peel, lemon zest and finally a little hoppy bitterness .
As I right this this beer is kinda growing on me .
Cheers!

On tap. Poured out a clear, golden amber color with a small, tan head of foam. It smelled of pine, sweet caramel malt and toffee. Very piney with a strong toasted malt backbone.

This is probably my go to double ipa when it is around. This is the best beer from Finch's and a highly underrated beer. It reminds me a great deal of a Firestone Walker IPA. Look is mostly clear, dark golden with some haze. Smells of huge citrus and funk. This is a good mix if floral and dank. The 9% may be a bit much for some, but it goes down pretty well! This is an outstanding example of the style.

Finch's hardcore Chimera 16 oz can from a restaurant bar.

This is a good American-style IPA. I wish I had known the alcohol (9%) before I ordered! The alcohol is apparent in the taste. This is too strong for me to wash down a good meal.

- I can find this on tap and in cans a much appreciate the availability. The tap aroma and flavor is superb and superior, but both have a consistent tropical juice-hop fluff.

T - The flavor is sweet malts followed by tangerine, orange, and grapefruit upfront. The backend of the flavor has a good piney hop bitterness.

O - A very nicely balanced DIPA. The balance of citrus and hops are spot on.

This edged out Graysail 's Captain's Daughter at the 2014 RI Brewfest. I prefer Captain's Daughter but this is an outstanding DIPA. This is my first beer from this brewery and I'm impressed. Massive citrus bomb like the best of the East Coast. Very drinkable and smooth. Well done.

Poured from a 16 OZ can into a pint glass. The appearance is a cloudy amber-orange color with a large white head. The aroma is full of citrus and hops, great smell. The taste is big on hops and spice. An outstanding beer.