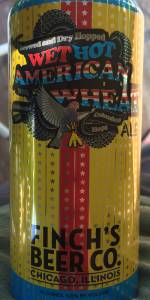 Tastes like a pale ale with a modest but distinctive hop kick in the swallow. I only detect wheat midway in the aftertaste. Otherwise, it's mostly a lightly biting hop infused finish.

Draft at Marie's, served in a branded weizen glass.

Clear golden orange, spotty lace all around the edges. Broken skim across the surface.

Taste is similar but has a biscuity malt presence and soft wheat graininess.

Feel is borderline, watery but slightly smooth from the wheat. Wondering if it's just dirty lines at the bar accounting for the butter notes, though can't be sure. Overall a one and done. Wanted to give these guys another chance but they're not doing anyone proud.

Honestly this beer is hard to nail down.

It's got some european hops with a slight funk kick on the aftertaste. Fairly full mouthfeel for a wheat beer. It looks darker than you would expect for the style.

Smell is kind of bland saisony.

A - Moderately clear, straw body. No head/lacing to speak of.

T - Floral, piney and slight lemon hop character is much more present on the palate than the nose. Sweet-wheat backbone.

Bottom of the can says DRINK FINCH! 00700. No idea what that number is supposed to mean.

Appearance: Super hazy dark straw color with visible effervescence and a half finger of off-white froth.

Aroma: Definitely wheaty but with a touch of something chemical like sorghum. Small bit of citrus.

Mouthfeel: Between thin and medium in body with average carbonation for the style. Fine drinkability but nothing interesting enough to be worth more than one serving.

Final Thoughts: Likely an old can due to some off-flavors and lack of hop flavor/aroma. I could see this one being really good with some sort of added pizzaz like fruit or a burst of dry hops. Just not interesting enough for the craft scene these days. Would I drink it again? Probably not.