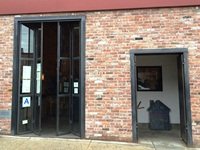 Reviewed by Vode from New York

4.7/5  rDev +12.2%
vibe: 4 | quality: 5 | service: 4.5 | selection: 5 | food: 4.25
Strictly draught beers. No liquor license, and with a tap selection like this they sure don't need one. 61 Local focuses on Brooklyn and the five borough area favorites like Barrier, Singlecut, Other Half, Finback and others. No crap on tap here. Knowledgable staff, excellent and tastefully done pressed sandwiches and such. If you're looking for rarities from further out of town you'll want to check out Bar Great Harry a few blocks south along Smith Street.
Aug 15, 2015
Rated: 4.25 by MichaelLamb from New York

Reviewed by tabhill from New York

4/5  rDev -4.5%
vibe: 4 | quality: 4 | service: 3.75 | selection: 4.25 | food: 4
went here to get some beer from barrier brewing but got there just as singlecut was doing a tap takeover. didn't get any barrier but became a big fan of singlecut. food was better than I expected and it's prepared right behind the bar. the bangers and mash were really good - especially liked the mean beans. the bartenders were very knowledgeable and took the time to describe the different beers and their qualities. will be back looking for some barrier and spicy pickles
Apr 10, 2014

4.18/5  rDev -0.2%
vibe: 4.5 | quality: 4 | service: 4.5 | selection: 4 | food: 4
So there was this night when Phil & I wandered over from dinner around the corner and spotted ‘Skar in the street taking pics of buildings above.
“Hey man, we’re heading over to 61 Local. Come on over, I’ll buy you a beer, kid”.
“I was just there”.
“So go back”.
And we did, wandering in on the madhouse that was Barrier Brewing’s 1st Anniversary party. Located on Bergen, shop set up a few blocks from where Ben used to live, probably because he moved away and this would have been amazingly convenient. Punished for his sins, no doubt...

Big open room with high high ceilings. Up front, tall narrow vertical windows accordion open for the breeze, but no, you cannot pull them open and enter through them, you freak. Use the doors like a grown up, they’re to the right; vestibule action. Forward brick walls to both sides dropping off into not; some cinderblock here, and in other places painted play. It seems the space to the rear was something else or maintained as the floor goes slab from slat wood and the walls go clean white matching the ceiling space.

Off to the left, an “L” shaped brown plastic bar, with a mix & match colored slat wood vertical base holding an inverted logo up front, and seating for it’s hard to say how many as the stools are pulled to the adjacent tables so I may sit. Matching barback counter with stacked glassware and wine taps below; 2 sets of 4 each. Food prep over cooler space further along. Above the bar sits an awesome sprawling elongated map of New York/New England outlined, with various brewery logo pieces placed where they’d be located (although Ommegang needs to be up and to the left some. That shit ain’t in the lower Hudson Valley). The Brooklyn/Queens piece is a functional blackboard, listing the tap selections.

Snacks & small plates (pickles, olives, nuts, hummus), cheese & meat plates, toasts & sandwiches. Ken gone ordered up some, he did. Horman’s best pickles (spicy or horseradish, it will be horseradish), and yes, they were a steal for $1. And an order of the 61’s sweet & spicy peanuts, some heat there, uh huh. But the crazy was the Vermont Smokehouse Toast (Salvatore Brooklyn smoked Ricotta, smoked almond dust, maple syrup on focaccia). Holy crap, that was good, I mean sorry Ken, I’m just gonna pinch another corner, by which I mean this whole piece and I’m sizing up another, which I’ll take shortly, and eye up what’s left, I suppose.

A pair of 4 x 8 tables worn and beaten adjacent to the bar, and some bar counter space alongside. To the rear, a bunch of tables picnicish, alternating vertical & horizontal. Flowers on the tables in pilsner style glasses.

Rows of ink drawings of um, stuff (but hey, when I own my own joint, the stuff I’m going to display will cause seizures). A large wood board tree piece and some light artwork otherwise. Baby water bottle drop bulb lamps tracing the bar & over the tables to the rear, a center room skylight, and wall mounted box lamps with needlepoint covers.

Good list, the beer was clean and fresh, and the foodings were solid. Comfortable enough for my liking. Nice folks here doing a good thing, we like.

Reviewed by henkster from New York

4.2/5  rDev +0.2%
vibe: 4.5 | quality: 4.5 | service: 4 | selection: 4 | food: 4
Visited on a recent Saturday in the early afternoon. We were immediately struck by the interior - lots of sunlight coming from an old skylight; very cool (and comfortable) custom picnic tables and bar top tables. They specialize in "local" beers - with about a dozen taps focused on offerings from NY (Sixpoint, Barrier, Southern Tier, Ommegang, Ithaca) as well as some from NJ (Ramstein) and PA (Stoudts). In addition to enjoying the beers, we also sampled the Brooklyn Brusco (from Red Hook Winery), which was great. We also had both the hard and soft cheese plates, which were very nice. We also enjoyed a couple varieties of the pickles (only $1!). As an added plus, the bartenders were very friendly. With Bar Great Harry only 5 blocks away, you can easily spend an afternoon enjoying great beers in Carroll Gardens. I'm looking forward to my next visit.
Jul 08, 2011

Reviewed by dmgnyc from New York

It's billed as a "public house" versus a bar, and it's easy to see why....the space is large, with high ceilings, and lots of communal picnic-style tables with which to encourage caring and sharing. There are numerous cool artistic touches, like lamps made from glass carboys, and a large chalkboard map of the tri-state area behind the bar detailing the locations of breweries. And in keeping with the "local" theme, tri-state area brews are exclusively what's on tap, including stuff right now from Ithaca, Victory, Captain Lawrence, Barrier out on Long Island (keep an eye on these guys, you're gonna be hearin' more about them soon), and Sixpoint....Lots and lots of Sixpoint...I wouldn't be surprised to see the latter eventually use the place as a test lab of sorts; some of its employees take shifts behind the bar when not at their day gigs, and they featured the completely awesome Triple Sweet Action on tap briefly after it was showcased at the Sixpoint/BA Beer 4 Beasts festival. There's also local wines on tap, and good stuff from Brooklyn Sodaworks (dig the Ginger Lemonade. Like drinking the ocean, but lemony! Really, it's GOOD).

Foodwise, all they really have now are cheese and meat plates that require minimal construction behind the bar. But the ingredients are sourced from some of the best places in NYC (i.e. Dickson's Farm Stand in Manhattan, Salvatore Ricotta in BK, McClure's Pickles, etc.) and reasonably priced. Quality stuff that pairs very nicely with what's on tap.

Overall, this is a fantastic edition to a neighborhood that does not exactly lack for good beer spots. It's an extremely cool looking place, they obviously take their beer very seriously, and the service is great, with the bartenders more than willing to talk shop. It's almost as if they were trying to capture the communal, anything goes spirit of the Brooklyn Flea Market in bar form, and for the most part, they succeeded. Also strikes me as a place that wouldn't really work across the East River; rent would be too damn high, crowds too extreme. But perfect for Cobble Hill. Can't wait to go back.