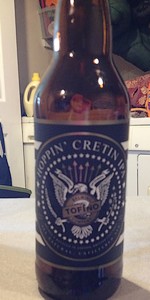 Notes: A tawny straw colored IPA with a hop forward nose that gives off an aromatic bouquet of citrus and mango. This beer has been hopped heartily at all stages of the brewing process and packs enough punch to satisfy any fan of the IPA style the West Coast has become known for in recent years. It is lighter in body with an extremely dry finish. There’s no stoppin’ the cretins from hoppin’.

A: Cloudy apricot with a tight micro foam head, some minimal retention.

S: Big and bold pine resin with sweet musky melon, citrus juice and earthiness. The hops are front and centre, simple and direct but evened out with candy sugar.

T: Hoppy bitters with pine resin and grapefruit pith. Fresh citrus notes with rock candy sugar that compliments the bitters. Finishes with a mild numbing on the palate reminiscent of cloves but lingers fresh pine needles.

O: Bold pine notes and an easy drinker, fresh and uncomplicated - like Tofino caught in a bottle.

I'm surprised (or maybe not) that no one has yet mentioned the obvious.
The label is the first clue, the name the second clue.
This is a tribute beer, to The Ramones! (Song "Cretin Hop"; label image-- well just google "Ramones logo".

Anyhoo-- this is a very good beer.

It is deep yellow in appearance with a tan-tinged head, that sticks around a good while.
It smells hoppy, and it tastes hoppy. Extremely hoppy. And extremely bitter.
It took a while to drink the full bottle, but I enjoyed every sip.

Bottle: Poured an amber color ale with a large off-white foamy head with good retention and some lacing. Aroma of citrusy hops with light bitter notes is pleasant enough. Taste is dominated by citrusy hoppy notes with medium level of bitter notes and dry caramel malt notes with little residual sugar notes. Body is about average for style with good carbonation. Standard West Coast style IPA with quite the hops punch but maybe a tad too much bitterness for my taste.

Hoppin Cretin IPA pours a bright copper with nice head. Great hoppy aroma, citrus, some pine and fresh cut grass and just a bit estery malt. The flavor is hoppy with a slick, almost soapy character. The malt backbone is there, with a nice rounded sweetness. Overall a good IPA, I look forward to filling growlers at the brewery next time I'm there.

Served from a growler poured fresh at the brewery in Tofino, driven back to Ucluelet to the hotel and consumed nightly.

This was the best of their three beers they had on tap. The others have a ways to go to get up to typical US micro standards. This is a new brewery so I'm sure it will improve.

The Appearance was a copper orange hue, decent head retention.

Smell is good, some citra hops likely going on here.

Overall a decent beer and the best one they currently make.

Thanks to FondueVoodoo for this one.

Poured from a 650ml bottle, no #freshbeer info.

On draft at Alibi Room, Vancouver.

Proper citrus hops but still drinkable, without punishing bitterness. Brighter and easier than Fat Tug. Go-to choice for a sessionable BC IPA.

650ml bottle, part of a quartet of this brewery's offerings that just suddenly showed up on this side of the Continental Divide (Canuck version).

The bubbles are fairly active in their probing and zippy frothiness, the body a decent middleweight, and surprisingly smooth, the hops taking a pass on peppering my already fully engaged palate. It finishes off-dry, that tropical fruit thing persisting sans a heavy dose of its inherent sweetness, while the other players keep 'er straight and true, avoiding the ditches like the plague.

I'm not altogether certain what a 'hoppin' cretin' is meant to signify - maybe another way of describing hop-hunting hipsters and hippies? At any rate, the fruitiness of the hops here is much appreciated, as it does well to dampen the initially prevalent dank pine character that I would just as well see die an early death, as least as far as craft brewers are concerned.

Beautiful golden amber bauble, like the colour of preserved sap. Nice soapy head sits atop and stays pretty for a while. I'm into it.

Nose has sweet caramel supporting some grassy and floral and citrus nectar.

Flavour has some grainy malts but they give way pretty quickly to a thin curtain of those sweeter notes listed above: floral/nectar/almost honey-like sweetness and then the bitter pine finish that dominates the back half. It's definitely the dominant character there, but it's not a punishing bitter, more just a lasting effect.

Body on the small side of medium with fine pinpricks of carbonation that support the flavours nicely.

T lots of tropical fruit and caramel, not far from the nose really but a little more malt coming out with some lemon rind

M has some body to it and bubbles cream it up giving it an even bigger feel, just a hint of booze with a mild bitter snap, a little gritty on the palate and sticky on the lips

O perhaps my bottle sat on a shelf a little longer than I like, some malt seems to be coming out but still lots of hops going on

I liked this one but at the same time I might grab another bottle down the road to see if this actually has a big malty backbone or if my bottle was a little over the hill.

Classic West Coast. Been a long time since I've had these flavours in an IPA and it's incredibly refreshing to not have straight juice and low bitterness. Well executed.

Copper with a hint of haze, a swirl of carbonation and a finger of ocher head.

Smells of malts, pineapple and caramel.

Tastes of malts, caramel, a hint of tartness, and a dull bitterness.

I got this in Abbotsford BC and am drinking it in Redding, CA.