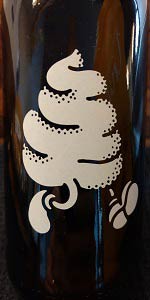 From Saveur Biere. In Teku glass. Playing Bloo Kid 2, then Oceanhorn. Delicious vanilla ice cream with lactose notes and a great feel. As expected, another extraordinarily original offering from omnipollo

Poured to a teku glass.

A: The body is yellow and crisp. The head is minimal but shows good retention.
S: A closer aroma shows a good hoppy and citrusy character. And a farther aroma shows a good and prominent profile of vanilla with a sugary touch. It really smells like a vanilla ice cream.
T: The taste begins with a citrusy touch of pineapple, resin and lemon bring followed with a hoppy flavour. After the sip, there's a delicate flavour of vanilla ice cream.
M: Body is medium. Carbonation is perfect. Bitterness is mildly high. The end of sip is very sweet due to the vanilla end.
O: It's a good APA with a power adjunct of vanilla ice cream. It's chemical witchcraft but it's very interesting.

A 330ml bottle with a best before date of 25th October 2018. Poured into a Lost Abbey teku glass.

Overall: I think they pretty much delivered on what was stated. There was definitely some vanilla ice cream taste, but it also wasn’t the best vanilla ice cream I’ve tasted. At the same time, I’m also not so sure vanilla matches well with a Pale Ale.

HB sliceable litre! And that’s the story: vaguely unpleasant notes that add up to something on concept and yummy. Flawed but compulsive. 3.75

Ice Cream Pale from Buxton Brewery
Beer rating: 86 out of 100 with 17 ratings