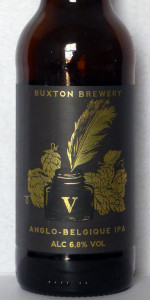 A 330ml bottle with a BB of Jan 2017 (bottled Jan 2016), so it's a bit out of date. Acquired from Trembling Madness in York ages ago. I discovered it hiding in a box - while I expect the hop character has faded I hope it will still be good.

A: Poured into a Duvel tulip. Bottle conditioned. A hazy marmalade-amber hue with plentiful fine sediment and good carbonation. Yields a large head of creamy white foam that lasts for a few minutes before settling as a persistent surface layer. Some lacing.

S: Aroma of fruity Belgian yeast with hints of yeast esters, mild grass/hay, a touch of spice, earthiness and subtle caramel malt. Not much hop action but decent.

O: A pretty decent Belgian-style brew, though the hop character has indeed faded away. Looks great, while the aroma and flavour are dominated by Belgian yeast, malt and subtle leafiness. Good body. Goes down alright but clearly no longer in optimal condition. A lesson for the wise....

Orange, light hazy beer with a three finger high head. A lot of lacing stays on the glass.