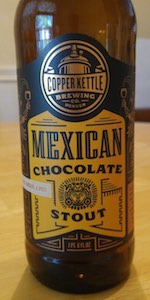 Enjoyed out of a 22 oz brown bottle with no dating that I could discern on the label. That said, after opening it, I'm pretty sure it's fresh, based on the explosion of aroma and flavor that came billowing out of the bottle. Poured into a large New Belgium tulip glass.

Appearance (4.0) - Pours a dark bistre brown, reminiscent of wet tree bark and bordering on black but for a subtlety that belies the muddy hue. Even a fairly aggressive pour fails to yield much in the way of head, with a somewhat frothy half finger of camel colored head topping the body and dissipating relatively quickly into an intermittent film across the surface of the liquid. Lacing is all but nonexistent--just a couple spots here and there on the side of the glass.

Smell (4.5) - Wow. Honestly, it makes me feel like I just stuck a cinnamon stick up my nose, but in the most positive possible way that one could have a cinnamon shoved up one's nose. Just a burst of cinnamon and dried pepper and a subtle suggestion of sweeter dark chocolate in the background. I also get hints of roasted malt that balance out the spice-forward aroma. I almost don't want to drink it for fear of being letdown in comparison to the fantastic smell.

Taste (4.5) - Well, I have to say that the taste holds up quite well in comparison to the intoxicating smell. Lots of cinnamon and spice come through initially, with a velvety undercurrent of baker's chocolate bittersweetness and some subtle roasted char. On the finish, there is a nice kick from the peppers--probably the most pepper-forward spiced stout I've had to date, but the cinnamon and chocolate do a fantastic job of blending and taking the edge off. I've had pepper beers with this much heat that just weren't drinkable. It just goes to show how much complementary ingredients can play a factor in the overall impression of a beer.

Mouthfeel (4.25) - I was a bit afraid that this beer wouldn't have that decadent viscosity that I love about this substyle of beer, and it certainly doesn't have the body of an imperial stout, for obvious reasons. But for a 7% stout, this one has plenty of meat. Medium-to-full bodied, with moderate to low carbonation. By way of comparison, it certainly has more body than a similar beer in Xocoveza, which clocks in at 8.1% abv. I think the hefty spice bill does some of the heavy lifting in preventing this one from feeling too thin. And it's light enough that it's a little easier to drink than the imperial spiced stouts.

Overall (4.25), just a fantastic beer from Copper Kettle; it's quite obvious why this beer won a gold medal in 2011 in the spiced stout category. It's amazing to me that with the seemingly recent surge in interest in this type of beer, that this one doesn't get more love/mention. Perhaps because it's a Colorado-only beer? I really have no idea. All I know is that I will definitely be trying to get more of it at the earliest opportunity.

Picked up a bomber in Boulder in late October 2013 and brought back to Albuquerque, New Mexico.

Poured into a little mini-snifter so that I can savor it.

A- Pours pitch black and comes out of the bottle thick and viscous. The head is minimal but forms into a beautiful dark khaki-color that complements the dark liquid well. The liquid itself is completely opaque.

T- The beer starts off tasting of vanilla, cinnamon and spicy chile and the chocolate and cocoa appear and linger alongside the burn from the chile. As I drink it, I’m very much reminded of the chocolates of Oaxaca.

M- This beer is wonderfully smooth and creamy and there is no alcohol presence whatsoever. The chile and cinnamon give it a different type of burn on the finish, but for a lover of spicy foods like myself, this is a treat.

O- An unforgettable beer and one I won’t easily forget or mistake for any other. I only regret not stocking up on a bunch of bottles of this.

I'll explain because its such a low score compared to others. Our bottle gushed when opening, had the intense aroma of burning plastic, and was quite painful to drink. It actually burned the back of my throat going down. Not sure what was going on with this bottle, but I'm sure this one doesn't represent this beer well. I will try another if I happen to get the chance.

I opened this bottle and it literally sprayed all over my kitchen ceiling, wall and floor. I have never seen anything like this before. Spice and plastic. Infected. Drain pour... then cleaning my entire kitchen.

I was so excited for this one. I'm going to see if I can get a replacement.

This is one bizarrely unique brew. A very slow drinker. Difficult to drink and rate. It's a great pepper brew, but a poor stout. I don't know how I feel about MCS... $12/22oz

Flavor is chocolate, cinnamon, and peppers. The peppers really pack some heat in the finish.

Mouthfeel is a bit thin with high carbonation. I think a softer and thicker mouthfeel would really do wonders for it.

Overall, a very solid take on the Mexican chocolate style. Beef up the body and it'd be a knockout.

Pours black with a small light brown head, moderate to high carbonation. Smell is overpowering spice with chocolate. If you want a Mexican chocolate assault, smell this.

Taste is similar to the smell. Spices is are on the forefront. Now the chilis come through a little. Definitely some chocolate in the background.

Mouthfeel is surprisingly light. Overall, it's too much cinnamon/nutmeg/whatever spices for me. It's not bad.

Big thanks to beatenbyjacks for this one. Poured cold from the bottle a deep, dark, thick milk chocolate black to a surly darkness 10oz goblet with a 2 and a 1/2 infer foamy tan head with nice retention, leaving a sheet of lace.

Aroma of spicy chilis, cacao and hints of cumin.