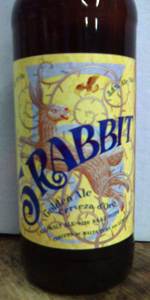 Notes: 5 Rabbit is an elegant beer that shows hints of light caramel and honeyed malt notes, carefully balanced with a sophisticated European noble hop aroma, with fruity and spicy flavors.

I bought this single 12oz brown bottle at the Binny's store in Bloomingdale, IL as part of a build-your-own six pack for $9.99. No freshness date and no other information about the beer other than that they use Saaz hops in brewing it.

The beer poured a hazy golden/yellow color and only produced a half finger of white head that dissipated in less than a minute. Lacing was OK.

The beer had a very grassy and floral smell along with a touch of citrus and a touch of butter.

More hop flavor than malt flavor to this one. Grassy and spicy hops impart a bit of bitterness to the beer while the mild caramel malt stays in the background. There is also an unpleasant medicinal "band-aid" flavor in here mixed with a touch of lemon citrus. Not all that good of a taste to me.

This is a light bodied beer with medium carbonation, but I can't call it refreshing with that medicine taste in there.

This is my first offering from this brewery and I am not impressed.

When I first opened the beer up, it gushed out, then I poured into my pint without it billowing over so I figured maybe it's not infected. Appearance is a light hazed super golden color with a nice cloudy white head with fine lacing patterns. Aroma has spicy saaz hops with some wetcardboard and band aid notes, very diacetyl in nature with hints of tart apples and a spicy yeast variety. I can't not drink this bomb and think it's not a butter bomb. Flavor hits every part of the palate a strong bitterness with the diacetyl buttery quality amongst a fruity light malt bill and spicy yeast with healthy Saaz additions. I know nothing about Minhas which is the brewer they are contracting with, this brewery seems to be a Latino brainchild celebrating some of the Aztec roots with modern brewing technques, however they may need to re-invest in a new contract brewer consider the levels of off flavors I'm getting. Some brewers go for this and others are scared of it, one brewer who knows how to use it is in So Cal Alpine brewing. However this reminds me more of the New England brewer on an Allen Pugsley system that I just can't handle the diacetyl levels on. Mouthfeel is a bit cloying, because of the off flavors band aid/wet cardboard I'm getting sensitive to this off flavor. Carbonation level is moderate to high but it doesn't offend anywhere near as much as the diacetyl butter bomb qualities. Overall I think I've voiced my opinion I also have their dark ale 5 Vulture to try, I will pray for it to not have this level of diacetyl.

12 oz brown longneck poured into a pint. The beer is gold with a thick off-white head. It has very sticky lacing.

The beer has an aroma of grains and some spice notes from the saz hops.

The taste is slightly sweet with caramel and slight spiciness from the hops. There is a little plum and earthiness mid-glass.

The mouth is spot on for the style (slightly thick and a bit slick).

This is an easy beer to pair with food. It is mild mannered and well behaved.

Since I'd heard about this new "local" brewery I've wanted to try their brews. Found some at a new spot and thought I'd give it a go... didn't know they were contracting through Minhas. Sure hope it doesn't have that same Minhas character as their other beers...

A -- Hazy, pale gold with a very dense, white head.

S -- Label says "brewed with Saaz hops" and the soapy, spicy nose confirms it. Light hit of citrus as well, even a touch or diacetyl (Minhas...)

T -- Spicy hoppiness up front, mild biscuit malt follows. Some mild citrus character and a touch of good bitterness at the end and through the aftertaste. There's a little of that Minhas diacetyl character coming through, but it's cleaner than their usual fare.

M -- Mouthfeel is soft and smooth to a bit syrupy. The body is light to light-medium with a dry finish.

O -- Overall I'm happy this doesn't carry the Minhas character through the beer, it's pretty easy drinking and goes down smooth, I only wish it had a little more unique character.

(Served in a tulip glass)
A- This beer pours a clear golden yellow body with a thick head that mushrooms above the glass and last. There is a sea of microbubbles.

S- The slightly musty pale malt and lightly toasted malt have a cream note to them with some Noble hop notes in the finish.

T- The dry fresh malt has a honey and cracker malt flavor to it with a dry crisp snap of Noble hops in the finish. There is a mellow herbal bitterness that lingers after each sip.

M- The medium-light mouthfeel has a tight little fizz that cleans the finish and no alcohol heat noticed.

O- Nice fresh malt and hops flavors with the hops being just a bit stronger but very easy to drink with lot of nice straight forward flavors with some depth of flavor tucked in for interest.

Clear and bright bubbly sunshine and hay color. Good head, foam, and lacing after each sip.

Fruity yeast adds another level to this crisp, toasty, milled grain, and earthy hopped blonde ale. I like this Blonde. I could drink it every season, Especially Summer, and all day.

1/2012:
Trying a single of this again to see if my tastes or the beer has changed at all. I heard they moved production to Minhas, and it says so on the label.

Bright gold, slow ascending carb trails. Ample head of foam, thin collar of lace around the edges. Retention is pretty good, the skim breaks only after the first couple sips.

Flavor is similar, mainly doughy biscuits and sweet honey. A light bitterness in the back end that lingers well into the aftertaste. A bigger sip gets some grape esters from the yeast, which remind me slightly of malt liquor, but there's a distinct dry grassy hop character that builds. Easy to drink, light bodied and a little bland. Overall a basic session beer that seems to have gained some slight nuance. Still would choose any of their other beers over this though.

Thanks Aaron for sharing. Review from written notes.

Pours a pale straw gold with a flurry of bubbles that swarm to the surface. Tight cap of white foam, some spotty lace but nothing substantial. Retains a head for a good five minutes though.

Flavor is very light and fleeting like a macro lager, very mild toasted grain with a hint of honey. Body is watery and flaccid. Plain and inoffensive, seems more like something to cook with. No unique characteristics to make it stand out from the rest unfortunately. More of a transition craft beer for a regular macro drinker, very little here to hold the attention of craft drinkers.

Hey, I like blondes, but the beers, not as much. Yet this blonde has a bit more character - it's not as dumb. She has a darkness underneath (roots showing).

It's golden and clear with little head. The aroma is faint but nice. The taste is right about where it should be. Overall, a well made brew. A little pricey for the style, but I would buy it again.

Served in a 5 Rabbit pint glass at Fountainhead 8/29/11. Thanks to HeatherAnn for the assist!

A: Served a pale golden color with a sticky 1 1/2 fingers of bright white foam on top. Retention was excellent with loads of foam clinging to the glass. Carbonation was relativly active.

S: Pretty grassy. Actually, we were suprised by how grassy and spicy it smelled. Hints of toasty grain and caramel but this was dominated by green grassy hops. Not IPA styled hoppiness, but impressive considering the style.

M: Smooth and relatively thin. A great summer session ale that didn't step all over the inside of our mouths.

O: Impressive. We weren't expecting much but got a nice surprise. Clean and hoppy...perfect for summer.

12oz bottle, another contract brew for a brewery that may very well not know what hell they have wrought, even in their marketing-tinged pursuit of the same.

This beer pours a hazy medium golden straw colour, with one finger of puffy, foamy, off-white head, which leaves some decent hopcone-esque webbed lace around the glass as it quick dissolves to nil.

It smells of grainy, bready pale malt, a bit of generic orchard fruitiness, a little nudge of musty honey, some more or less pleasant leafy, earthy hops, and an admittedly weak (like that's a plus) diacetyl-laced Minhas skank factor. The taste is a lot more of the unfortunate but quite honestly forecasted plastic and rancid-butter laden malt - the purported caramel and honey there, sure, but well obfuscated, with a subtle herbal, and leafy OK Liquor liqueur afterthought.

The carbonation is more or less average, the body medium in weight, and quite cloying in its rendering of any actual smoothness. It finishes well off-dry, the adjunct-sullied malt doing no one any favours, and the other players, in the form of cooked veggies and twisted herbal hops, just making things worse in their rather underwhelming ways.

Sigh, another beer re-marketing plan ruined by a single (or more, I don't really fucking know) meeting with the Minhas clan of lovely Calgary, AB, Canada, through the auspices of their Cheesehead country operation. How many styles have so far been co-opted by the skank that is the SOP of this bunch of accountants masquerading as a brewery?

Pours a slightly cloudy yellow with about a half inch of white head that quickly reduces down to some nice lacing on the top and sides.

Malt, yeast, grass, and lemon. Has a bit of an outdoors character to it.

Starts out a bit fruity, more on the citrus side, orange and lemon notes. Also maybe a hint of pine and grass from the hops, leaving a bit of a floral aftertaste.

Not too bad on the feel, a little watery, carbonation gives it some tingle.

I'd rate this a better than average example of the style. So many pale ales I have tried just are lacking in flavor, this one has flavor, and a bit of a unique character. It is a bit on the sweet side, which is fine by me. If you're looking for an easy to drink beer that doesn't taste like beer flavored water, give this one a try, would be nice on a hot day.

Flavor is sweet honey malts -- not at all complex nor unique. I echo my previous comments, as this one drinks very average -- drinkable, yes, but memorable, no.