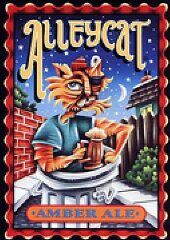 I never go out of my way to review beers by Lost Coast, but this was handed to me as a gift and I have friends who are fans of this one. Poured into a nonic pint glass from a 12oz bottle.

Pours a reddish, amber color (which I would hope), complete with decent 2 fingers worth of a white head, as well as present but not dense carbonation. Lacing is surprisingly present in spades around the glass, and head retention lasts a long while, never fully giving up and turning into a ring. Definitely thickened, which is notable here as far as the standards of Lost Coast beers go. Not bad, but definitely only slightly above average for the amber ale style.

The aroma consists of a caramel forward smell, as well as a bit of toasted crispness, and subtle hoppiness. However, the flavor at hand remains very, very dull. The touch of sweetness definitely works in favor, and I do enjoy how there's a slight earthy hop profile in midst of the malts, but there's something really weird underneath it all, almost resembling cornbread or something. Smells slightly oxidized as a result - not offensive by any means, only mediocre.

The flavor is far better, and avoids crossing with any of the off flavors I was getting in the aroma. There's an immediate syrupy caramel, biscuit flavor that immediately coats the palate, as well as a bit of graininess, maybe some honey, cider, and cracked barley. The finish is filled with slight citrus-laden hops, as well as more astringency from the graininess, and while it's not balanced, it's refreshing and easy to drink. Slightly boozy at the back, which came as a surprise. Never goes flat too quickly, and never too sweet or syrupy - although it almost gets there. Recommended drinking this cold.

This is by far one of the few beers by these guys that I could have several in one session. Very drinkable and tasty, and fairly balanced, although lacks complexity and leans a bit too much on the malts, almost to the point of getting too syrupy. Not bad, definitely a straightforward if only slightly underwhelming amber.

I can't say anything bad about this one. It's a amazing "in-between" beer style. A little dark version, not too malty and not too light. Smells so good and taste like it.

This is one top notch and tasty brew. Dark copper color, a small skin of head, streaky lacing. Caramel, malt with a light hop accent. Mildly sweet with a hint of stinging bitterness. Really, really enjoyable.

This beer is a hazy amber/brown with a light cream colored head, which quickly dissipated. The aroma is heavy of malt with some degree of caramel noted. The taste is mostly malt with a slight touch of bitterness. It has somewhat of a bitter, dry finish. The mouthfeel is full and suits the beer nicely. This is a smooth beer which Id consider a strong choice for sessions.

A decent amber, though nothing special. Has a nice, smooth finish. A nice refreshing beer.

Taste matches aroma: malty with light hops. Some apple and a wood-like flavor in the background.

Overall, very drinkable and sessionable. Definitely worth a taste.

Acquired via trade from paulthebeerguru, so a big Thank You goes out to him. Poured from a 12oz bottle into a US tumbler pint glass.

A: The beer is a deep amber color, with a very thin off-white head that fades quickly and leaves a thin lace on the glass.

S: The aroma is a good blend of caramelized malts, fruity citrus and pale hops.

T: The taste is decently balanced with flavors of citrus and caramel sweetness up front. Then a good amount of hops bitterness comes in. There's a hearty malt character that carries a touch of smokiness with it. The after-taste is slightly sweet.

D: Tasty, goes down easily, not too filling, decent kick, good representation of style, to me this is an ordinary beer overall, but it's still worth drinking several of.

has a very reddish brown color to it, with minimal head. doesn't have a very strong aroma to it, some hops to it but nothing truly distinguishable. my first sip i immediately sense wateryness to it, not alot of body to it. tastes somewhat malty, but nothing great, not alot of uniquess to it. relatively drinkable overall

Pours a very clear light brown color with a thick, fluffy off-white head. Settles into a topographous layer that sticks around for some time.

Smell is pretty spot on for an amber, dry toasty biscuit aroma with a few hints of strawberries and clover. Has a very nice floral and mildly citrus hop bouquet.

Mmm, this is a pretty good amber. Very biscuity and sweetly malted. A bit of toasty malt and west coast hoppiness balance things out for a nice clean finish with a touch of lingering bitterness. This is my first Lost Coast beer and I must say, I'm impressed. Very tasty, not boring at all for the humble amber style.

Another beer from a 10-pack of summer brews from Cost Plus. This one came in a standard 12oz. brown bottle with the unusual Lost Coast artwork on the label and no freshness date.

A light amber-red with a short lived 1/2" beige foam head with good clarity and carbonation. Very little lace was left behind.

Somewhat sweet and very roasty caramel malt with a bit of grassy hops...this is the aroma, as well as the taste. This is one very tasty ale and very balanced at that.

Smooth and rich malt flavor with a medium body and a nominal ABV make this an easy sessionable beer. A real nice amber ale that is a credit to Lost Coast, give it a try!

We did a blind taste test between this beer and 4 other amber ales to objectively determine which one was best. The beers were Full Sail Amber, Anderson Valley Boont Amber Ale, New Belgium Fat Tire, Lost Coast Alleycat, and Alaskan Amber. You can watch the video here to see who won:

Alleycat Amber from Lost Coast Brewery and Cafe
Beer rating: 82 out of 100 with 413 ratings