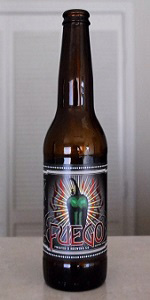 Notes: Clear gold body beneath a short head of white. Limited head retention and lacing. Golden malt and some pepper appear in the aroma, followed by a clear note of pepper in the flavor. It's not really hot but you do feel it. As such it will build on the palate and cut down on its drinkability, but given that it's a pepper beer I think we can throw multiple servings as a benchmark of "drinkability" out the window and simply go with "How much did you like the first one?". One of the better commercially available pepper beers I've had. Worth trying. Nicely done.

Reviewed by KDHicks1958 from Texas

Aroma is fairly standard lager, malty with light hops. No jalapeño evident in the nose to me.

The taste is interesting. On tap, it starts as a fairly standard lager, but then a nice jalapeño flavor comes in at the end. On tap, it doesn't have a lot of the burn, but a nice amount of the pepper flavor. In the bottle, the burn is a bit more evident. However, it's not overpowering at all, just a light burn in the back of the throat as you swallow it.

Overall, this is more a beer I would drink with a meal, rather than a straight drinking beer. I think it really complements barbecue, and Mexican food.

Rated by Agriverbear from Texas

Rated by bundy462 from Texas

Rated by Jacobus79 from Texas

Rated by neilp55 from Texas

Rated by Danielahouston from Texas

Reviewed by AlCaponeJunior from Texas

3.94/5  rDev +13.9%
look: 3.5 | smell: 3.75 | taste: 4 | feel: 4.25 | overall: 4
Well this is a chile beer, that's for certain. However, grouping this beer with a beer like Rogue Chipotle doesn't really lend itself well to a proper comparison. The beers do both contain chiles, but the chilies are not the same variety (a small, fairly irrelevant point). What is more important, and at the heart of the problem with chile beer evaluations, is that the base beers on which chile beers are based can be wildly different. I've had chile beers based on porters, stouts, lagers, blonde ales, reds, etc etc I hope my point is clear.

This lends itself to the classic beer rating problem of "if it's not an over-hopped abomination of a double IPA, an imperial stout, or a rare whale of a sour or wild ale, it gets low ratings." This is a huge problem, and is the reason why beer ratings are generally not worth a velvet painting of a whale and a dolphin gettin' it on. Despite the obviousness of this fact, I will continue to rate beers, if for no other reason than to selfishly document my own tastings, or to nobly attempt to dilute the bias in beer ratings via my own noble, unbiased observations on beer. [warning: previous paragraph may contain self-serving BS]

Now onto the beer. This may be my first encounter with what appears to be yet another delicious Texas brewery. This encounter certainly lends itself to another in the near future. I even took a chance and went straight for the beer which I felt actually had the highest potential for dislike amongst the three varieties I had to choose from. However, the horrible memories of cave creek chili beer haven't actually panned out in any other chili beer that I have tried since. Thus, I forced myself to resort to the logic of "well nobody would make a chili beer so ridiculously hot that it was undrinkable" again. Possibly faulty logic, but it's worked so far.

This is more of a lagery/blonde ale of a beer style, with jalapenos added (at least from the label, looks like japs to me). As a lager or blonde ale, it's quite good, containing all the sorts of things you'd want from those styles: drinkability, smooth taste, no over-the-top flavors, something that's thirst quenching and you can drink more than one of.

The ABV is slightly high for what I just said, but it's not really a flaw, just a bit higher than I'd want for a typical blonde or lager.

Then the peppers, making this a chile beer. They're real nice. They offer a little heat, a little flavor, a little nose, basically in just the way I like my jalapenos... a little at a time.

I think they did a fine job on this one. Next time I'll try another variety from Twisted X

Reviewed by Gagnonsux from Texas

2.75/5  rDev -20.5%
Not much heat or flavor from the jalapenos and the base pilsener is mediocre too. Taste is too sweet for a pilsner and a bit doughy, with a little heat and flavor from the jalapenos in the finish. Head retention is good, but the carbonation is too low for the style. I really wanted to like this, but like most times I found myself underwhelmed and disapointed by a chili beer.
Aug 21, 2014
Rated: 3.5 by zbooks from Texas