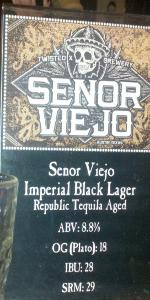 Half pint for $5 at The Whip In in South Austin. I haven't heard of anywhere else having it.

Spicy, chocolate and vanilla, earthy. Tequila and oak presence is nice. Reminiscent of a lagered Baltic Porter mixed with a not-so-big barrel-aged porter or stout. Silky mouthfeel, lowly carbonated. Not too heavy, esp. for 8.2%.

I was intrigued by the big black lager aspect, but moreso, the tequila oak-aged aspect. The aroma is definitely its most impressive aspect. For a lager, I'd like crisper and more highly carbonated. Given the tequila oak-aging, I'd prefer something more robust and chocolately or earthy. That being said, it's an ambitious beer that's worth ordering.

This Schwarzbier has been "imperialized" (alcohol content increased) and then left to age in tequila barrels (used Jack Daniels barrels which are then used by Republic Tequila to age there tequila to Repasado or Anejo styles). Aging this unique beer in tequila barrels adds subtle flavors of vanilla and oak while the tequila adds a mild citrus/agave sweetness. At 8.2% alcohol by volume Senor Viejo is our strongest, most seasoned beer.

About the name:
Senor Viejo meaning “very old man” or “the old one” or "Veteran". Schwarzbier, or "black beer", is a German dark lager beer. It has an opaque, black color and a full, chocolaty or coffee flavor. Although they share some similar flavors they are milder tasting and less bitter than British stouts or porters, owing to the use of Mexican lager rather than ale yeast and no roasted barley.

Tastes of caramel, a bit of vanilla, slightly roasted malts, a dab of syrup and a sedate, lingering tequila character.

Light to medium on the palate and smooth and quaffable despite the ABV.

Liked this one more than I expected.

On tap at the Draught House at the 43rd Anniversary party.

The beer pours a dark brown color with a tan head. The aroma is a mix of lightly roasted malts with just a little bit of cocoa, as well as a little bit of oak and some spice. For a beer that has more than 8 percent alcohol you can't really detect any in the aroma.

The flavor is where the tequila aging becomes more evident. I get quite a bit of earthiness and oak in the flavor, as well as some of the lightly toasted/roasted malt from the aroma. There is a little bit of spice in the flavor, possibly from the barrel aging. The chocolate from the aroma was not really present in the flavor. The alcohol is well hidden.

Had on cask at Craft Pride. Unreal...

No bottling date that I could find.

A: Pours a very dark brown; not quite black. Tall, fizzy light brown head. Quite good head retention with lots of spiderweb lacing.

S: Interesting. A little oaky with some burnt bread. Very light char. Maybe a hint of tequila but it's hard to tell.

T: A little tequila up front mixing with a charred bread and some nice mild fruitiness. Kinda reminds me of a jam of some kind. Charred bread with marmalade and a side of tequila? Now that's a beer I can get after. Nice clean aftertaste with just a hint of char and tequila.

O: Surprised at this one. Tequila aged schwarzbier. Drinkable, complex and balanced. The flavors work. Nice.

S - Light roasted malts, pleasant oak, vanilla and some tequila. Not overly complex and the flavors don't really jump out at you.

T - More lager qualities here. The roasted malts and oak kick in along with some tequila spice.

O - Interesting combo of styles and aging here. It really all works well with a black lager that is tequila barrel aged.

On draft at Whip In, Austin Texas.
Really nice tequila kick to differentiate it from the whiskey barrel crowd. pretty beer, The brewer Twisted X, referes to it as an imperial black lager and I agree.
I liked the color and sipping quality, I also really liked the tequila reminder that came after.

Senor Viejo from Twisted X Brewing Company
Beer rating: 86 out of 100 with 57 ratings