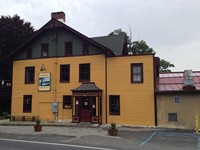 3.93/5  rDev -7.5%
vibe: 4 | quality: 4 | service: 3.5 | selection: 4 | food: 4.5
Vibe: The main dining area feels like a rustic mountain inn with high ceilings and exposed wood with a fireplace. The outdoor deck and some of the tables inside have great views, overlooking the surrounding apple orchards and the Shawangunk Mountains (The Gunks). There is a separate bar area. Even though it was only a 5-minute drive from Exit 18 (New Paltz) on the Thruway it definitely seemed like it was off the beaten path. It seems like the restaurant attracts a lot of locals.

Quality: Beers were served in the proper glassware at the proper temperature. They were also available in half size portions.

Service: All of the wait staff were very friendly—one of them even came over to tell us it had just started raining outside in case we had left our car windows open. The service slowed down a bit once it got crowded but I wasn’t in any rush to leave the place.

Selection: The beer selection was pretty good and included a mixture of German beers and American microbrews. I had the König Ludwig Hefe-Weisse; the last time I had this on-tap was in Bavaria so I was pretty satisfied.

Food: The menu included German and German-inspired dishes, most of which were made with high-quality local ingredients. The portion sizes weren’t too large and were extremely tasty. I started with a pretzel and obatzda, had a roast pork loin sandwich and concluded with a berry strudel. The sandwich served on pretzel bread (the same as I had for my appetizer) and came with a nice serving of potato salad.

Value: The beer and food seemed to be reasonably priced for the area, especially if you are afforded with a table with a view.

Reviewed by madmanjf from New York

4.2/5  rDev -1.2%
vibe: 4 | quality: 4.5 | service: 4 | selection: 4 | food: 4.5
Located in Highland NY overlooking a great view of the Gunks and surrounding areas, is a very old building which has formerly housed a residence, an Inn and a bar. Today, the Gunk Haus caters to German Food, Beer and Hospitality.

With an outdoor beer garden and a soon-to-be open outdoor deck with an outstanding view, the establishment houses a friendly bar and a separate rustic dining room.

On my visit, I was pleased to see a selection of Imported German brews and some micro/craft beers from the US as well as a Belgian. From memory they had: Konig Ludwig Weisse, Warsteiner Pils, Paulaner Original Münchner, Captain Lawrence Kolsch, Victory St. Boisterous Maibock, Leffe Brune, Dogfish 90-Minute, Keegan Mothers Milk. What am I missing? Something good, I’m sure.

Sadly, I neglected to look into their bottled selection at the time; however, upon my next return I will update my review accordingly.

The food menu has a nice selection of German and American cuisine at reasonable prices. As usually, I always order a burger the first time at an establishment so that my reviews have a consistent baseline. This burger blew me away completely. It’s natural local beef from a farm in the area and presented itself at least one inch thick. It was placed on a to-fit in-house-baked Pretzel Bun which you would happily devour on its own. I ordered this with fries which appeared to be naturally cut and spritzed with coarse salt. The fries were accompanied by an addictive Spicy Garlic aioli. From memory, I believe this was around $10 which is very reasonable for the area.

On Mondays, it’s worth noting that they have Kick the Keg specials. For discounted prices, one or two beers will be deep-discounted until the keg is kicked. I like this type of concept; not for the bargain, but it insures that there is a constant variety looping through the tap lines.

Beers were properly poured into appropriate glassware. In fact, I couldn’t help but notice each tap line had a G,H,M,P (Gobblet, Hefe, Mug, Pils) to aid/remind the bartender. Glasses were stored in labeled areas that matched these designations. I thought this was an excellent system for a proprietor to communicate this to all bartenders in a reliable and accurate manner.

Service was extremely friendly. I was sitting at the bar and interacted with at least three people working there; one of which was the owner.

I did have one surprising experience that caught me off-guard. I was running a tab, and one of my beer orders (my second I believe) was for a Hefeweizen which was not a kick-the-keg special of the day. About half-way through the pour, the keg kicked, and I was given the beer and charged half price without being asked if this was OK. This is not customary as I have verified it online here in the forums; however, one fellow BA pointed out to me that in Bavaria, there are beer orders known as “Schnitt” in which you pay half-price for a half-pour. The bartender who was catering to me at the time was from Bavaria so this non-customary approach to me may not have been too unusual for him.

I definitely give Gunk Haus a thumbs-up and hope to be somewhat of a regular as it’s just about within my immediate driving distance. For those who are not fans of German Lagers, do not be shy about checking the place out. They are clearly not limiting themselves to German Imports and/or Styles.