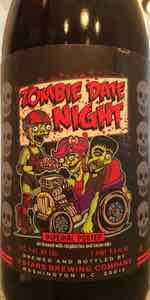 Pours jet black with a thin fleeting brown head a thin layer of which stays around the edge. The nose is mostly tart raspberry jam with a bit of cocoa and a whiff of alcohol at the end. The taste is pretty much the same as the smell with some nice roasty malt thrown in. The raspberry is not sweet or cloying and fades into the malt and a bit of alcohol. It feels a bit thinner than it tastes. I got this in 16 oz. cans, I'm definitely going back for more! Can't wait to try it at the brewery once we're allowed to do so.

Poured hard from a can into a snifter glass, resulting in a just a bit of head that faded to almost no lacing. Smells of roasty malt and raspberry. Taste is similar, a bit bitter roastiness, but faded to more raspberry as it warmed. Pretty light bodied with light carbonation, a bit too light on the body. Overall good, but a bit strange.

From a can, pours as opaque black with a two-finger frothy tan head. Aroma of Raspberry syrup. Taste is very sweet like chocolate covered raspberries, some roasted cocoa and vanilla. Overall, kind of a flat watery impression like an open soda left in the frig. Really mixed bag.

Had on tap at the brewery, so it was fresh. They handed me a glass with no head at all, almost black in color. Tastes of coffee and raspberries, a bit sweet but otherwise good and drinkable. Not a lot of depth to the flavor, it fades fast, but again what's there is enjoyable.

Dark beer with a light tan head that leaves little lacing. The aroma is raspberry, raisin, chocolate, tangy roasted malts. The taste is sweet raspberries and chocolate. There is some tanginess and a bit of roasted flavors. Pretty decent beer with fruit and chocolate.

look =ok, smell = fowl+, taste: can be tasted over the fowlness for the raspberry and chocolate. total belching yuck.
I was loving this brewery and bought growlers of their Madness for a week straight. Great beer. This Zombie beer shows up at the Total Wine and all the wire on caps are already dislodged like the beer is ready to blow up. Me, stupid, trusts 3 stars, and buys 3.
I'm cool with 3 stars because Madness was great. Swing and a big miss on this attempt though.

This is a very deep brown beer that comes out with an espresso head that just burns off. There really is very little aroma but what does come up is dark malts. The taste isn't awful but it isn't great, either. The raspberry doesn't come across as anything more than an unflavored tart quality and the cocoa nibs don't come across at all. The overall flavor is that of a relatively bland porter. The body is lighter, a little thin and a little too carbonated. A rare miss from Three Stars

Got another bottle to retry after a potential bad bottle (see below):
Definitely seemed better, but still seeing it as a beer I'll avoid being "fooled" thrice.

Look is very strange. During the pour, I was thinking this is better than last pour as a nice deep brown head built up. But like a magic trick, wit a little guzzle the head disappeared. Flat looking reminds me of coffee in a glass.

I do get a little bit of the cocoa and raspberry in the nose early, but it still has a cola impression overall. With some warmth

Opening impressions on taste were also a little better than previously. The raspberry was more defined in this bottle, but only as an accent, and that's not a bad thing. I am still missing some sense of roasted notes (or the cocoa) I'd like from this porter. The raspberry cola concept seems to carry through to the taste. Aftertaste has a little cocoa nib lingering, though, that warmth brings forward a tad later in the drink.

Feel is light, overly wet and drinkable, just enough to hurt my enjoyment, but not enough to destroy it. Somehow there is some prickly carbonation in there. Light alcohol astringent tug near end on a warm beer that isn't distracting.

Too much of a raspberry cola mimic for me. It's not like one of those "hard cola" beers, the impression is more subtle.

Original:
I might have bad bottle b/c I not getting what others are. Flat look with prickly feel, soda-like flavor (no sour notes). Might get retry and update.

Annual release from 3 Stars Brewing Company, coincides each year with Valentine's Day. Big chocolate and raspberry character shines above and alongside the big malt notes. Pours black and viscous with a great creamy head. 2016 batch is unreal. Get as much of it as you can. I have several vintages in my cellar. It's delicious!!!!!

Both display a lovely nose of raspberries while the cocoa is stronger in the younger of the two.
The color of the black stout is accented by a bit of red around the perimeter of a brown head which displays well but does not linger long enough for a staring contest.

This is a raspberry-cocoa nibs imperial porter. It is sweet by the standard of beer, but not sweet by the style. It actually has a surprisingly dry aftertaste which tends more toward raspberry than toward porter.

That said, the full taste, for the fresh, reveals a bit too much of the malt and allows the aftertaste (Which I would describe as consistent across the 3 stars Portfolio) to be less coherent and more scattershot.

With a year of aging, the malt rounds out to work with the raspberry rather than counter and displays a drinkability quite surprising for the busy-ness of the material and the ABV of 9.6%.

I love raspberry beers (and raspberries. And beer.) and this is easily my favorite dark raspberry beer. It is sweet like beer, not sweet like desert. Yet... it has all of the makings of desert. I'd love to drink this with some peanut butter s'mores.

This imperial porter does a wonderful job of fusing the chocolate, roasty, rich porter flavors with the bright sweetness of raspberry. I didn't expect the combination to work very well but 3 Stars pulled it off.