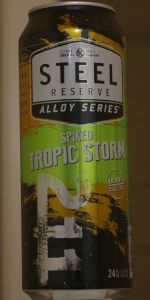 Alien blood green in color with lots of clinging carbonation bubbles. Kind of cool in a Sci Fi movie look of days gone by.
Smells candy sweet. Smells like Fun Dip candy with a bit of dustiness in the smell. Intriguing.
Taste is of candy sweetness with some sour that lingers for a bit after on the tongue.
Feel is like the rest of these alco pops. Sticky and sugary. This one does benefit a bit in that it does finish better than some and feels a bit lighter. Also no hint of the very high ABV.
Overall this is a fun beverage to pop down every once in a while. This is much cheaper than other types of these beverages which does help it gain a bit of pointage.

Obviously a cheap drink. I drink many cheap drinks and craft brews and after trying the entirety of the Steel Reserve flavored drinks, this one was my favorite. My 2nd favorite was the blue raspberry but that's besides the point. What more do you want, it's an 8% 24oz can for $2 dollars and it's obviously not meant to be a competitor for or even in the running for being "a good drink" but, it serves its purpose. It masks the alcohol content very well compared to other Soda Beers and does so at a fairly restricted calorie basis compared to similar drinks outside of the Steel Reserve flavored series. For example, a 24oz can of most Four Loko brews (12 to 14% ABV) runs around 1300 calories per 24 oz can, meanwhile these Steel Reserves sitting at 8% can be around 500-600 calories which means if you slam 2 of these bad boys you'd still be getting more alcohol AND less calories than a Four Loko

This beverage pours neon green and is topped with a fleeting effervescent head.

It has an almost margarita smell. I smell some lime and some pineapple soda.

The taste is sweet. I get lime. I never thought of it as a margarita mocktail until I decanted this bad boy. I can always drank straight from the can as the good lord intended.

If I ain't spending $20 on a four pack of craft beer I buy gas station singles. This hit the spot after mowing the lawn. It was a good change of pace to my usual, Steel Reserve Blue Razz.

It pours lime green with a quickly erupting then quickly dying fizzy white head. Looks like a Mountain Dew soft drink. I hare the way these flavored beers usually look so I tend to grade them low.

The aroma is a pungent lime-like character with a vague grainy malt base and perhaps a fruity hop presence. The alcohol is not really noticeable but it is so sickly sweet. Not a second time.

The body is a reasonably smooth medium texture.

The booze shows up in the taste after the super sweet, lime juice character attacks my taste buds. They say all natural ingredients. I guess that's a good thing but it sure tastes artificial.

Bought a 24oz can $2.00 Times Supermarket
Smells of sweet candy when cold, rubbing alcohol when it warms up
Bright neon green color
Medium mouthfeel
Light carbonation
Taste like a watermelon jolly rancher
Overall it is made for people who like sweet mixed cocktails. Cheap way to get drunk.

Steel Reserve (Alloy Series) Spiked Tropic Storm brewed by Steel Brewing Company, with an ABV of 8.00% This American Malt liquor pours form a 24oz can into a pint beer. The color of this brew is a lime green , kinda like Mountain Dew but darker. There is also a small greenish white head to this brew. The head goes away fast. Little to no lacing. The smell is heavy sweetness mixed with alcohol. There are a few faint grams and malts but they are slim. Now for the taste,it is sweet. It like a mix of lime fruit punch mixed with Mountain Dew an cheap beer. However I am surprised how nice this brew goes down. The body is a solid medium. There is really nothing overpowering about this brew. If you like sweet, lime flavored drinks you should look this one up. The mouth feel is Bold, Sweet, Lime, Soda, Clean Smooth and Refreshing. For being a Alloy Series this is one of the more smoother more enjoyable to ones. Nothing to harsh from the high ABv in this brew. Overall I am going to give Steel Reserve (Alloy Series) Spiked Tropic Storm a 3.50 out of 5. I would look this brew up again giving the opportunity to. Steel Brewing Company, did a super nice job with this brew.

Notes via stream of consciousness: So here we go again with one of these Steel Reserve malternatives. Some can be good, and some can be bad, but let's see. Oh my... it's poured a light green body that reminds me of something that's cooking away in a mad scientist's lab in a children's cartoon. It seems to glow. This would make a great drink for Halloween, especially if you could rig up a light beneath it. There's no head though, which hurts. The aroma is sweetish, and almost like Hawaiian Punch but with more citrus and perhaps a bit of lemon and lime. I guess that's not weird, but at the same time I'm not really used to it. It's a little bit too much sugar and lactic acid for me, but OK... on to the flavor... well, as you might have suspected, it remains lemon/lime citrusy, but also a touch pineapple-like. Would I call it a "Tropical Storm"? No, but it's got elements of tropical fruits to it. It's sweet but not too sweet, balanced mostly by the acidity rather than bitterness. The alcohol might have a part in that as well. In the mouth it's medium in body and crisp. Overall it's overblown in my opinion, but also readily accessible ~ meaning it's sweet and easy to drink if you don't mind that kind of thing.
Review #6,536

Smells like fruit punch with a bit too much lime. It's a fruit cocktail more than a beer - Barely a trace of a malt liquor - which is really what it is. Something artificial about it.

It is zesty/spritzy. Pretty smooth despite noticeable alcohol and over-the-top sweetness.

It is bad. Think fruit punch. Alcohol level, though - is relatively, surprisingly well-covered. Not a terrible drink. But, a bad beer.

This is another CANQuest (tm) entry where I did all of the legwork ahead of time. I am a bit of a perfectionist, but The CANQuest (tm) has taught me to be thorough & NOT CANfusing!

I recently read an entry in which someone was crowing that it was nice, right & fitting to be the first reviewer of a beer that he had added. That's all well & good … as long as you are NOT adding a duplicate listing! Whoops.

For your edification - The Bro. Woody Method of Adding a Beer on BeerAdvovate: 1) Procure said beer; 2) Take & resize a picture for submission so that others may recognize this beer on sight; 3) Check the brewery's website for Notes/Commercial Description as provided; 3) Build the name fully and correctly, i.e. "Snow Cap Hoppy Wheat (Ale)" vice "Snow Cap", relying on the adage that "If it appears on the label, then it part of the full name"; 4) Find out the ABV & add it, even though it is "Optional". There are plenty of resources to get this information.; 5) Once submitted, submit the picture for approval; 6) Submit the Notes for inclusion; 7) At least rate, but hopefully, review your beer; 8) Bask in the reflected glory as others discover the beer that you have added.

From the (massive 24-fl oz) CAN: "Brewed for Extra Gravity & Exceptionally Smooth Flavor".


I Crack!ed open the vent on this bad boy & beCAN a slow C-Line Glug since there was too much at stake to risk a spill or overflow. I was fascinated as the Glug revealed it to be a hazy Neon Green color (SRM = N/A), like something that The Toxic Avenger might CANsume! OMFG! It briefly created two fingers of fizzy, foamy, greenish-white (!) head that quickly dissipated to wisps. Nose smelled like Lime bug juice (think Kool-Ade), which I used to make as a Mess Cook in the Navy. I rarely drank the stuff, but it was great for polishing brass fittings! Ah, my salad days … This was a little too unnaturally green to think of in salad, but it did look like the inside of a kiwi fruit. 8=) Mouthfeel was thin & watery. 8=( Come on, man! A high gravity Lager should have some Ooomph! to it so as to act as a warning to the unsuspecting. The taste was REALLY sugary, like a Mello Yello/Mountain Dew-style pop. Whoa! I think that my heart wanted to Pop! outta my chest about halfway through. The only ingredient that was missing was caffeine, but the FDA put the kibosh to that after Four Loko tried that little trick. It did not taste bad, per se, but it was unabatingly and unforgivingly sweet. It was not a great example of an AML since its flavors did not jibe with the style. That said, I CAN't imagine that its intended audience is going to CANplain. This was designed & intended to get you where you are going in one quick hurry. No muss, no fuss, no drips or runs. It would also be the basis for a mighty hangover in quantity. Finish was sugary sweet. It was like putting sugar on already-sweetened cereal. Phew!