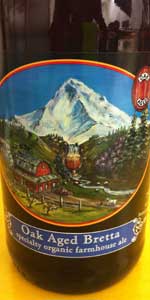 Notes: Our organic Oak Aged Bretta is made with our Seizoen Bretta that is aged for a period of time to develop the wood aged character in the beer. Oak Tannins, vanilla notes and subtle smoky spiciness soften and mellow this beer over time.

The aged unfiltered beer is refermented and carbonated in the bottle with select yeast strains to provide added dryness and complexity, then sealed with beeswax for additional aging. Store bottles upright in a cool dark place and enjoy for many years in a proper glass.

750ml, slightly (bees)waxed capped bottle, the kind where opening it isn't really that big of deal, if you've a knife and a waiter's tool, that is until the crown pops, and beer goes spraying in every direction. Yay, bottle refermentation. Anyways, thanks be to hoppypocket for getting this to me, even though this brewery is directly south of me (I even unknowingly drove right past it a few years ago), and he's way, way, (way) east of me.

This beer pours a murky, gloomy browned apricot amber hue, with, well, a glassful of frothy, thinly foamy dirty white head, which eventually settles the hell down, leaving some sudsy broken chainlink lace around the glass in the process.

The carbonation is obviously off the bleeding charts, still choking up my high palate at this late juncture, the body on the weak side, just, of medium weight, and rather tacky, unfortunately, in its general, workaday smoothness. It finishes fairly dry, the fruitiness not quite fading, but rather switching tact, the funky yeast slowly losing its focused definition, and the herbal, leafy hops starting to wonder what all the fuss is about.

Never having had the base saison, I can only conjecture as to the improvements (or lack thereof) in this offering. That said, the barrel effects are subtle, but noticeable, yet hardly a huge leap - I imagine. A pleasantly funky saison, with wood and hops in more or less the right doses. Ain't nothing wrong with that, though I have to snicker at the brewery's choice to promote the inclusion of Brettanomyces on the label in both Flemish and French, but not in English, or more rightly, American. Huh.

A: A solid copper orange with active streams of carbonation. Topped with a thick and pillowy pale beige head, the head holds up well against the glass and valleys towards the centre. Retention is strong and holds up a concentrated and compact layer of variable foam.

S: Smells of the bretta yeast, with tart fruit - lemons, sour orange & sour plum along with subtle wet wood. All bundled up in a smooth creamy profile, presumably from the oak, offering a creamy smoothness. Tangy and creamy.

T: Forward bretta yeast with sour and pithy lemons, but tempered with a smooth creamy vanilla and soft pepper. Solid mineral flavours that support the bretta and contrast the creamy oaky-ness. Finishes chalky and dry similar to a champagne.
Complimentary & contrasting flavours - all working together harmoniously.

M: Subtle buzz of carbonation up front leading to a tango of creamy chewy-ness and dry chalky-ness. After taste holds and coats the palette with both smooth vanilla creaminess and mineral chalk.

O: Lots of complimentary and contrasting aspects in the smell, taste and mouth feel. It's refreshing and approachable, while still offering complex aspects, reminiscent of a good champagne. A strong beer at 8% the alcohol is not noticeable in the smell or taste. Simple, delicious and approachable.

Thanks to Ryan for sharing this one. Served in a taster pint glass.

A - Big off-white foam settles to a thick cap, leaving splotchy lace behind. Murky dark orange body - either this is unfiltered or the yeast got seriously roused.

S - Tons of oak and brett - guess I shouldn't be too surprised. It's the dirty and farmy brett rather than the fruity strain, and there's a slight medicinal flavor going on. The malt character is very grain-forward, with almost no residual sweetness. The base yeast imparts some phenolic and peppery notes. Odd, but strangely compelling.

T - I like the taste a bit more, as it's got some nice stone fruit and vanilla sweetness as well as a mild sour bite to the finish mixed in with the oak. There's better balance, with more Saison and less wild ale, but it's still a little too oaky for me.

M - Dry, with zesty carbonation, a medium body, and a lightly acidic finish. Tannic and oaky - guess that shouldn't surprise too much at this point. I didn't get a ton of alcohol here either.

D - Nice stuff, but not as amazing as Peche 'n Brett. I found it to be a tad over-attenuated and oaky, but there were still enough compelling flavors to make it eminently enjoyable. I'd be interested to see how this ages.

Acquired via trade
Thanks, libbey!

Hazed, yellow and golden with a moderately sized off-white head that leaves spiderwebs of gorgeous lace all the way down the glass.

The flavor is just as nice as the aroma with the Brett playing the largest flavor role, balanced nicely by moderate bitterness, earth, grass, hay, mild oak, and a little spice.

A joy to drink. I've had this probably four times now and have loved it each time.

Thanks to Tieman for sharing this one at his tasting.

Pours a murky orange with a foamy tan head that settles to wisps of film on top of the beer. Thick rings of lace line the glass on the drink down. Smell is of malt, grain, citrus fruit, wood, and Brett. Taste is much the same with a slight tartness. There is a mild bitterness with each sip. This beer has a good level of carbonation with a crisp mouthfeel. Overall, this is a very good beer with some great aromas and flavors.

GUSHER! All over my desk (thank god it's a shit one from Target). Heavy overcarbonation is now anticipated.

Body colour is a murky glowing pale copper. Not real vibrant. Floating yeast chunks are plainly visible. Translucent but nontransparent. Overall, it looks pretty good for the style, but it's not unique or special.

Sm: Oak. Clean pale malts. Brettanomyces yeast. Biscuity yeast. Floral hops complement the grassy build. Honey. Flowers. Not getting the white pepper notes or subtle spicing I find in the best beers in the style. Soft and inviting. More generic wood than evocative oak, but it's welcome and nicely integrated. Pear, lemon, appleskin. Lightly bready, but it doesn't have the overly done doughy character of an off Fantome, for example. I like the subtle lightly dry fruity notes. Sweet and nectary. Getting better as it warms. A subtle aroma of mild to moderate strength. Fresh and alive.

T: Nectary and sweet, with subtle fruits abound including apple, pear, and lemon. Some lemongrass fills out the body nicely alongside straw, barley, pale malts, pilsner malts, and maybe some munich malts. Honey. It's got the raw feel of a young saison; time might refine the flavour profile. Light breadiness. Clove/clove honey Complementary floral hop notes. Touches of brettanomyces, but it's actually on the less funky side for saisons. Any oak is largely backgrounded; I do wish it were more prominent. Not getting any white pepper or milky notes. There is a light spiciness, but it's nowhere near the depth and complexity that you'd find in Fantome or Dupont's offerings. Some biscuity yeast. Certainly towards the sweeter end of the sweet/bitter spectrum. Flavour intensity and depth are above average for the style. Flavour duration is about average for good offerings of the style. It's not as complex or subtle as great saisons, but for an American offering it's impressive. I quite like it. Well balanced. No alcohol comes through.

Mf: Soft, smooth, and wet. Nectary and sticky. Overcarbonated. Good even presence on the palate. Consistent. Not hot, boozy, or oily. Good thickness. Not overbearing. Refreshing. Very approachable. Complements the flavour profile nicely, but doesn't feel custom-tailored to it.

Dr: Drinkable and enjoyable. Refreshing. Hides its ABV well. Another good offering from Logsdon, but I did hope for it to be great given current ratings. I wouldn't get it again with the availability of superior saisons in the same price range, but it's definitely worth trying once. The oak aging isn't very prominent, which is a drawback; I'm very suspicious of the description on the label: "aged for a period of time." You wouldn't phrase it that way if the period of time wasn't short; breweries usually play up the duration of aging as a selling point.

Best by 04/2018 consumed 11/1/15. Huge fine white head recedes to a finger with good lacing. Very light floral nose. Not getting much oak or vanilla at this point. Overall flavor is light and refined.