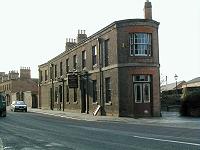 View: Beers | Place Reviews
Reviews: 3 | Log in to view all ratings and sort
Reviews by TheLongBeachBum:

Situated next to the Alexandra Hotel (see BeerFly Reviews), the Brunswick Inn was the World's First Railway Inn. It was built by the Midland Railway Company as part of the Railway Village and had its own Brewery until it was abandoned in the mid 70's, and was sadly derelict shortly thereafter.

It was rescued by the Historic Buildings Trust, and (thankfully) completely restored and refurbished to its former glory by the time it reopened in 1987. It is very close to the current Railway Station, and once again, it now has re-established its own Brewery on-site. Photographs of the Inn, in its former heyday, and when being refurbished, are on view in the Pub.

It is now one of the most highly respected true Free-Houses (bereft of links to breweries) in England. Like the "Alex", a huge supporter of small independent micro-breweries. Cask-conditioned Handpumped beers always include at least 3 of their own Brunswick Beers, as well as Marstons Pedigree and Timothy Taylors Landlord. In addition a real English Cider and a plethora of Guest Beers nearly all from small (often independent) brewers are available. Frequently holds mini-beer festivals and it can get very busy when it does! Lunchtime meals are served, and can be eaten in any of the rooms, including the No-Smoking Room.

A visit to the Brunswick Inn, a real piece of Brewing and Railway Architectural History, was always the first port of call on a Pub-Crawl of Derby, together with the nearby "Alex" as the second stop. Both can, at times, yield a selection in excess of 40 cask-conditioned Real Ales between them, often with many rarities.

You can also come here as the last stop for a quick Pint before heading back to the Railway Station. Enjoy missing your next Train!!!!

Near the rail station, the Brunnie attracts an eclectic mix of old soaks, beer tourists, suits after work and travellers in need of a decent pint when their train is delayed.

Half-a-dozen of their own beers on offer, all brewed on the premises. The dark beers such as Railway Porter and Father Mike's Dark Rich Ruby are particularly tasty. Half a dozen guest beers too, usually including Tim Taylor Landlord and an Everards beer (as it's now an Everards house). Real cider available from the cellar.

Food is filling and fairly cheap.

The flat-iron design of the pub leads to distinct drinking areas; a parlour at the pointy end, several rooms with benches and stools down one side and a cosy bar area with a real fire in winter.

An essential and regular visit for any real ale drinker when in Derby. Only 10 minutes walk from Derby Rail Station, turn right out of the Station and follow the main road alongside the Railway Workers cottages and you cannot miss it. It had the reputation of the highest number of hand pumps on the bar of any pub in England, though that might have been challenged recently! Their own brew Brunswicks beers are always excellent, and usually at least 6 of these normally available along with other guest beers. Spoilt for choice!
The main large room with bar has railway memorabilia on the walls and there are three other rooms adjacent. Some of the brewing equipment can be seen at the end of the corridor that leads to the toilets.

There is a small seating area outside too, weather permitting.
At my last visit the following Brunswick Beers were available -


A haven for the beer enthusiast, and then the Alexander is right next door....you hardly need to walk any further into Derby town centre, unless the Beer Festival is calling you, then you can do that on the return to the Railway Station!


Brunswick Inn in Derby, GB2, United Kingdom
Brewery rating: 3.62 out of 5 with 3 ratings