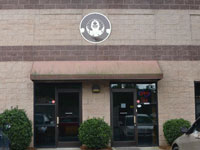 I thought about this before I gave a 5, if there was anything I should drop it down for and I just couldn't come up with anything. They could be a little hard to find at first I guess as they are in the back of a business park and will not be visible when your GPS says you have arrived.

However, one you are inside it's great! We have stopp several times traveling through Charlotte and have never been disappointed. They can be a bit crowded, as they were last time we were there but we expected it at 5PM on a Friday!

The beer: Simply put its fantastic. They have a nicely varied menu that changes often. Last time there I had a 15% Vanilla stout that I never would have guessed to be 15%. It was so rich and smooth. I am not a huge hop head, so I can't comment much on that side of the menu. They do a lot with peppers, and if you like spicy beer they usually have at least one on tap. I have had their Raspberry Jalapeño Porter and it was pretty good. It was s bit strong on the pepper taste, but the heat was perfect.
Oh, and they make wine! My wife even likes stopping here because of that, so it's a win-win. She says their barrel aged Pinot Noire is one of the best she has ever had.

The People: I haven't been enough to "know" the guys or be a regular, but the one time we got to sit at the front bar you would have thought we were there every week. Very friendly staff. Informative and excited about their products. Also gave great recommendations for local eating for us travelers.

They don't serve food but there were some chips and pretzels scattered around. The last time we stopped a couple had a pizza delivered to have with their beer.

All in all a great place!