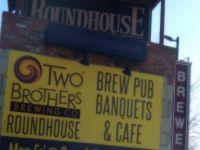 View: Place Reviews
Reviews: 15 | Ratings: 62 | Log in to view all ratings and sort
Reviews by StoutLover14:

I'm rating a dining experience. First off- great looking joint-rustic feel. Dark wood throughout. At least two band venues. Multiple patios with large stone fireplaces. A barista and a lounge. This place can hold a lot of peeps. Onto the dining experience.

Please note if your a manager here. Restaurant was a little less than half full for a late lunch. Our server was not attentive at all. We had five in our group. The menus were at the corner of our table the whole meal. No plates brought out for five different appetizers. The food runner guy had to take care of us. One of our friends just having iced tea needed to wave down the waiter for more. Asked for sugar- he forgot. Etc service not good at all. One server is not indicative of others-so I'm not rating as harsh. Maybe we just got the bum of the bunch.

As for the food. Burgers-good but not mouth watering. Calamari a big thumbs down-mushy. Wings more than likely reheated and hard. About the best was the fried pickles. Spinach salad-good but overloaded with red peppers and the blue chees was in hunks, could of been broken down finer. Not impressed with food overall.

Overall, I will come back but only for bands, beer and patios. Quality beers for sure and always better on tap.

Huge brewpub/eatery with great food and a large beer selection. Stop at the main entrance bar where they occasionally randall their fresh brews with hops. Plenty of to go beer available via growler or bottle.

As an Aficionado (my current BA title) and an urbanist (and someone who did not get along with his brother in a business venture), this brewpub was on my list for a long time. Plus, their original brewery later was built three miles from my childhood home.
Amazingly, I got everything tied together in one visit (well, not the sibling reconciliation... that was too complicated to do over a beer.)

First, why we are here: the beer. Over this century and perhaps 100 bottles, my general impression: good, sometimes very good, but not yet great. These 2 Bros built their business on two cash cows (Cane & Ebel, and Domain Dupage... for both, I like the brew along with the double meanings in the names.) I frequently try their other offerings and go back to a few... but more based on sentiment and support for local efforts than extraordinary quality.

This outing, I had a flight of four to get warmed-up and the DuPage biere de guarde with the meal. All good. All worth the price... well, maybe the dish was undistinguished. But, a Northwind stout with chocolate ice cream made up for the dish.

Stop right now, unless you want to hear about my urbanist side.
Retired from the headaches of developing mostly affordable housing, I now blog about central stations. (If you are interested, ask for the link to my series on Americans largest central stations.)
I'm also a transportation gadfly and wrote an article for changing how Chicagoland funds this. A former staffer from the key agency (also a blogger) emails me. He lives in nearby Naperville. We take the train here. And, we solve every cities' problems with beers !

The Two Bros are to be commended for this adaptive reuse and saving one of the oldest and largest 19th Century roundhouses. It adjoins the multi-modal Aurora Transportation Center. And if you take the train from Chicago, you will come to it through 30 miles of suburban sprawl. Aurora's downtown is mid-way through its revitalization. Among Chicago's several satellite rust-belted cities, Aurora's chances are best.

There is a lot wrapped up in this roundhouse. You will enjoy it.
Maybe now, I should bring my sibling.

Aurora is like the odd suburb where everyone is Mexican but there is a massive brewery complex in the middle of town. The Roundhouse is attached to the working train station and contains the restaurant, brewery,an event space, a second bar and what not.

9 regular taps and 2 seasonals at the main bar, and sadly the DIPA was sold out. Boring lineup, as expected from a boring brewery. But the food menu is cool (if not always well-executed), with a series of small plates including risotto, corn croquettes, bone marrow, vegan tacos and duck’n’grits).

Check out the separate casual café to the left as you enter the roundhouse- they have three taps with better brews than at the main bar (Smoked Black Tea, Imperial Stout, HopJuice, Berliner Weisse). Very expensive and widely unsatisfying, but still worth a trip.

Great atmosphere, great people, and great beer. I love two brothers. They have really good beer and there are always events going on at the roundhouse. If you ever in the aurora area Two Brothers is a must. It's historic and fun and the people are awesome.