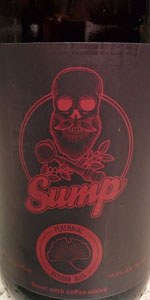 Jet black with thin mocha colored head that quickly fades to a modest crown. Creamed coffee aroma with fruity notes, and vanilla, chocolate and some slight bourbon behind. Big coffee flavor, dark with a little char, and chocolate and cherry in the aftertaste. Medium bodied with strong carbonation. Pretty solid, but not worth the prices it commands in Pennsylvania.

A: Good lord, this looks incredible. Pours black and sludgy with a monster three finger mocha colored head. You know that Sam Adams commercial where for Sam Adams where they're all "Look, guys, you can balance a bottlecap on the head of Boston Lager! Be impressed, dammit!" My cat could stand on the head of Sump and not fall in. It's like cake frosting. Suck that, Sam Adams.

S: So much coffee. It's like the last thing you would smell if you smell into a coffee roaster that was grinding up some amazing stuff. Before you ruined it, you bastard. Super dark, roasty and earthy. Burnt fudge, charred wood and espresso grounds.

T: My god this is good. So much beautiful dark roasted coffee and rich espresso, it's just silly. Maybe a hint of burnt caramel, tons of charred wood, there's a spiciness that almost hints at roasted chile a la Hunahpu. Full, creamy mouthfeel works perfectly with the flavors in here. One of the best non-BA stouts I've ever had.

A - could not ask for a more inviting look to a beer, pitch black beer with a big mocha head that leaves great lacing and does stick for a while.
S - huge coffee, creamy dark chocolate, almost a caramel wholesomeness to it, cream, vanilla, some roasts malts, some burnt marshmallow, just absolutely great
T - again big coffee, creamy dark chocolate, roasted malts, burnt marshmallow, slight hint of dark fruits
M - damn, so full bodied and heavy, but the alcohol is completely covered, aftertaste is creamy coffee and dark chocolate
O - damn near perfect, I'm guessing the barrel aged version of this causes instant premature ejaculation

On tap at a Whole Foods in Washington, DC.

The beer is black as coffee with a thin lacing that is a dark khaki-color. Lacing is sticky and well-distributed around the glass.

The aroma is delightfully similar to a sweet coffee drink. Sweet caramel and coffee hit initially, followed by cream and sugar. The coffee aroma is a deep dark roast.

Everything the nose set me up for continues with the taste. The beer is like sweet, creamy coffee with milk. There's some dark roasted malt and coffee presence, as well as sweeter malt. I get hints of oak and barrel-aging, although I don't believe I had the BA version.

This brew was exceptionally thick and creamy, only slightly boozy, and finishes dry and coffee-and dark chocolate-like.

I'd known nothing about this beer before trying it and was just blown away. It's a real treat to discover a new beer and find that it is awesome.

Best breakfast stout I've ever had. Full body with a taste of rich chocolate and coffee all day long. I was lucky enough to find a sixtel keg of this and it is currently on draft at mi casa. Cheers.

A-Poured into a stemless wine glass. Very black with an initial three finger mocha head. When settled, a thin tan lacing remained. The initial pour made me a little worried about over-carbonation but I was thankfully very wrong.

S-The first thing to hit my nose was the alcohol. Buried beneath are hints of coffee, vanilla extract, licorice and cocoa.

T-Poured initially around 40F and could not taste much. After letting this warm up the coffee really shines through. I am not sure what coffee was used but this is what I look for in a coffee forward beer, good coffee. Lots of coffee flavor of course, some caramel, milk chocolate.

F-Looks are deceiving on this one. It appears like it would be a thick, chewy beer however it is very smooth. The mild carbonation is perfect.

O-This is a pretty great beer but for the price I have many better options($16.99). I will seek this out again though as a once in a while beer.

T: Follows the nose, dark chocolate & caramel as well up front, some boozeyness as well. Coffee, dark chocolate, vanilla dryness & a little char as this warms. Vanilla, caramel, a little mocha & some dryness, the coffee takes a back seat to the other flavors in the finish, a little astringency shows up as well

A nice coffee forward imp stout, was expecting a little more, but damn good none the less. If you don't like them sweet, this may not be your thing

Getting around to reviewing Sump, having had it several times. Luckily, I finally took some reasonably detailed notes when I enjoyed the 2015 batch on tap at Beer Kitchen in Kansas City back on February 13th. Happy pre-Valentine's Day to my stomach! The beer was served in a small Belgian-style tulip glass.

Appearance (4.25) - Pours a decadent pitch black color on the body, with a finger of mocha-tan head resting atop for a few minutes before it fades away, morphing into a moderately thick ringlet of bubbles around the edges of the glass. I love the "line" where the body and head meet, as it isn't much of a line at all, with the foam seemingly fighting to avoid being consumed by the black hole of the body. Seriously, no light is getting through this beer. Lacing is essentially nonexistent, with just a spatter of residue intermittently along the sides of the glass.

Smell (4.5) - Big and bold, reminiscent of actual coffee, but with a suggestion of bittersweet character that reminds my nose that this is, in fact, beer. Aggressive aromas of espresso and baker's chocolate form the vanguard of the olfactory assault, but what really appeals to me is the suggestion of caramel and burnt sugar that sneaks in after the initial salvo. I'm a touch concerned that the hints of sweetness in the aroma are a precursor to a beer that is sweeter than I personally prefer in a coffee stout--even a big imperial take like Sump. Still, I could just sit here and smell this all day. The sweetness comes through more as the beer warms up to room temperature.

Taste (4.5) - It seems my concerns about sweetness are somewhat validated, although I should be careful to note that it in no way comes close to ruining the beer. I actually enjoy the caramel and molasses notes that seem to lurk beneath the surface of huge, black coffee grounds and brewed espresso that make up the primary character of this beer's taste. But I have to admit, my initial fear seems to be falling victim to the sheer decadence of this beer. The more I drink it, the more I think the sweetness really separates this beer from the pack.

Mouthfeel (4.25) - Full-bodied and viscous in a wonderful way. Carbonation is moderate to low, and is really just present enough to avoid this beer from feeling flat. It really takes a back seat to the almost syrupy consistency of the liquid.

Overall (4.5) - I have to say that my initial impression somewhat underrated this beer. Upon my first couple sips, I was thinking it was a 4, but as I took down my tasting notes and scored each component of the beer, my appreciation grew. Enjoying it as it warmed up to cellar temperature also helped enhance the beer. I'd definitely recommend it be consumed a little warmer than fridge/tap temperature.

A: Pours a calm, slick, pitch black color. Practically no head, even with a vigorous pour down the middle.

S: Fresh, roasted coffee, possibly a medium roast. Some chocolate notes in there as well. Also some hints of dark fruit, or chocolate-covered cherries.

T: Nice balance of coffee up front. Not super powerful or in your face, but that's okay. Bitter dark chocolates and a hint of vanilla in the finish.

M: Bordering on the line of being too thin or watery, but not quite there. Certainly not a big, thick mouthfeel. The 10.2% ABV is hidden very well, making this super drinkable. I'd also like a bit more carbonation here to help out with that mouthfeel.

O: Very nice example of the style here. Coffee is integrated well. It's not a super dark, bitter coffee that can sometimes give off a metallic taste, but rather a nice medium roast that works well. The base beer is also great, but maybe is hurt by being a touch thin and under carbonated. But still very smooth and drinkable this one is. I'd imagine the BA version of this to be outstanding, though.

Recommendation: Tricky to find outside of Missouri I'd imagine, but still highly recommend seeking this out if able. It's really, really good.

Deep pitch black body with a little brown head. Smells roasty but doesn't jump out of the glass. The body is definitely thin. There's a nice light roast with some fruity coffee tones. This isn't a coffee bomb and it isn't very rich. It just missed the mark for me based on 17 and Abraxas. Had it on draft.

750ML poured into a stone snifter.

Appears a very dark black oily substance with some sheen to it. Nice brown head. Smell is coffee overload, specifically mocha, some chocolate as it warmed. Taste follows the nose and adds hints of vanilla and some sweet cream. This is a great coffee stout and should be bought in cases if available!