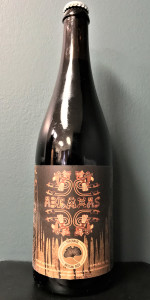 I recently tasted the 2019 Regular and Coffee Abraxas. Both were truly top-notched. So I am familiar with the base beer. My bottle of Vanilla Abraxas definitely seemed infected. Very strong pepper and vegetable flavors overwhelmed other flavors. I got very little vanilla (which was present in other variants). Other than the dark color, there was little notable about this bottle. It was drinkable...but I would not want another one like this. Hopefully my bottle was the exception.

750ml bottle thanks to Steve. Thick black pour with a skin of beige head. Cinnamon and coffee starrt the aroma, notes of chocolate, hint of vanilla. Taste follows with the breakfasty flavors, vanilla very faint. But you can't go wrong with Abraxas.

750ml bottle. No dating information found.
Black colored body. Light mocha brown head, starting at a finger in depth and then resting out as a thick cap. Leaves a few scattered spots of lacing.
Aroma is generally sweet from the vanilla. Dark roasted malts, cocoa and a touch of cinnamon. Just too sweet to pick up the chili peppers.
Taste expresses the dark roasted malts with a bit of char and anise. The main adjunct flavor is the sweet vanilla, but as this fades a little the cocoa pops up. The very end is saved with the coming out of the cinnamon and chili peppers. After taste is less sweet and more chocolate, cinnamon and chili peppers.
Mouth feel is medium. Some throat singing from the peppers. Good carbonation.
After recently having the Abraxas Coffee, I like this Vanilla version less. The vanilla pushes the beer into the sweet category, and only allows the spice and pepper to appear at the very end of the taste profile.

This is really tasty. Probably a one and done at the price point but still great.

Vanilla sweetness slight, heat on the finish, full mouthfeel without being too heavy.

Full disclosure I’m not a huge fan of Abraxas because I feel like the cinnamon is way too strong. I am a vanilla junkie though so this one hits me just right. Great beer!

I really enjoy regular Abraxas, and coffee Abraxas is one of my all-time favorites, so I was excited to finally try vanilla Abraxas.
Honestly I'm a bit disappointed. The vanilla is overly heavy and doesn't play nicely with the cinnamon, spice, and coffee flavors in the background.

gosh i have long wanted to try some of the variants of this fine fine beer, the base is among the best there is in this spiced stout category for my money, and the vanilla here really sets it off. the thing thats cool about this, well, one of the things, its all pretty cool, is that the vanilla doesnt add much sweetness to it. a lot of times with a vanilla forward stout like this, a ton of residual sugar enters the mix alongside it, and its a turn off more often than not, but thats not the case here at all, where the vanilla is rich and natural and up front in aroma and flavor, but it doesnt make the beer any more desserty, i think thats a great success, and perhaps a testament to the quality of the vanilla beans used. this is so luxurious, with the vanilla wrapping in all warmly around cinnamon and chili, light smoke, bitter cocoa, and the roasty dark malt keeping it from being too decadent, and adding a neat earthy bitter layer that i also appreciated in the original version of this beer. the proportions of things here are amazing, not too much of one element, and even with the enhanced vanilla experience here, its not at all too much, just sort of the leader of the pack instead of another dog. the smoothness here is incredible, no alcohol heat at all, yet its not so sticky and viscous that i dont want more than one of them. overall among the best i have had from perennial in any style, and really a leader of its field. this has me even more stoked to try the coffee one, i hope it too shows up in colorado! this was on tap at hops and pie, they get all the good stuff!

Even though, this is still Abraxas, the additional vanilla makes this almost a different beer. Still really good though. I'm a sucker for vanilla, so naturally I like it a lot. The cinnamon and peppers are pretty muted compared to the regular one.

Honestly just tastes like vanilla and chocolate with hints of cinnamon on the backend.

Pours black and thick. Smell is all peppers, then the cinnamon and finally a sweetness that is imperceptible, I guess it’s the cocoa and vanilla, but it’s not extremely different from regular

I actually like this variant of Abraxas (especially 2018) better than the heralded BA Abraxas. As far as a non-barrel aged adjunct stouts go, you won't find one better aside from maybe Shared Coconut Vibes. A must try.

2018 vintage. Released a month or two ago. The cap seems to be leaking very slightly.

A: Pours thick and black with a ring of thick, dark brown espresso-like head. Some dots of lacing and pretty good retention.

S: Cinnamon, rich coffee and dark chocolate, and a bit of vanilla (esp. as it warms).

O: Like all the Abraxas variants, this is good but basically tastes like the base beer. Maybe slightly better. The coffee is the star.

Pours super dark black with a deep tan head. Jammed packed with coffee as always with a surprisingly faint vanilla taste at the end but I get more cinnamon than vanilla. Super thick and delicious, highly recommend

The differences between this and Coffee Abraxas are that this a bit smoothed out and the vanilla seems to suppress the abundant cinnamon of Abraxas by a marginal amount. It's also a little sweeter, giving a sort of Vanilla Coke vibe, with a bit of a rooty woodiness.

I had this shortly after having Coffee Abraxas, which itself was underwhelming. This wasn't drastically different from that, unfortunately...so much so I could refer you, in large part, back to that review.

The coffee version was better, but not significantly different from regular, so I wouldn't be picky about which version you go after. This was my least favorite, though.

Poured into a teku glass via 750ml bottle

Jet black in color
Smell is strong cinnamon,slight vanilla and some coffee
Taste is about the same, cinnamon is more prevalent here than either the regular or coffee abraxas..vanilla is present but ..slightly disappointed by that as i love vanilla in my stouts and was hoping for more
That being said this is still a great beer, as i also get some sweet coffee roast in the taste
Carbination is also a little higher than the other abraxas beers and the body is pretty full , chewy and thick..glad i tried this one!

Deep black body with a brown head.
Lots of cinnamon on the nose, candi sugar? you can smell it's sweet. Vanilla isn't perceivable.
Medium sweetness, can't say more about the tasting, it's all messed up.
Very nice mouthfeel but I find this beer kind a mess, blinded I wouldn't noticed any vanilla in there.
Not my cup of tea and I love Imperial Stout.

Overall: a mess. Too many adjuncts in the kitchen. The vanilla overpowers rather than adding to the base, and it all ends up tasting somewhat abrasive. A surprising miss from Perennial.

M - Semi-dry to wet finish, very little warming on the way down for 10%.

Poured out as a deep black color with a brown head on top. The head dissolves for the most part and doesn't leave much lacing on the glass. The smell of the beer is pretty close to the original Abraxas, same spices and such. The taste has the spices as well but is a little less intense. I feel that the vanilla softens the potency of the spices here and it makes the beer a little more palatable. The feel of the beer is rich and smooth, coats the mouth nicely. Overall it's a great beer and really glad I had the opportunity to try it.

Poured from a 22oz bomber into a Perennial stemmed wine glass.

If you’re into spiced stouts, which I am, the aromas on this are out of this world. Heavy cinnamon and coffee, much more spice aromas than regular abraxas with vanilla added.

The taste is just as potent, complex, and spice-forward with a HUGE amount of flavor, dominated by cinnamon and milk chocolate, following through with vanilla beans, semisweet chocolate, and more spices. Roastyness sticks around on the tongue for a while. Mouthfeel is awesome, super thick with low carbonation.

This is basically coffee abraxas with less coffee flavor and more vanilla. I loved both, with the coffee variant having a slight edge over Vanilla only because it separated itself from regular abraxas more.

I honestly can't get much vanilla out of this variant, but WOW, what a spectacular stout irregardless. The chocolate and cinnamon are really in charge here. Mouth feel is incredible. Finish is long.