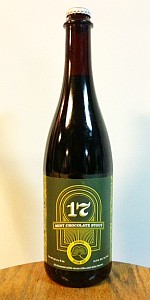 Notes: 17 is an Imperial Stout brewed with huge amounts of chocolate malts, cacao nibs, and mint leaves. This hearty stout boasts 10% ABV and big chocolate aromas and flavors with a hint of fresh mint. This beer is perfect for the last cold months of the winter.
View: Beers | Place Reviews
Reviews: 129 | Ratings: 806 | Log in to view all ratings and sort
Reviews by djgustafson:

A – Pours a deep, thick, and rich dark black. Dark coffee colored head appears, but disappears quite quickly. Moderate and spotty lacing is left behind.

O – Quite a disappointment as it really lacks any semblance of balance, extremely sweet and artificially minty, you could use this as mouthwash and hardly tell a difference if it wasn't for the color and opacity.

Good lord, who thought this was a good idea? Smells like someone dumped some peppermint extract into the beer prior to bottling. Overpowering everything - I can barely smell any chocolate or anything else - this smells way overdone. This is confirmed on the palate. Incredibly intense, grossly so, the mint is overpowering. I had to spit this out. Awful.

I love Thin Mints and Andes mints, but this is a little too much mint for me. Seems like the mint becomes more prominent as it warms also, so I would serve very cold. Look and mouthfeel are great though. And the chocolate is there, just overpowered. Still a very good stout.

Had this at Mikkeller bar in San Fran. Great nose if you like mint, mouthfeel is silky smooth and great taste. Not sure why this is not rated higher. I really enjoyed it!

A brave effort but the mint is overpowering making this beer almost undrinkable.

Great taste of mint, reminds me of drinking andes mints with alcohol but with toned down sweetness which is favorable to me.

Mint is great here, but you better like mint. Color is gorgeous dark, it's syrupy as heck. Very happy to have another bottle, and will seek out more.

A huge thank you to Jeffo, always surprising me with interesting things like this. Cheers bud!!

Smell. Dark chocolate and scope mouthwash. I wish my brain didn't associate that, but it did. I blame my buddy for saying earlier that he bough 4 bottle of mouthwash on the weekend. Who the fuck buys that much mouthwash, is he drinking the stuff?? Anyways, There's a touch of dark roasty malt coming through as well but the minty chocolate is cromulent

Mouthfeel. On the lower side of full bodied, low carbonation.

Overall. I was really excited to try this one but it just didn't play out as well as it could have. Always fun to try something different and this is no exception.

YORK Peppermint Pattie all the way. There's a touch of booze and roasted malt on the nose, but this aroma really takes the mint and chocolate combination from endzone to endzone.

A full to medium body features a fulfillingly soft, substantial froth and a semi-dry tang.

Some might find this a bit mouthwashy, but I think they really nailed what they were after here. It's a great beer to ring in the holiday season with some friends, but probably not the best bottle to sit down by yourself with, or have many multiples of, unless you're intensely in love with mint, especially in your stouts.

Though an experiment that's much more common in homebrew circles and lesser so on the commercial beer market, the infusion of mint and chocolate usually falls short with a glimmer of a hint here or a "use your imagine" taste there and leaving the curiosity unfulfilled. That doesn't happen here.

But before then, the Stout opens much like any well-made other. Its dark brown body might even be black, especially when considering its medium density haze. A large, loosely-knit head builds a mocha-stained lather on top the beer and recedes quickly until a stern swirl re-energizes it. Its light lace is spotty and pocketed as the beer starts to prefer a stiller appearance late.

And then the nose fills with both chocolate and mind, and for a moment makes you forget that you are drinking beer. But a quick rise of dark-roast coffee, light campfire, burnt toffee and a hint of sorghum brings the malty back. Light wood notes pull from the mint and introduce a more earthen hop character. Whisky-like alcohol scents seem lightly fruity and spicy to the nose.

And to taste, its the malty components that introduce to the taste buds first- roasted espresso-like maltiness with burnt toffee, caramel and molasses; and then a savory smoky chocolate taste seems cocoa-heavy at middle palate. An overlay of fresh-chopped spearmint is grassy, herbal and cool tasting. The marriage of the mint and chocolate is effortless as the taste of desserts come to mind much more easily than beer. But as the beer closes, I'm surprised at the amount of both hop and cocoa bitterness that weave together for an extended, robust aftertaste. Alcohol spices are woody, bourbony and a little of cherry and is the only interference with the hop and mint dominance.

Full bodied but not obsurdly so. Its medium-high carbonation gives the malts a lift as the alcohol and mint dry the middle and late palate. Even the hop and cocoa notes assist in keeping the beer semi-dry well into the next sip. A more savory texture would have really transformed this Stout into a dessert replacer.

Even though the Stout tries to hang onto its beery roots, it also offers up a sense of drinkability with its dryish tone and is sure to please the beer purists. But as hard as the mint and chocolate are pushed, I'd be happier to simply see the beer abandon anything beer-like and prefer a sweeter, more succulent and more savory taste and feel.

The in-your-face peppermint was too much for me.

Smells of mint and a little chocolatey.. Silky smooth.. Up front it does taste very much like the aforementioned Andes candies.. Some charred taste at the end but extremely enjoyable.. I like mint and really enjoyed this beer.. If you're not a mint fan be cool and leave it on the shelf for the rest of us.. Otherwise this is highly recommended for what it says on the label

This beer will clear your congestion with only a smell. Only for the mint lovers. Perfect mouth feel. Chocolate balances the strong mint. Phenomenal beer.

Clean, non artificial mint throughout the palate. Decent chocolate. Nothing over the top. Very nice.