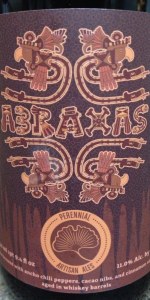 Reviewed by Rristow from Ohio

Okay. Fuck. The more I drink this the more I can barely finish the 9oz pour. Sugar cinnamon water. Cloying and WAY fucking 2 dimensional and cloying.

Reviewed by cdinardo21 from Pennsylvania

Reviewed by LunchMoney from Minnesota

Rated by Kapaopango from Spain

The beer pours fairly dark, blackish brown color with good head retention and considerable lacing. The beer certainly looks impressive enough. On the nose, I pick up vanilla, green chili peppers, some chocolate, underlying coffee and considerable whiskey. The flavor profile replicates the nose pretty closely, though I thought it a bit hot on the finish (something that is especially noticeable, given the chili flavor in this beer). That being said, the barrel aging seems to mute the base beer flavors in this beer somewhat, and really doesn't seem to blend in all that well. It does add another flavor component/dimension, which is always nice, but the whiskey flavor otherwise doesn't seem to bring a lot to the party in this beer. Mouthfeel is fairly full otherwise, and the alcohol seemed to be pretty well integrated into the flavor profile. Drinkability is pretty good, though it's hard to imagine drinking more than a small amount of this beer at a sitting.

This is a very nice beer, but given it's reputation, I confess I was expecting a bit more from it. Very glad I had the opportunity to try it, but this probably isn't a beer I'd want to seek out again.

Reviewed by Kdouble from Tennessee

4.98/5  rDev +5.3%
look: 5 | smell: 5 | taste: 5 | feel: 4.75 | overall: 5
Lucky enough to try this one at Xul Beer Company's first bottle share on Nov. 10, 2021.
Poured into an event glass.
Look- A deep black with a nice tan/brown head covering the top.
Smell- Nice chocolate and caramel mix with a hint of cinnamon. The barrel was present but not as strong as I expected.
Taste- Mostly followed the smell except the bourbon added a nice little kick to each sip. The molasses taste seemed more toward the middle of the pour.
Mouthfeel- Smooth with no carbonation. Not as thick and had nice lacing.
Overall- A first class stout with a great finish.

4.34/5  rDev -8.2%
look: 4.5 | smell: 4.25 | taste: 4.25 | feel: 4.5 | overall: 4.5
Pours very dark black with a thin tan head on top, Smells of Cinnamon Toast Crunch soaked in Bourbon which I think is pretty nice. The taste of the beer has the cinnamon and the touch of spice in there along with the vanilla and chocolate. The feel is nice and silky, doesn't burn the throat or mouth from the adjuncts which is perfect. Overall it's an outstanding beer and was fortunate to try it finally.
Sep 20, 2021
Abraxas - Barrel-Aged from Perennial Artisan Ales
Beer rating: 100 out of 100 with 1658 ratings