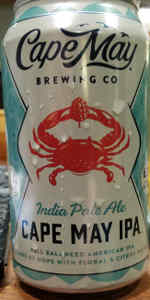 Notes: The American IPA named for America’s Oldest Seaside Resort, Cape May IPA is loaded with floral and citrus notes, slightly bitter with a zesty finish. A West Coast-style IPA brewed in the heart of the East Coast, it’s the beer that’s Crafted on the Cape.

On tap at Cabanas in Cape May. Reviewed from last nights notes.

A- very dark and cloudy for an IPA. This is really not what I expect in and IPA.

T- nice hop bitterness upfront, fades a little toward the finish, but ends as a refreshing malt/hop balance.

M- good texture, not too light, but not too heavy.

O- this IPA is good. I dont know if it is something I would go for all the time as it is a lighter, more muted IPA. That being said, it eorked perfevtly for me eating a crab topped burger while looking out onto the ocean. It really is a great beach/pool IPA. They should really can this stuff.

Sampling a cold growler poured into a mug. Thanks for the hookup to my brother Curt. I actually visited the brewery in their early days before the tasting room was functional and was worried about how they made it through hurricane damage.
This IPA proves that they are doing A OK.
the beer pours a slightly hazy copper hue with a brown eggshell creamy head of about 1.5 cm.
The aroma is citrus and rindy hops with a good caramel backbone to balance the beer.
The first sip reveals a fine tingly carbonation that tickles my palate as I sample this beer. The body is average and drinks very easy.
Flavor is some caramel and toffee up front and then rolls to a good dose of rindy and grapefruit pith hops. The hops dry out the finish and leave a lingering bitterness.
I dont get any booze on this one, and find the beer enjoyable and dont have much problem polishing off the growler.
Next family vacation I know where I am going for growler fills.

The clear dark amber colored beer pours out into a Duvel glass with a 3/4" off white head that recedes slowly to leave a ring of leggy lacing and sheets of lacing on the sides of the glass. The foam eventually becomes a large irregular island on the liquid and most of the lacing continues to cling to the sides of the glass. Sipping creates some arches, small patches and a few long skinny legs of lacing.

The aromas include lots of citrus (grapefruit zest) supported by some floral character and some bready malt almost concealed in the background.

The flavors are much as expected from the nose with the grapefruit zest and bitterness up front but backed up by some floral character. The bready malt sweetness is in the background but there is also enough of it to soften out the bitterness and keep it from rasping the tongue. But there's also an occasional almost unpleasant earthy touch to the bitterness.

The mouthfeel is medium bodied and almost smooth with some very light, prickly and persistent carbonation. The finish begins as the citric and floral bitterness fade a bit allowing the sweetness to come forward briefly before settling into a nice semi-dry ending that continues to have just a hint of sweetness to balance things out (unless it leaves that earthy bitterness showing).

This seems a well made IPA that I'd enjoy having again. That said, in a wide field of IPAs it doesn't set itself apart from the norm and the occasional earthy character to the bitterness seems jarring. But in many ways the beer is just fine in the sense that it provides what most breweries these days need, a well made drinkable IPA.