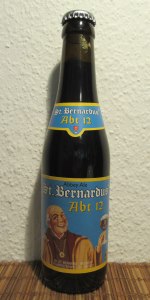 Notes: St. Bernardus Abt 12 is widely regarded as one of the best beers in the world. It is therefore no surprise that it is our brewery’s flagship beer, ranked at the very top of the St. Bernardus beer hierarchy. It is brewed in the classic quadrupel style and adheres to the original 1946 recipe.
View: More Beers | Place Reviews
Recent ratings and reviews. | Log in to view more ratings + sorting options.
4.5 by cold_beer on May 06, 2022
4.83 by Fedorable on May 03, 2022
4.63 by steevo24 from District of Columbia on Apr 25, 2022

Look: Pours a dark, murky brown with a lightly brownish/beige fluffy head that lasts quite long and leaves just a bit of lacing.

Overall: Prime example of the style. Very complex. Not too alcoholic despite its high ABV. Should be drank at the recommended temperature since it unfolds its full potential as it warms. Fantastic beer.

Poured from an 11.2oz bottle into a Boulevard Smokestack Stemmed Tulip

The beer pours a deep mahogany/brown color with about three fingers worth of fluffy head that slowly recedes leaving behind lots of chunky lacing.

Aroma pleasant, but a bit less robust than I expected. Bready with notes of raisins, plums, dates and a faint yeastiness that rounds out the beer.

Overall, this is quite a pleasant beer that I look forward to revisiting.

Yah this one’s legit. Was happy to find at Rock&Brews Orlando. Smooth and trippel notes but so much more. Lovely feel. Very balanced without being too malty or too hoppy.

Poured from a 75cL corked bottle into the biggest glass I have, a spieglau American wheat beer glass and It barely fit. A dark murky brown red letting almost no light through. On the pour I got a 2 finger head that started overflowing. After a little while it disappeared to nothing. Not all that carbonated looking.

Smell is very yeast forward with fruit notes and some alts coming through. Very similar to a dry wine with grainy notes very heavy smell. Some alcohol.

Flavor is quite similar to the nose but malts are much more present. Still some acidity and fruit notes mixing with the roast to make it a bit winey. Very dark and fruity beer at the same time. Some alcohol is detected but it seems to compliment the beer at warmer Temps (20 mine out the fridge). Very nuanced beer.

Feel is a bit thinner than I would've expected. I thought it would be thicker from all the grain that went into it. Buy its still very nice and almost easy to put down if it wasn't so big with the flavor.

Overall, its a very interesting beer with lots of flavors to explore. This beer is pretty extreme to the point of giving me wine vibes, but still at its core beer. This is my first experience with a real belgian ale other than an old bottle of duvel a long time ago so I don't know all that much about the style. However I enjoyed this beer

Some fluffy, beaten egg white foam forms over a deep copper, almost brown body. There's some sediment floating about, but not as much as anticipated considering I can't remember how long ago I purchased this bottle. Been meaning to pop the cork for awhile now. Smells super bready and yeasty, but not in the way you generally find typical of Belgians. This is its own thing, at least to my nostrils. Lots of sweet, dark fruit; figs and such. Also some fruity notes you wouldn't necessarily expect with raspberries standing out to me. Smells fookin' great. Tastes it as well. Not as good as implied by the nose, but very tasty all the same. Yeasty up front with a fruity middle and a bready finish. Nowhere near as boozy as I'd assumed with something of this octane. Low carbonation suits this beer very well. Complex yet easy drinking beer = big thumbs up from me.

T - taste follows scent with sweet bread and dark fruits. Some alcohol comes through at 10% ABV, but it’s more balanced and easy to drink than you would expect. The lightest of a floral hop bitterness in the taste. A little smoky/toasty cola comes through on some tastes as it warms up. Agitating it half way through brings back the sweet flavors. The complexity is great.

O - This is a great beer. Obviously at 10% ABV this is a one drink and done. But the scent and flavors are excellent. Nice complexity with each taste and smell. I really enjoyed the fact that agitating/swirling partway through brought back the initial flavor and scent profiles. All in all, even at the higher ABV, I drank this one pretty fast as I kept going back for different tastes. Highly recommended as I add this to my annual rotation.

The look is strong, aromas fairly decent, but the drink is where the beer is, as described, formidable. Tastes of sugared bread, dried fruits such as raisins and even dried candied melon and cherry. Powerful malt backbone that lasts for days

General alcohol warmth to the sip. Assertive mouthfeel with good carbonation. My beer hid the bitterness quite well, with the sweet malt notes winning every time. Might be due to this bottle being a little older (likely).

As it warms the beer opens up quite a bit. The malty, bready notes are even more prominent if that’s even possible. Once again that rum raisin alcohol warmness presents itself. What is harder to describe is the melding of multiple flavours and tastes that’s hard for me to pick out. I’d love to come back to this beer eventually.

Complex, and even more so as it warms. One of those beers that deserves a revisit every year. I wish I could give this a better review; I chose this beer as its strong as we just receive news Russia has invaded Ukraine. A beer, a moment in time, I don’t think I’ll ever forget and will likely become a home for me and my memories in the future.

Taste of biscuits and prunes. Quite sweet, although that tapers as it warms. Heavy, with some alcohol warming. Big mouthfeel, malt that lingers for days. Excellent balance for such robust flavors.

Overall: a triumphant beer that definitely stands out when you want a heavy beer but not a stout. It reminds me of old/stock ales but with less hops and bitterness. Tastes of raisin, rum, bread, and a slight pucker from prunes.

Great right ahead or right after the coldes of months, or when you need something to sip all night and a stout would be too much.

I do think there may be better quads, but as of yet I haven't found one that tops Abt 12.

Look: a dark mahogany brown that looks almost deep purple if not under light. Beautiful lacing with the a thick head that dissipates into a nice creamy top coating of bubbles.

Smell:right up in your nose, this one carries a pervasive aroma though it's not heavy. I catch the smell of Belgian yeast (sharp/sour) and it's lovely.

Taste: don't tackle this one when it's too cold, I enjoyed it after 40+ mins out of the fridge. Bold flavors that are balanced between raisins, prunes, rum, and dark bread. Loved that I can't taste any rock sugar, a common issue with me and high ABV Belgian beers.

Beautiful ruby/cola color poured with an off white head. Substantial and lingering. The smell is malty with hints of dark fruit. The first sip tells you a story. I am still new to tasting but even I can tell that this is exceptional. Sweet on the front end with dark raisin and toasted bread crust. Finished with a bitterness paired with a crisp clean bite. The mouthfeel is beautifully balanced with the carbonation. It’s a meal. I polished off a large pint +9oz bottle tonight in short intervals. I wish that o could fully appreciate everything that was going on with this and plan to revisit again in the future as my beer palate matures. Top notch beer and deserving of a world class title.

I'm not traditionally much of a Belgian beer drinker, and at $22 a 4 pack I was skeptical on the recommendation, however I must say that I am impressed the dark ruby and brown color and off white head lead to an aroma of wine and dried fruit on the nose, particularly red wine and cherry. On the taste it feels exactly that like that with a more pronounced flavor of sweet raisins rather than dry wine, which leads to a funky Belgian ale finish which is just intrigued. I'm just blown away at the complexity of this beer and the warmer it gets the more interesting it becomes, it is truly a unique experiance and I Highly recommend trying it once in your lifetime. Prost.

Actually first time to have this legendary beer. Draft in a goblet. Dark brown and hazy great lacing. Rich, toasty, malty, molasses, and rich smell. Sweet and funky taste. Belgian yeasts are obvious. I love the mouth feel; velvety. Dried fruit and a noticeable but appreciated slightly bitter finish. After enjoying Abbot 12 I can fully appreciate its lofty status.

Poured into a Goblet from a fairly fresh bottle, at around 9° Celsius.
Mahogany colour, with light leather notes when seen in direct light. Nice foamy head, creamy colour, not very persistent but consistently present, if faint. Somewhat lacking smell with hints of floral characteristics, and that usual smell of Belgian yeast... but in the mouth? Oh dear... so many things to take notes of, the intensity is out of this world! Raisins, plums, strawberry and cherry, it's an explosion of dark fruits, with strong hints of chocolate and lighter ones of coffee dominating a somewhat bitter aftertaste. It's just... so balanced, and extremely drinkable, as the high alcohol content makes itself known only in the aftertaste, enriching the bitterness. Near perfect!

T: follows the nose from start to finish - raspberry is slightly dominant; mild bitterness at the end;

I bought it in a mixed pack iat LCBO in Ontario.
Abt 12 at 10%.
Poured a 2finger creamy head .
Dark color smooth flavors dark fruits toffee or chocolate.
Alcohol is hidden. Until you are half way through it or towards the end you can feel the alcohol more .
Leaving a lace as you drink it .
It's very enjoyable beer to drink sipping on it.
Overall very nice beer again from Belgium.
Cheers.

750 ml bottle poured into a goblet

A- A clear brown with red highlights and small tan head.

O- An excellent Quad and easy to drink. Flavors are well balanced

Overall: Very strong Abbey quad ale. Complex aromas & flavors. Don't drink too cold or you'll miss some nuances. Seems a tad more bitter than some of St. Bernardus' other brews, but the malt base & alcohol appropriately balance it. Alcohol is noticeable, but amazingly well hidden. Has the signature highly effervescent carbonation from the bottle conditioning. Very nice.