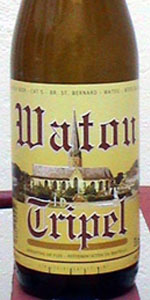 Solid orange golden color with a thick head with good retention.
Aroma with notes of candied fruit, orange marmalade, a bit of cloves, yeast and honey.
Flavor with notes of oranges, candied fruits, cloves, mild green apple, a bit of banana, pepper and yeast. Dry aftertaste with a mild to medium bitterness.
Bordering medium body with somewhat effervescent carbonation. Great example how to dangerously hide alcohol.
Flavorful and balanced Tripel with the citrusy and spicy notes.

11.2oz bottle bb 02 03 19 poured into a St. Bernardus goblet at just above fridge temp 7.5% ABV. The beer pours slightly hazy orange amber in color with off white head. The head fades quickly leaving a thin cap and some lacing. The aroma is mostly clove and pepper with a touch of bubblegum. The taste is semisweet pale malt accented with strong black pepper and clove leading to a mild, but firm, closing bitterness. The mouthfeel is medium bodied with above average carbonation and a mostly dry finish. Overall, very good. I'm not a huge tripel fan, but I like the balance and spice here. No banana which is normally what I dislike.

One of the better triples I've had

Pours hazy gold with active carbonation and two for ne'er head the retains throughout
Smell is bready with slight clove scent
Taste is somewhat bitter spice on the backend with a banana and clove taste up front
Feel is soft carbonation that really activates the subtle flavors
Over all this is a well done triple that will make you consider joining a Monistary! Hats of to the brothers!

F - Stinging carbonation and a slight astringency on the tongue.

Nicely complex, not too many spice notes, juicy and refreshing.

Really nice tripel. Great mouthfeel with a nice carbonation. This beer is quite dry and fruity as hell. Mostly orchard fruits esters are present and the balance is good. Once again a great beer from st bernardus

This beer pours a clear yellow with a large head. The aroma offers up apricot, tart lemon, clove, nutmeg, and cinnamon. The flavor has notes of banana and apricot at first, followed by nutmeg, clove, and cinnamon with a good dose of sweetness. The mouthfeel is medium bodied with a touch of heavy sweetness. Overall this is not as complex as other examples of this style, but is more easy drinking for it.

330ml bottle served in a tulip at room temperature.

Very little spice for a tripel. Subdued fruit. I'm picking up some ripe peach and apricot as well as citrus. Not much sweetness or booze in this well-aged (close to a year) bottle, but I do get a nice hit of boozy warmth on the finish.

Yet another solid old-school Belgian tripel. This is an old bottle I'd sort of forgotten about, and it seems to have benefitted from the ageing process. None of the sharp edges you sometimes get from a tripel are manifested here. Recommended. I'll try to pick up a fresher bottle for contrast.

T/F: Pretty straightforward tripel... yeasty and malty with notes of citrus and fruit. Cloves and faint peppercorn. Honeyed sugars and slightly acidic. Feel is light and crisp. Finish is clean.

O: Not a bad tripel, but from St. Bernardus I was expecting superior... and this one didn't quite make it.

St. Bernardus’ Website:
Watou Tripel is a traditional abbey ale brewed in the classic "Triple" style of Belgium's Trappist Monks. This golden pale ale is mellow-sweet with lightly perfumed aromas and some spicy yeast notes. Rich and fruity with a soft mouth feel.

Taste: Aroma carries over to the palate. With the grassy notes, then some spices in the middle - coriander, clove - then a malty finish which leaves behind a slight bitter orange taste. Alcohol is very well hidden.

Mouthfeel: Medium bodied - light for the style. Smooth on the plate and a little drying in the finish. 4.25

Overall: Very nice, as one would expect from this legendary brewery. This is a lot more understated than the other Tripel from St. Bernardus, which personally I prefer. This one still is a solid, very drinkable ale in its own right though. Apparently it was created for the French market but is now available on both sides of the boarder, as well as in many other countries.

Poured from a 11.2 OZ bottle into a tulip glass. The appearance is a golden cloudy color with heavy unfiltered sediment. The aroma is big on citrus. The taste is citrus and acidic.

The pour is an attractive looking pale yellow with a lingering, soft and delicate white puffy head.

Like the aroma the taste brings out a pleasant toasted sweetness in the Belgian malts, orange, lemon, and other fruity notes, spice, and a sweet low hop bitterness to finish. Extremely well balanced and easy to drink. I am stunned that I have never reviewed this one until now because I know I have had it before.

I should have let this one settle longer, it foamed right out of the bottle when I opened it. It is a nice copper color with a large off white head. Lot of carbonation, make sure it has rested a day or two before opening.

One of the stronger smelling examples of the style I have come across. Very fruity, apple, pear, and citrus notes. Quite a bit of yeast in there, giving the smell a bread like character.

Like the smell, a lot of fruit in the taste. There's apple and pear, also some sweetness like honey. Has a nice spiciness on the back.

Fairly thick and smooth going down, one of the thicker examples of the style.

I think my biggest complaint with this one is not buying more of it. It is a little different than the usual triple in that it has fewer citrus notes than I expect, but that makes it somewhat unique. It goes down easy, very drinkable for the strength, and has plenty of flavor. Worth a try.

Bug fluffy whit head that retained a few kilometers for quite a while. Beer is golden brown with a large amount of sediment (that I mostly kept in the bottle with a slow pour). Nevertheless some cloudiness still got into the glass. Steel mineral on the nose with sweet oats and yeast wheat bread. The sweetness continues into the taste with wheat bread and biscuit again but with a rich brown sugar, agave and molasses. A tangy earthy dried leaf continues through the midsection with a rich cedar bark note and a touch of sand. A prickly epervesent tingly bite finishes with a fruity pear and prune note. The finish is excellent. The prickly tangy finish wonderfully balances the sweetness and earthyness. The beer leaves a mildly dry and medium salty finish. Overall, quite delicious. As a whole it delivers a lot of flavor in a balanced package.

Watou Tripel pours a golden color with a big lacing head. There is big dark spicy aroma. The taste is yeasty with a smokey spicy flavor that leaves a weird bitterns. Flat body. Overall, strange spice notes, not for me.

Another spectacular tripel from Belgium. Pours with mile high pillowy head, spicy aroma and spicy/bitter taste. One of my favorite styles, and a another winner from Belgium.

Golden brown and slightly hazy. Smells yeasty like an old pub, which I suppose is how a Belgian should smell :-) the taste is well balanced and complex, sweet with the distinct alcohol flavor of a 7.5 ABV. Belgians aren't really my thing, but I find this one pretty agreeable. Would drink again.

A- Pours a hazy apricot colour topped by a fizzy 2 1/2 finger white head. Lots of lacing.

S- Faint aromas of pear, apple, spicy cloves, and yeast. If one didn't know it was a Belgian before sniffing this brew, chances are they know afterward.

T-Apple, Pear, a little bit of cloves, and a lot of yeast. Refreshing Tripel.

O- One of the best Tripels I've had to date. It's no Fin du Monde but it doesn't lag far behind! At 7.5% ABV, it's one of the lower alcohol Tripels I've seen so if you're looking for that Tripel flavour without the 8%+ ABV, give this one a try.

Appearance: It has a nice hazy golden/orange color to it with a fair amount of sediment. It has a nice thick white head that dies down slowly and leaves some lacing.

Smell: The aromas definitely give out hints of Belgian yeast, apples, pears, some breadiness, pepper and faint cloves.

Taste: Like the aromas, it has Belgian yeast upfront, apples, pears, pepper, cloves and some bready undertones.

Mouthfeel: It has a high carbonation with a nice overall balance and feel.

Drinkability: It's a very smooth drinkable beer accompanied by good flavors and aromas.

Watou Tripel from Brouwerij St. Bernardus NV
Beer rating: 90 out of 100 with 594 ratings