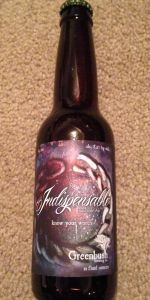 I picked up a bottle of Greenbush's Indispensable yesterday at The Lager Mill. I'm in the mood for something hoppy tonight and I thought I would give this beer a shot, so lets see how it goes. Bottled on 2-28-15 so it's less than a week old. Poured from a brown 12oz bottle into a snifter.

A- The label looks nice, it's got a nice design to it and it's a little eye catching. It poured a murky dark orange color that took on more of an amber orange color when held to the light with a little over two fingers worth of creamy and bubbly light tan head that died down to a thin ring that stayed till the end and it left just a little bit of patchy lacing behind. This is a pretty nice looking beer, but i wish it wasn't so murky looking.

S- The aroma starts off with a higher amount of medium sweetness with the hops being the first to show up and it's the citrus and tropical fruit hop aromas that stick out the most with some nice pineapple orange juice aromas coming through and there were some floral and green hops showing up in the background. Up next comes a slightly alcohol aroma with a little bit of doughy yeast showing up and it's followed by some some sweet malts with some light toasted malt and bready aromas coming through. This beer had a very nice aroma, I liked the fruity hop profile.

T- The taste seems to be similar to the aroma, but lighter and it starts off with a slightly higher amount of medium sweetness with the hops being the first to show up and they impart the same hoppy aspects that they did in the aroma, but this they are lighter with the fruity hops being not as dominating as they were in the aroma. Up next comes a light alcohol flavors and it's followed by a little bit of doughy yeast with the malts imparting the same aspects that they did in the aroma. On the finish there's a medium amount of bitterness with a quick and slightly watery hoppy aftertaste. This was a pretty nice tasting beer, but I wish the finish was a little better.

M- Smooth, crisp, the alcohol could have been hidden just a little better, medium bodied with a medium amount of carbonation. This beer had a pretty nice mouthfeel that worked well with it.

Overall I thought this was a pretty nice beer and I thought it was a good example of an IPA, but with the stronger ABV I think it's right on the border of being a DIPA and I think it could easily be passed off as one. This beer had a nice drinkability, it was smooth, crisp, the alcohol could have been hidden just a little better, not too filling and the taste did a nice job at holding my attention, I could drink a couple, but the finish might start to wear on me after that. What I like the most about this beer was the aroma, it was by far the best aspect of this beer. What I like the least about this beer was the finish and that the hop profile in the taste isn't more like it is in the aroma. I would buy this beer again, but it isn't something I'm going to stock up on. I would recommend giving it a try, especially if you like DIPAs. All in all I like this beer, i think there's some room for improvement, but I still liked and I thought the hop profile has some good potential. It isn't a favorite Greenbush beer and it's a little above average for the style. Nice job guys, I liked this IPA, keep it up.

Pours a dark copper color, is slightly cloudy, and has an weirdly uneven head. You're smacked in the face with piney hoppy aromas. Not much flavor here, because the hops are so overpowering. Goes down extremely bitter, but does not have the common lingering hoppiness that's expected. The bottle says IPA as does this page, but this is obviously an Imperial IPA, so I rated as such. Overall this is a decent brew.

S- Quite bold and hoppy. Lots of grapefruit and tropical fruits, like a pineapple-mellon combination. Sweet malts underscore the hoppy aroma.

M- medium-full body. Quite dry with a hoppy bite.

O- A nicely balanced, bold IPA that straddles the line toward a double-IPA. Good for a bottle or two in a sitting, it could really go to your head if you tried to do much more on an empty stomach.

On tap at the brewery served in a pint glass.

Look- A dark and slightly cloudy amber/gold with with a creamy finger of white foam. Heavy lacing is left behind as it slowly settles.

Feel- Creamy and slick with a bitter and semi dry finish.

Overall- I'm a fan of Greenbush, but their IPA's do nothing for me. With that said, this is one I can actually tolerate. The smell is a bit funky, but everything else about it is decent enough. Easy drinking for the abv. and worth trying at the bar.

Purchased 12 ounce bottle from Crockers in Niles, Michigan for $2.50 in March 2016. This IPA showed 8.2% alcohol by volume with 84 IBUs. Loved the dry taste and it was very refreshing. A wonderful summer IPA with high alcohol content. I definitely recommend this one.

Pours a golden orange, hazy, with a one finger foamy head and some soapy lacing. Smell is lots of citrus- orange, grapefruit, malt, kind of a spicy aroma- clove? Taste follows the nose on the citrus, with a big orange burst. Grapefruit, light malt, a general spiciness. Solid bitterness throughout. Smooth, good body, appropriate level of carbonation.

Really liked the Mandarina hops in this, lots of good orange. Very enjoyable to drink, refreshing. Solid effort, worth stopping at Greenbush for a few bottles.

Indispensable from Greenbush Brewing Company
Beer rating: 87 out of 100 with 78 ratings