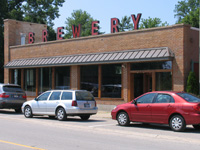 Greenbush is a favorite stop, but be prepared to wait. Even with the annex open, don't think you'll be stopping on the drive from or to Chicago and getting a quick bite. Especially in the winter. And like any busy restaurant, you could swear they're chronically understaffed. That said, it's highly recommended.

It is the best brewery and bar in a environment of great beer. A must stop for beer but beware it gets very crowded because popularity has been established. Bar atmosphere on one side of street and annex aka outside patio is on other side of street. #1 in sw Michigan

The place was incredibly busy, but be warned, this is treated as a "family" destination, so people are here with young children for lunch. The tap room has a large bar and walls completely lined with 1/2 liter glasses (beer club? nearly 800 mugs seems optimistic). Service was very attentive. Beer selection is limited to about a dozen beers, plenty for a couple of tasting flights.

Greenbush is a necessary stop on any SW Michigan brewery tour. It's in a great location, not far off the interstate. I dare say the food may actually be better than the beer. They sport some of the best BBQ in the area. The portion sizes are generous and prices seem reasonable. Beers are decent but nothing stands out. Service has been hit-or-miss but nothing so bad that it would keep us from coming back. On both our recent visits, the dining area seemed full of locals, including many just there for the food, which we consider a good thing.

The predictions from 2011 about this place making it are proving true. From a near-dive bar when I visited in 2012 to 2017, Greenbush has taken off. They expanded and upgraded the bar, opened up another across the street and it has a nice beer garden. They have probably tripled their capacity for production and people. (I have a theory that crafters grow faster in tourist destinations, but save that for later.)

I went on October 1 to get a flight at noon. On the side of the street with the beer garden, the line had twenty people ahead of me and not that many chairs. I took the easy route and bought some bottles to see if the wisdom of the years was setting in. A good porter, but the other two were below grade... particularly the Belgian which, admittedly, I get snooty about.

Locals tell me the place is usually packed during the season, and often in the off-season. While I don't have a particular thirst for the hoppy beers Greenbush produces best, apparently a lot of people have that thirst.

Fantastic place with amazing vibe. Great selection of their own brews on tap and really nice meat and cheese platters and a few other dishes. You will get full, but don't expect a huge variety of meals. Still, the meats are really nice and the platters are great for sharing.

Loved the vibe, beer quality has always been inconsistent in bottle but draft was excellent. Excellent service and awesome taplist. Make sure and visit annex across the street from taproom, where you can also drink and fulfill all your charcuterie needs.