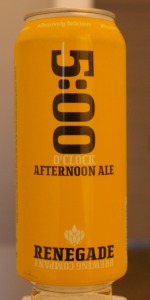 Poured into a DFH glass a pretty nice clean/clear golden yellow color, with some pretty nice carbonation, and with a one-finger plus white head, which leaves some nice creamy sticky lacing behind. The nose is malty, hoppy, with a little citrus. The taste is pretty nice, malty, hoppy, citrusy. Medium body, ABV hidden nicely. Overall a pretty tasty brew, a nice thirst quencher.

I had a newer cousin of this brew recently - one with lemongrass and ginger added but that presumably is this brew as a base (my assumption). Those spices really worked, and lacking them, this is not nearly as satisfying.

It opens with great head and foam - truly outstanding. That foam sticks around a long time. The aroma is typical, clean and fresh and not overburdened with hops or anything else, just a tad of yeast smell.

The taste is fresh and clean. I guessed blonde ale and then checked, so they seem right on the style.

Overall, this is pretty decent, and I like the sentiment of the name - start easy! Recommended for when you don't want to get wasted. Yet.

Attractive golden brew with plenty of foam in the chalice. Not much perceptible aroma. Fairly crisp and well-carbonated in the mouth, best features. Extremely light body.

There's a hint of Kölsch taste but then it tapers into a plain and dirty finish. Slightly astringent aftertaste but no trace of hops. Metallic note. From the 12 oz can in the Colorado mixed 12-pack purchased at Grapevine Liquors.

Should not be rated as a Blonde Ale, as the brewery counts it as a Kolsch.

Anyways, 5 o'clock pours a lightly hazy golden hay color, with a head that looks like it's going to fizzle out but it doesn't. It's very loosely knit and looks carbonated like a soda, but leaves impressive lace on the sides and keeps its head a good while. 40% opacity.

Flavor is sharp and bitter to start, but quickly fades to a honey-like sweetness and carrot cake finish. Lingering bitterness buzzes on the palate as the tug of war between sweet and bitter comes to an end.

Feel is light, crispy, and a touch aggressive in its sharpness/carbonation. A bit of pastiness finishes the feel.

Overall, not an impressive ale...I like the carrot cake aspect, but this beer can't decide if it wants to be a sweet Kolsch or a bitter one, instead turning out like carrot cake baked with dandilions and grass clippings. It gets tiring after half a can, which is not good at all, I may end up pouring the rest out. I suppose if you're sweating in the hot sun and need something to cool you down, this would work - but so would any other lighter styled beer on the shelf.

I liked this beer on first impression. Light easy but not watery tasting. I say great

Pours a clear, gold color. 1/4 inch head of an off-white color. Decent retention and decent lacing. Smells of citrus (orange), slight hops, hint of tea, pale malt, and slight spice. Fits the style of an American Blonde Ale. Mouth feel is sharp and crisp, with an average carbonation level. Tastes of slight earthy malt, slight wheat, spice, pale malt, hops, hint of tea, and orange. Overall, enh the earthy malt and tea are too strong, but the citrus is a nice addition.

This one was decent, but I was hoping for some more flavor. I guess it's a session beer more than anything. A recurring problem I've had with this brewery is that they tend to mis-classify their beers. I'd call this a very light session ale, not so much a golden. Tasted a bit watered down to me. Still looking for that Renegade beer that really deserves their reputation.

Sampled also last night on 9/11/15. Comes in a 12-ounce can. Can chilled down to 36 degrees F in my beer cooler and poured in to a vintage "Michelob Fine Ales" pilsner glass.

Brew pours a clear golden-yellow in color with close to a 1-finger foamy white head. Some spotty lacing was seen when sipped. Aroma is of grains with some floral hops and maybe a hint of spice. Pretty much can be said for the taste with a hint of probably lemon zest. Slightly hoppy and dry finish. Just on the lighter-side of medium bodied with good carbonation. Overall it was OK as I am not a big fan of this brew style.

The beer comes in a clear golden color.

The beer is quite mild. Pale malt, some bready sweetness throughout, a metallic finish, in general a watery brew.

Afternoon Ale seems like an apt title. It's crisp and bright with mild toasty malt and spicy hops flavors. This beer leans toward the bitterness, and there's a mild yeasty and fruity element to it. It reminds me more of a kolsch or keller pils than your average blonde. Fun beer. Have another.

Aroma: This style, and more to the point -- this beer smells like wet breakfast cereal. There's a wet cardboard aroma in there with a touch of sweetness that may or may not remind me of honey.

Taste: Sweet and malty up front, and with a cereal grain thing about it. The hops seem to kick in here, whereas in the aroma not so much. The finish is slightly grassy and balances out the malty sweet beginning.

Mouthfeel: Medium to light in body. Goes down pretty easy.

Overall: Not outstanding, not bad. Easy to drink. They should have added some citrus zest and made it a summer ale, and it would have received a better rating from me. Otherwise pretty forgettable.