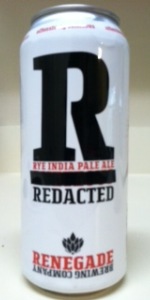 A: Hazy copper/bronze body. Hardly any head, even with a vigorous pour. Not a good sign.

S: Lots of rye malt, not much for hops.

T: I want more hops. Some nice rye flavor though.

M: Where is the carbonation? Horrible. Has the same mouthfeel as Newcastle Brown Ale. Disgusting.

O: Come on, Renegade. This cannot be your vision for this beer. Your Elevation was so good, but this is either a bad batch or just a bad beer.

Poured into an Irish pint glass.

Look: A hazy thick sunburnt caramel colored body holds up light cream colored head. The head recedes to a patch of bubbles, some wisp, and leaves nice lines of lacing on the glass.

Taste: It starts out very dry and ends very dry, but in the middle there is some faint caramel sweetness and a touch of citrus.

Overall: This is a very tasty beer. It's a bit on the dry side, but has enough in it to offset that and make it very enjoyable to drink. Watch out, that 7% ABV will sneak up on ya.

APPEARANCE: The Ryeteous pours a nice, pleasant orange color with a half-inch, nearly white head that slipped away rather quickly. A wispy cap creates a ring around the edge of the glass and then most of the middle of it, leaving a mote-like void around the outer portions of the glass. There is a slight haze left once the chill is gone and the lacing…

SMELL: This has got a great nose. Some nice rye aroma provides a backbone for the big, fresh, and floral hops and the sweet caramel malts. There also seems to be a touch of honey in the nose here. Yep, it looks like a DIPA and it smells a little like one too.

TASTE: The most noticeable aspect of this beer right off the bat is that the sweet malts of the nose do not translate into the taste. The hops are strong and bitter with an earthy and grassy flavor. The rye malt seems to keep this one steady throughout the sip, but a touch of citrus comes through on the back end - mostly grapefruit with maybe a hint of lemon.

MOUTHFEEL: The light carbonation goes a fairly long way in terms of sparkle and the body is pretty light for an IPA. A nice tingle remains on the palate after each sip.

OVERALL: This is a pretty good effort and my first impression of Renegade is pretty solid. This seems like a great Boulder house-party beer – a nice, solid IPA at a reasonable price and in a can.

Got this from a buddy who lives in Denver. Interesting looking can from a brewery I haven't heard of despite going to Denver the last three years for GABF. Always good to find something new.

Poured into a pint glass, it is pretty cloudy. Not too bad. It doesn't foam up too much, in fact, I almost thought it may be a little flat, at first. I've had cans that made the trip from CO before do that. The head that settles in is thin, but doesn't disappear. It gives me nice layer of a creamy film over a cloudy, golden beer.

Woe, that's way more bitter than I was picking up in the nose. It's an interesting mixture of flavoring and bittering hops. The bitter must be the Rye, but it's not as malty-sweet as I normally think of when I have Rye beer. It's like they upped the bitter hops to match the Rye (?) The citrusy-sweet flavoring hops could be a little stronger to balance that out, but I imagine they were going for something a little different, here.

Very full bodied. Not flat at all, like I initially feared. The bitterness and hoppy aroma seem to really fill this beer out.

Overall, a decent take on a Rye IPA. Not amazing, but different.

Pours a hazy caramel with ~1 thumbs width off white head, that somewhat quickly vanishes. Nice lacing. A sweet, fruity aroma with a hint of some rye bread in there. Perhaps its a touch too subdued, but I really enjoy it. Taste offers some orange, pine, rye, and bread. Flavor definitely improves as it warms up a little, though once it hits ~room temperature its way too much where some of the plastic referenced below can show itself on an occasional sip. Got some bitterness to this thing, probably a moderate amount. Mouthfeel is thin but I actually like it, I find it makes the drinkability of this much greater. Overall, a nice intro for me to Renegade.

Faintly orange-amber in color, with a white head. Citrus seemed to dominate the nose, mostly oranges, joined by pine as well. Slightly earthy from the rye and malty on the nose, with more of this on the dry palate.

Redacted IPA from Renegade Brewing Company
Beer rating: 86 out of 100 with 171 ratings