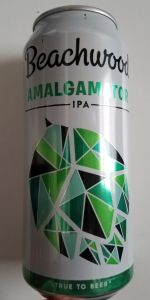 Amalgamator pours a only slightly hazy golden color with a nice head and fabulous aroma. The taste follows the nose and is light in body but bursts with hop flavors and a hint of dank. Great mouthfeel and overall an excellent West Coast Style IPA that doesn't finish too dry or bitter. Thanks for sharing @RaulMondesi . Canned 05/09/22

Pours honey gold, translucent with a finger of white suds. Quickly reduces to a ring and leaves spotty lacing. Nose is pine, citrus, dank, and somewhat herbal. Taste follows suit with a bitter pine up front and everything else following suit. Feel crisp and sharp with a good bite. I enjoyed it.

Very earthy and minerally aroma, with hints of grapefruit.

The flavor is iced tea with grapefruit and lemon pith, clover honey, a bit of pink grapefruit juice, mineral water, and a metallic bitter finish. Crisp and dry.

Good, but not quite as good as I'd hoped. I would like to try it fresher, though.

Taking the world of West Coast IPA from pinesol to fruit cocktail, Beachwood Brewing uses a cast of old and new hops to give the substyle of IPA a bright and cheery update.

Amalgamator pours lemony gold and with a frothy stark white head. As a bold array of fruit and herb rolls onto the senses, the nose is awaken with citrus, green fruit, tropical fruit and a host of exotic greenery. With the gentle grain sweetness of honey, faint caramel and wafer, the initial taste is sweet, bready and light.

But the hops spring to life on the middle palate when the Mosaic and Amarillo hops share flavors of tangerine, pink grapefruit, lime, passionfruit and pineapple. An eventual taste of blackcurrant leads the way into a more peppery and resinous late taste of spruce, citrus peels, dank grassiness, peppery herbs and sticky, sappy bitterness from Warrior and Columbus hop varieties.

Medium bodied and trending dry and refreshing on the palate, the beer finishes bitter and resinous with bold fruit aspects heading into a long extension of stem, spruce, hemp and tropical rinds.

Pours copper in color from can with white head. Nose is piney but not overpowering. Taste is citrus all the way with a very dry finish. Superb beer as expected

Look: Pours a deep yellowy-orange with a nice thick head.
Smell: Has a a pleasant aroma.
Taste: Not overly hoppy, but a good blend of citrus and pine flavors. Perhaps not as fruity as other mosaics.
Feel: Good carbonation with an easy finish that tapers off nicely.
Overall: A solid west coast IPA

One of my favorite flagship IPAs, now apparently available in Chicago, to my great delight! Great showcase for Mosaic hops, with some stonefruit and blueberry influence but still a thoroughly West coast style IPA--lots of dank resin and more bitterness on the flavor profile than expected from the 70 IBUs.

Poured from a 1 pint can. Canned on 03/20/2020 70 IBU's
A classic California West Coast style IPA.
lots of tropical fruit notes, nice a dank with a good bitter finish.

Pours a crystal clear golden blond. Generous foam. Mosaic notes are present on the nose, with some melon and berries mixed with tangerine citrus. Smooth, almost creamy. It’s west coast only in appearance, but it doesn’t veer into juicy territory, either. Delicious.


Previously: West coast IPA in appearance, as welcome as an old friend.
I get a gentle mosaic-influenced blueberry note, along with some piney resin. The beer tastes just shy of sweet, with enough pith to hit just the right spot. Delicious and easily drinkable. I like it.

DANK GOODNESS! - being local helps, and I now know why some of these reviews aren't great. If it's not fresh, it seems to decline rather quickly.

Crack the can, smell the dankness. This is hands down my favorite IPA right now. They did a double gator (double ipa) version that I thought would be even better, but honestly, not really. I think the OG Amalgy is a home run magic potion type beer.

I prefer to pour into a 16 oz tulip (aka double ipa style) - not that it makes much difference, I just like it that way.

Pur is deep gold, a PRETTY beer with a 1" head. Great lacing.
The smell is absolutely insane, full-bodied, fruity, piney, citrus dank goodness.
Taste: HOP MAGIC - Dudes, I love this blend - it's got that upfront hop bite, but such a smooth yummy flavorful mid and absolutely smooth, pleasing malty finish. It's perfect really.
Feel: I'll put it this way... I can drink one after work... Or, I can get absolutely faced on these bad boys. It's a medium body, very drinkable delicious brew.
Overall: I think you get it by now... I love this stuff. I will say again, I had a batch in the fridge, purchased directly from Beachwood that I had one of. I went on vacation, got home, busy with work, got sick. So they sat for almost a month and the taste had changed quite a bit!!!! It wasn't BAD by any means, but if that had been my only sample, I probably wouldn't have gone back for a second 4 pack. Just sayin. It might be worth trying again some of you guys that got a can from a friend that had been who knows where for who knows how long.

1 pint can, poured into some fancy beer glass at this bar I am in’s
Look: golden yellow. gentle pour gives about 1.5 inches of fluffy head that sticks around for ages.
Smell: stone fruit, citrus, passion fruit, a little pine. Strong upfront and quite nice.
Taste: hop forward, orange and citrus straight up, pine in there and I’m getting a bit of tropical fruit as well. A touch of malt in there to balance it out.
Feel: decent body, not light bodied but feels refreshing. A nice rounding bitterness and a good length.
Overall: delicious. Loved it.

Pours a beautiful golden amber, crystal clear with lots of active carbonation and a solid, active, off white head.
Nose is big and piney and citrus-y. Bright, clean aromas, with a little bit of yeastiness.
Taste goes big on the citrus bitter bite with grapefruit and lemon zest playing over bitter lime flesh and navel orange. Very nice, crisp clean, classic west coast flavors. This definitely compares favorably to Blind Pig and even Pliny the Elder.
Mouthfeel is perfect, full flavored and strong malt backbone that supports a big crisp hop finish.
Overall this is an excellent WC IPA. Top tier without a doubt, and at 13 bucks for a 4 pack it's a truly unbeatable value. Get this beer, drink this beer, feel good about yourself

Been about 11 months and 33 beer reviews since I last had this. Was saving a pint can for reviewing, but life called upon me to share it, so I did. Lo and behold, despite having moved from Cali out to the great state of Colorado, I actually found a four pack of it again at a very large liquor store in downtown Denver, and only about three weeks old.

L: Pouring about 12 oz of it into a pint glass produces a sudsy two-finger head of eggshell white bubbles. Its body is a perfectly transparent copper-tinted golden amber.

T: The dank is strong on the palate, but it gets accented by the plum, mango, and citrus notes mid sip, and softened by some toasted biscuit notes from the malt, keeping it smooth. The finish comes as an elegantly long but sharp spike of white pepper with underlying hints of papaya, jasmine and lingering pine. I'd say it might be just a tad heavy on the dankness, so it doesn't get a five.

F: Sticky with hop oil, but remarkably dry and peppery with a clean finish. Again, exemplary, but I think it could use a touch more body to reduce the oiliness of the feel.

O: Easily one of the best IPAs in America. Beats everything on that "Other Beer Style Examples" list hands down, except maybe Racer 5. It's actually very similar to old Union Jack, from before FW economized it for mass-production about 3 years ago. Cheers!

Amalgamator from Beachwood BBQ & Brewing
Beer rating: 96 out of 100 with 457 ratings