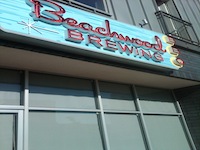 Arrived early Friday afternoon to a not too busy brewpub. Excellent draft selection with all styles represented. Downed a couple flights that included both West Coast & NEIPA, Imperial Stout & Porter as well as a couple of their blendery Belgians. All were well crafted & tasty and the food quite good (Memphis style ribs...yummy)

I really like the setup of this place! Very trendy in a nice part of Downtown Long Beach. Outside areas to sit...nice, comfortable bar to chill at. Customer service was great and felt welcomed and taken care of. Excellent choices of beer and the food was pretty good! This will be a go to spot for me when traveling!

fantastic spot in my own neighborhood! great service, great house offerings and wonderful guest taps too. their swag is on point.

Been here several times. Their beer selection is abundant, most of which is brewed on premise and very good. Lots of very well done IPA’s and many other excellent choices and styles. The food here is just as good. Many choices with several possibilities. If you like an aggressive IPA and some good grub, make a stop here. I will be back.

Beachwood in Long Beach brews some really nice stuff. I've had their beers over the years, but I finally had the opportunity to visit their Long Beach location. It was crowded! I didn't know going in, but it was their 6th anniversary event. I'm glad they are doing well.

Next time I'd like to try their food that I've heard nice things about. The beer selection was excellent today. Will be back when in the area.

Has a bit more industrial feel when compared to the original location, but on the other hand can support a lot of fans as well as tap takeover events with somewhat relative ease.

On the patio there are fire pits and benches for easy people watching on the promenade.

This is for there place in Huntington beach. Great taproom. Standard building with a nice seating area with usb and power plugs right there. Also some games. The beer selection the day I was there was killer. Lots of variety. Got a sampler flight of ipa's. They were all great. Definitely stop here.

Nifty place near downtown Long Beach in a modern space yet with fantastic retro branding. The beer selection is astounding with around 24 drafts and a great representation of styles, but holy cow West coast IPAs Batman! Amalgamator in particular was downright gnarly - I could drink that beer like water.

We have never had a more talkative, thorough and knowledgable server at any brewery. He knew which hops were in what ales, he recommended what to drink with what food, what on tap was freshest, the best selling beers, et cetera. Just nuts.

They also make most of their food from scratch, including a ridiculous selection of legit BBQ. Honestly we were both very underwhelmed with the food here, which also isn't the cheapest. I had the ribs and the wife had their sweet potato burger, and neither of us were very impressed.

Beachwood is a must visit for avid beer fans who also like BBQ. It's in the neat section of Long Beach and has a 60's like feel. The place was Hopping on a Tuesday night. The beer and food were quite good. Troy our server was cool and helped to pick a few beers off the length menu. There is plenty to chose from. The food was excellent....had the three meat....pork, ribs and brisket....pork was the best...followed by brisket....for sides I had the blue cheese grits and vanilla yams....both very good.

Great spot for a good selection of beer at a good price, and great BBQ food. Cant go wrong

Great food, vibe is awesome, beers are amazing. They are making some of the best ipa period.

Came here for a Societe tap take over. While the Societe beers were good, the Beachwood beers stole the show. They brew a lot of different beers and have a lot on tap. Tried 6 - 8 and didn't have one I didn't enjoy. The food was pretty good but honestly that's not why I was there. As far as the vibe goes it's nothing special. Was pretty packed with a typical restaurant like feel. Will definitely go back though.