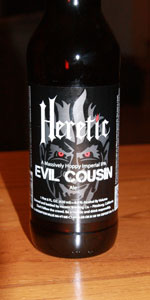 Notes: Almost everybody has their favorite cousin. Ours is a resiny citrus and pine joy with an easy drinking malt character. We love hanging out with our cousin at the beach, camping, hiking and every holiday party. Why not welcome our cousin to your next family gathering?
View: Beers | Place Reviews
Reviews: 126 | Ratings: 535 | Log in to view all ratings and sort
Reviews by gonuts31:

Got this in as an extra from a trade with alwaysanswerb, thanks!

S- Holy hops!!! Has that "dank" hop smell like it says on the bottle.

T- Like it smells, I wish all IPAs had a hint of that "dank"ness. Tastes like I dipped a hop in the beer and took a bite. Man that's great.

M- Smooth, not too thick. Goes down easy.

O- Wouldn't be able drink this all night, but when I pop a bottle that says this is for hop heads and it delivers I get excited. Hope to come across this one sometime again, real soon!

The preponderance of beer in CANs is/has been spiraling out of CANtrol! I am leading The CANQuest (tm) & I CAN't keep up! I am ecstatic that they have begun CANning this one & Evil Twin & I was happy to pick up one of each recently at The Fridge.

From the CAN: "Drink with me Cousin, as Hades comes with the dawn. - Acacius"; "Always brewed and packaged only by Heretic Brewing Co. - Fairfield, CA"; "Almost everybody has their favorite cousin. Ours is a resiny citrus and pine joy with an easy drinking malt character. We love hanging out with our cousin at the beach, camping, hiking and every holiday party. Why not welcome our cousin to your next family gathering?"; "Don't follow the crowd. Be a Heretic and drink responsibly."

More broken record action. One of my first Cousins is Colby Chandler of Ballast Point, my late Pops' late-brother's son. It was at a family gathering in early-Spring 2002 that I got to taste Sculpin in beta. Now, the question is: Am I his Evil Cousin, vice versa, or are we both Evil Cousins?

The Crack! was evil in its intensity, so I was gentle in my Glug so as to keep things on an Even Keel (sorry, different beer, different brewery. I wonder what made me think of that ...). It's a Cousin thing, yinz wouldn't understand. Once decanted, an in-glass swirl raised a finger of foamy, fizzy, tawny head with moderate retention. Color was a gorgeous Yellow-Gold (SRM = 4 - 5) with NE-quality clarity, prompting the Gelt Gang of Midas, Croesus & Mammon to come in from the living room, where they were watching playov hockey on tellly, for a taste. Nose smelled like I was chopping down a pine tree for my living room, or better yet, since it is spring, running the spent trees through a chopper for mulch. Whee! Mouthfeel was medium-to-full, big for the style. The taste was initially cool and minty, like a Calm Before the Storm. Suddenly, the the grapefruit citrus & fusel alcohol began to assert themselves & my poor, bruised tongue cringed in abject terror. This was an Evil beer and I felt ready to Abandon Ship. Fortunately, it passed and I found myself back on an Even Keel. Finish was dry, but minty, and I actually felt fresher for having sucked it down than I did before I started. Summer cooler, here it comes!

from a 22 oz. bottle
pours out straw with a white head
head is rather nicely creamy
I get notes of pine, some sweetness like pineapple
hops on first sips,has a clean bitterness like magnum hops
assertive medium mouthfeel, bitterness settles
nicely on the tongue, seems chewy

Smell is pungent and "dank"(as the bottle says), but smells malty, and boozy.

Taste is very hoppy however. Starts earthy, moves to citrus and floral with a mellow bitter finish.

The body leans towards medium, with some viscosity. Still remains pretty drinkable, and though the booze is present in the texture, it's not detracting.

Enjoyable, and complex hop flavors. The wife and I like this one pretty good.