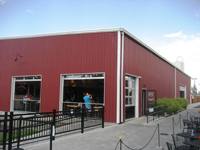 An odd but kind of cool place. An industrial building behind a bank, they had some food and beers set up on a grass area, but we opted to go inside. They had a small bar, some benches, a few bar tables and stools. They have large garage door like walls that open. They also had the cycle pub parked outside, that looks fun, pedal around town while sipping a beer, awesome!

Quality was good, I had tried a bottle of their Pale the night before, and it was dissapointing (bad/old bottle I think). But the double IPA I had on tap here was quite good.

Selection was about 15 beers, only 5 of them were theirs, but the rest were other craft beers from Oregon, a Belgian, and Guinness.

Food was filling, with large portions, standard pub grub, a bit of a limited menu though.

Prices were standard for food, but the beer was a really good value, my snifter of DIPA was only $4.

Overall, I enjoyed my visit to GoodLife, I'd definitely come back. And maybe next time I'll take a ride on the cycle pub!