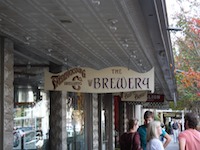 Visited with Da Boss after spending a good chunk of time at the LBJ ranch.

Overall vibe was actually very good. Long bar with fermenters on display for all to see. Left hand side was the old brick façade which lent a nice old tyme warehouse feel. In the back was a decent size bier garten. Ample seating/tables in the main dining room.

Unfortunately the quality of the beer does not match the vibe. The Porter was OK and i was not seeing high ratings for other brews.

Service was so-so as well as our server was pretty slow on a not so busy post lunch Thursday.

Selection offered on the menu was only 5 brews. I did not see any other listings.

Food was very good too. The Rueben was excellent and the German Potato Salad authentic. Da Boss enjoyed her burger.

Overall a neat place to hang out and have a meal and a cold one.

First place we went to when we arrived at Fredricksburg. They were pretty crowded and the bar was full so I grabbed a beer and a wine for the wife and we headed back to the Biergarten. We had been on the road for several hours and it was raining, and that was just what the doctor ordered. A huge cavernous room that was warm and it was all to ourselves. I only had the IPA and I have had worse, pretty good beer, would get another one. Didn't try the food (but from what I saw it looked pretty good), but will be going back to Fredricksburg and will try it next time. Being a wine town, there are actually a couple of places that have pretty good beer selections, this is probably one of them.

I'm not really sure how I ended up in Fredericksburg (it had something to do with antiques), but it was a pleasant visit, and one of the highlights was the Fredericksburg Brewing Company. I had no idea that they had 12-guestrooms upstairs, but had I, I just might have looked into booking one.

I don't mean to be offensive when I say that it doesn't look like much from the street, because that's actually a huge part of the historic charm of the street, but it also doesn't look like much on the inside, which is still OK. It looks like a simple family style restaurant with a brew house tucked in on one side, which is charming, at least for me coming from the big city.

There are generally 6 beers on tap including their signature Peace Pipe Pale Ale, Harper Valley IPA, Enchanted Red Rock Ale, Helles Keller (I'm still not sure if that's funny of not), Pioneer Porter, and Not So Dumb Blonde. If you're lucky you might catch an interesting additional beer.

Not unlike other places on the strip, it's got a Biergarten out back where you can hang out. Personally I prefer the bar in the air condition, but I see how that can be a little stiff while it's more of a "hang" outside.

Overall it's got a basic, solid feel to it. Good beer, good food, nothing fancy.

Six of its own beers on tap. Personable, knowledgeable staff. Cool vibe. Growlers to go. Place was packed with people eating on a Tuesday night.

You can only drink Fredericksburg Brewing Co. beer here at the restaurant, and it is certainly worth the trip. The atmosphere is incredible and the beer even better. Food ranges from traditional pub fare to German cuisine, and it is all amazing. I highly recommend this place anytime Fredericksburg is close!