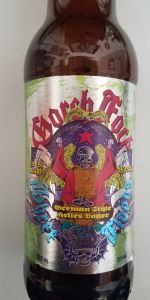 Notes: A light golden colored Franconian style Helles Lager. With a slightly sweet malt body, a noble hop profile and a crisp finish this beer is as traditional as we’ll ever get.
View: Beers | Place Reviews
Reviews: 201 | Ratings: 664 | Log in to view all ratings and sort
Reviews by JohneHoodlum:

Close to two fingers high head of dense white foam that craters in spots as it starts to dissipate, the lacing forms broad solid sheets before steadily sliding down into the glass. Somewhat clear in spite of the gauziness to the liquid, loosely aggregated medium sized bubbles steadily regenerate, quite pretty overall. Nose of corn syrup, honey, caramel and flowers, challah bread and a light peppery quality, the apple, peach fruit scents are faint and for the most part not especially missed. Medium-bodied, light on the palate with a gentle fluffiness. More of that corn, dough and sweet grains with soft orange like citrus tones, flowers and chamomile. Minimal grassiness without much bitterness. Malty finish with slightly more apricot, peach, apple fruit than found in the nose. Smooth while maintaining presence.

Mildly milky maize beneath a bright white, cumulus cloud crown. The cap is a mere two fingers in thickness (small given my typical pour) and doesn't have a world-class look about it. It's a little mealy and doesn't generate much lace. Only the color and the bottle-conditioned blurriness of the beer keep things respectable.

Yep, this is a Munich helles lager all right. The nose is reminiscent of most beer of this style. The fresh grain-like quality of the pale malt is balanced by a grassy German hoppiness that isn't nearly as powerful now as when the cap was first breached. I wasn't sure what to expect, but it's obvious that this isn't typical Three Floyds beer.

I'm somewhat surprised that the boys from Munster have been so faithful to what is anything but a gonzo style. To their credit (I guess), they've decided against pushing the envelope by breaking out their signature, gotta love it, 'balls to the wall' hoppiness. Forget what Gorch Fock isn't. What it is... is solid, well-constructed, enjoyable beer.

The key to the whole shootin' match is a generous amount of ingredients that are superbly balanced on a razor's edge. Any more pale malt and the beer would be too sweet and too flavor-deficient. Any more hops... well, I could stand a little more of the lemony, grassy, lightly spicy noble hoppiness that is teasing my taste buds with each mouthful. The finish lingers pleasantly rather than being clean.

The mouthfeel, while not immediately impressive, holds up well to intense scrutiny. Given the style and the ABV, it's medium at least and medium-full at most. In addition, the brewers have dialed in the precise amount of carbonation for maximum enjoyment and maximum quaffability.

Gorch Fock is one of the best Munich helles lagers that I've ever had. It proves the point (that didn't need proving) that Three Floyds is anything but a 'dump in a massive amount of hops and see what happens' kind of brewery. These guys are craftsmen, dammit. Forgetting the German origins of this beer for a moment, they're also one of the best brewers of 'American style' beer on the planet. Maybe *the* best.

Expectations are below average given that it's a traditional German style and 3 Floyds brewed it. Served cold into a tulip. Reviewed live as a helles lager.

APPEARANCE: No bubble show forms as it's poured.

Head: 2.5cm wide white colour head. Below average frothiness compared to traditional examples of the style. Middling thickness. Leaves no lacing as it recedes. Retention is poor - maybe 1 minute at most.

Body: Murky orange with gold and copper hues. Translucent but nontransparent. Not as clean and filtered as the style demands, but at least there's no visible yeast or sediment.

Appears undercarbonated. Overall, it's a lackluster appearance for the style.

Aromatic intensity is average. Suggests a helles lager with too much body, sweetness, and hop content. In short, it seems like any other American attempt at a traditional helles lager.

TASTE: Honey malts and Munich/caraMunich malts lend this a fair amount of sweetness, eclipsing the hop profile - which isn't as badly executed as I feared, but still brings too much to the table with its floral and grassy character. Not subtly hopped at all, save for a hint of spicy hop character. Has a clean German yeast profile, but the attenuation is off for some reason...too high, methinks - lending this an element of raw wort-like malt character.

Average depth, duration, and intensity of flavour. Balance is off, but it's decently built for what it is. As an approximation of a traditional helles lager, it's not bad. Lacks the subtlety, nuance, and care in its execution seen in traditional style paragons.

This mouthfeel doesn't elevate the beer as a whole or help bring out the best in the flavour profile by accentuating specific notes, but presence on the palate could be worse (e.g. if it were oily, gushed, hot, or boozy).

OVERALL: Traditional German lagers aren't exactly in 3 Floyds' wheelhouse, but it's nice to see them try. I wish I had company to help me finish this inexplicably large bottle, which is kind of the opposite of what you're going for when you brew a helles lager. This should be so drinkable and light I'd be ready to kill a 6 pack, but instead it's just a mediocre brew with clumsy overhopping and a seeming lack of care for tradition. I wouldn't trifle with it again, but some 3 Floyds devotees will probably defend it. There's nothing here for the discerning drinker.

Tastes of over sparging and shitty water. Instant drain pour.

Flower aromas and flavor meet grain in this bold rendition of a Munich Helles.

The beer begins with a heightened floral aroma of unmistakable German Saaz hops. A plethera of flowery aromas surround an aromatic structure of grain and honey.

Medium yellow/straw in color, the beer carries a medium haze and golden highlights. A medium sized head forms on the beer and slowly fades before vanishing midway through the session. No real lacing develops on the glass. All slightly off from great Helles.

Soft malt/honey flavors override grain flavors and are backed by the flowery, honeysuckle taste that rounds the beer out very well. Just enough bitterness in the finish to balance the beer. Light sulfurs and a minerally quality aids the hops in balance and complexity by giving a mild acidity to the beer.

Heavy textured for a light German lager but fine for a Bohemian lager because of the increased grain bill. As a result, the alcohols creap up and beyond the minty evaporative types and into the warming feel.

A tasty lightish lager that shines in it's hop fragrance but turns into a sweeter grainy taste otherwise. Breadiness returns in the aftertaste.

Shockingly pale with an active but soda water-ish, fizzy head.

Typically German malt flavor (somewhere between a Munich Helles and a Kolsch) bolstered by the ever-present 3F's hyper-hopping.

Slightly lacking in vitality although the thickness seems about right. The taste is excellent however and my recent fling with German beer leaves me finding this a very welcome interpretation of the style. Think Gumballhead goes to Bavaria.

Served in a pint glass. Had a clear pale golden color with a medium sized white head. Smells slightly of a German Yeast Strain and sulfur. Taste was very sweet, bread-like character with a hint of fresh grain in the finish. Bitterness levels match up to balance the beer. Decent mouthfeel, carbonation levels are nice and low. Quite drinkable, low alcohol content makes this a good session beer. One of the best Helles style lagers I've had.

A- Pale straw yellow with good carbination and white head. No lacing
S- Many levels of maltyness
T- Classic pale German Lager taste. Layers of malt... sweet.. little bitter
M- Bit more on the wet than dry side for a lager. Good carbination.

O- Good for the german lager style. Not my go-to style, so I may be under-rating this beer.

22 oz bottle into a pint glass.

Pours a clear gold, with 2 foamy fingers of eggshell-white head. Retains with a thin filmy look, that leaves a very light smattering of lace behind. The aroma is mostly sweet, with some definite buttery biscuit action going on with it. Some floral hops and green smelling citrus character, adds a bit of a hoppy tang to the nose.

The taste is fairly well balanced, with that same malty mix of bread and light caramel (there's even a touch of butter thrown in for good measure) being evened by a sharp tingle of spicy bitterness that runs right up the middle of this. That same green citric feel from the aroma adds some tang to the sweetness. Hops carry into the finish, with more spicy dryness that hangs in there along with a splash of leftover malt. The mouthfeel is medium bodied, with a crisp, yet smooth, feel the carbonation that gives this a nice firm presence in the mouth.

Well done version of a Helles, with a crisp yet easy feel and enough spicy hops to help balance a lot of that big sweetness. Nothing really abnormal here (per the usual M.O. of FFF), just a flavorful and nice drinking Lager.

Poured from 22oz brown bomber into a clear pilsner glass. No freshness date.

A: Hazy amber-gold with 2-finger oatmeal colored head with average retention and a few spots of lace.

T: A big-flavored Helles with substantial pale maltiness with a good combination of smooth sweetness and husky grain flavors. The hops contribution is bold without overdoing it -- a solid grassy, spicy, noble hops punch to complement the toasted savory Munich maltiness.

M: Medium- to medium-full body with even carbonation and a husky, malty aftertaste with a sharp, spicy hops snap.

D: A really, really good Helles lager that gives Weihenstephaner Original a run for its money. An unsung member of the FFF family.