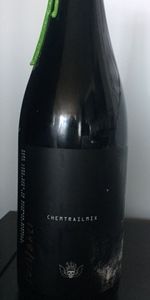 This one pours a very dark black color, with a small filmy head, and not much lacing.

This is absolutely one of the best uses of cinnamon that I've ever had in a beer. There's a nice oaky bite to this, and along with the cinnamon and the slight peppery bite, it all makes for being able to balance the heavy sweetness of Dark Lord well. There's lots of dark fruit and vanilla here, with a touch of coffee and lots of creamy milk chocolate. This has the impression of liquid Cinnamon Toast Crunch, or even more accurately - chocolate covered churros. I haven't had the rye barrel version of this to compare with the bourbon barrel - but i can't imagine a better version of this unique take on a pastry stout.

This is thick, creamy, and sweet, but not too sweet, due to the barrel and cinnamon. It's not all that boozy.

This is easily one the most unique and well done barrel aged stouts that I've ever had. I've only had a small handful of BADLs, but this is certainly near the top for me.

I’m finally ticking this beer, and I’m really digging it. It’s distinctly cinnamon-forward, but I’m surprised by the influence from the peppercorns. It’s an added layer of complexity, and really gives a balance that I never knew the cinnamon needed.

Pours black with a finger of khaki foam. Big oily legs form the glass after a swirl. Aroma is cinnamon - which is big, pointed, and sharp. Cinnamon is followed by pepper for a more pointed nose. Roasty and toasty malts follow alongside bold barrel and bourbon. Flavor profile is, again, heavy cinnamon - with a thick, full, and spicy consistency. It's followed by peppercorn notes, adding to the spicy zest. Chocolate and fudge notes help round it out a little, but do little to quell the initial spice. Roasty and toasty malts and bourbon sit underneath, forming an expansive base. Mouth feel is thick with a lightly velvety texture. Overall, really spicy with a pungent nose. It's boisterous, chatting from start to finish.

Served from a 750mL bottle. Light blue wax. 2021. Bottle allowed to warm ~45 minutes outside of fridge for proper serving temperature.

Side note: I've heard For Phil referred to as "the cinnamon challenge", but it pales in comparison to this beast.

I thought this might be over hyped, had it at a friend's place, favorite beer this far. Insanely adjuncted folks.

Bottle: Poured a pitch-black color stout with a nice large dark brown foamy head. Aroma of cinnamon is quite overpowering with some molasses and black chocolate notes also perceptible. Taste is a mix of strong cinnamon notes with some very faint peppercorn notes, huge amount of residual sugar with some molasses and black chocolate notes with some discernible bourbon notes. Body is full with syrupy notes and good carbonation with very little alcohol showing. Interesting but cinnamon is overpowering which limits drinkability.

Tried this at dark lord day. This was the best stout I have ever tried in my life! The pink peppercorns, cinnamon, and rye barrel aged accent each other in such a way.... In all seriousness I have dreams about this beer I was lucky enough to get a 2018 in my allotment and it takes all my will power not to crack and chug it every day. If more people try this I’m 100% certain you will like it way better than Handjee. This blows handjee out of the water and I think it’s the #2 overall rated beer? That’s why i have this rated as a perfect 5 if it blows Handjee out of the water it’s a perfect beer in my opinion.

Tasted from bottle. Pours black with minimal beige head. Lots of spices on aroma. Vanilla, cinnamon, bourbon. Taste is moderate to heavily sweet but not as much as regular dark lord. Nice cinnamon flavor and thankfully not a cinnamon bomb. Flavors of vanilla, cocoa, coffee, caramel, molasses and a hint of peppercorn on the finish. Awesome beer.