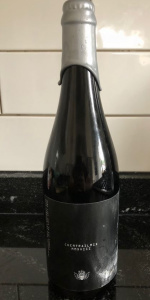 This beer is world class; the rye barrel alone brings dark lord to another level and then adding the layers of cinnamon. Following that with that pink peppercorn that makes this beer come alive. Theres nothing one can say about this to improve; it’s wonderful.

This is my #1 beer. The absolute best beer I've tasted. It really turned me onto Cinnamon in my stouts. The Pink Peppercorns and cinnamon are just great together.

3F Hanjee gets all the hype, but Chemtrailmix is right up there, if not better depending on the year. I've had 2018 and 2019 and they're both solid beers!

Ok, formalities: Thiiick & full-bodied. Blow-your-head-off nose, with all the Xmas you can possibly picture in your mind, in this bottle. Cinnamon, those pink peppercorns, choc... just mind blowingly great

WOWZA! This was the 2018 edition. Such a big boy beer. Poured like thick black motor oil. Nose was subtle, but indicative of the lusciousness to come. Will definitely have to seek out other vintages. A top tier stout for me.

2019 vintage. Released about nine months ago.

O: What a mess. The cinnamon addition and barrel don’t save a base beer that is utterly hopeless. The cinnamon is dialed up too much and dominates the aroma and flavor. The barrel character is nearly non-existent. The sweetness is overwhelming.

This tasted like cinnamon toast crunch with a bit of bourbon barrel & some chocolate. That said...it was an upper echelon "pastry stout". I'd have another...

2017 bottle stored in cellar since purchase. Poured into a 3F teku.

Pours an inky black body with a big brown head that sticks around for a while, leaving rings of lacing.

Aromas are heavenly - cinnamon-bourbon vanilla, dark chocolate. The mouth matches the nose with a perfectly balanced medly of cinnamon and bourbon, vanilla, horchata, a little bit of spice on the finish, leaving a slightly roasty flavor on the palette. Rich mouthfeel.

One of the best stouts I've ever tasted. I just opened a bottle of 2019 Barrel Aged Abraxas and this blows it out of the water (although I've heard 2019 BAA is not a great batch)

Had this both fresh and "aged" for what it is worth, and I will say that the strength of the cinnamon itself does die down a little given time. But even with time, this is a cinnabomb, and as my favorite adjunct in a stout, take the rating with a little sense of bias. The cinnamon hides/tones down a bit of the sweetness of the overall brew, yet seems to be enhanced in flavor. A great addition to the BA DL family.

I've had the pleasure of enjoying Chemtrailmix three years in a row now - the bourbon barrel variant in 2017 stands out to me the most as it doesn't have the same bite and spice of rye (which I also happen to love). With a bit of age, the peppercorns mellow just slightly and the bourbon smoothly shines through. Back to back with barrel-aged Abraxas, this is still a tough one to beat. The cinnamon is far less present though, and those peppercorns have more of a bite.

Even more so in the rye variants.

Chemtrailmix is worth every bit of the praise and hype that it receives. It's a bit of an adjunct overload when fresh and hot, but it's a stunner with a little age. My love for this beer cannot be overstated.

Tasted from bottle. Pours black with minimal beige head. Lots of spices on aroma. Vanilla, cinnamon, bourbon. Taste is moderate to heavily sweet but not as much as regular dark lord. Nice cinnamon flavor and thankfully not a cinnamon bomb. Flavors of vanilla, cocoa, coffee, caramel, molasses and a hint of peppercorn on the finish. Awesome beer.

by far the best beer with cinnamon I've ever had. Very thick, this was Batch 1 that I had. It was really well balanced, cinnamon wasn't overpowering.

Had on tap at DLD. At a glance this looks like most other DL with a dark chocolate brown with a small head. The smell is dark chocolate and cinnamon toast crunch. When you take a sip the, the cinnamon plays perfectly with the dark chocolate and cocoa aspects of the Dark Lord. There is a slight heat and spice on the backend that lingers. Overall, this is one of the best variants of Dark Lord I've had in awhile and get why people hope to get this bottle!

Appearance - The beer poured dark color with a creamy mocha head topping off the pour.

Smell - Spicy cinnamon was very forward in the nose. Despite the high ABV, booze was not evident in the nose. Some roasty chocolate notes were also present.

Taste - As best I can describe it, the beer was liquid cinnamon Christmas trees. The cinnamon was so well balanced with the spice. It seems some brewers add cinnamon to extreme limits, and consequently destroying the beer. This was so well balanced. The peppercorn added a unique dimension that allowed for a pleasant burn at the end.

Mouthfeel - The beer was silky smooth with light carbonation and a slick sweetness. The spice was allowed to linger.

Overall - This is a great beer. Seek it.

L: Dark mocha and chestnut hues with a rust-colored head and ample lacing
S: Fresh cinnamon rolls and a trace of light roast coffee
T: Mouthful of cinnamon toast crunch cereal up front that allows a slight spice and caramelized sugar to shine through
F: Medium bodied bordering on thick
O: One of the better BA treatments of Dark Lord that makes its own statement. The rye barrel aging paired well with the hint of peppercorn spice and was smoothed out by a mellow, but distinct cinnamon note.

One of the best beers of the year. This balances out perfectly the cinnamon and peppercorns with the barrel and the stout. A really really special beer that I’m very glad to have tried and have more of

This glass of used motor oil on draft has brown staining legs in spades and a lesser mocha fizz than its un-spiced, un-aged younger brothers.

A shit ton of spicy cinnamon melds with wet brown sugar while raisin, black pepper and woody rye boldly accent. That peppercorn actually comes out more this time, contrasting all the powdery cinnamon, smoky charred oak, and sweet dark chocolate covered raspberry that this mother isn't shy to throw at you.

A bit of a sting runs through the smoothly slick, thickly round body that swallows semi-dry and heats the tummy.

Is this even better than last year's sleeper hit? I think so. The more pronounced character of peppercorn really enhances the rye presence and adds infinite complexity and depth to a beer that sounds like it might be over the top. This is a hell of an experience.

At DLD 2019 I had the new version which is the same treatment as the stellar 2018 version, but found it to have a shockingly big explosion of not entirely spicy but dusty cinnamon. On the exhale I still got the total Cinnamon Toast Crunch and brown sugar deliciousness of the past year, but the front end is a little more potent and spicy than past years. It's still one of the better variants, amongst a collection of great brews, but not my favorite this year.

Pours thick black with a halo of brown bubbles. Nose is dark chocolate, cinnamon and spice. Taste is very sweet at first, and then balanced out by the spice and of the rye barrel working very well with the cinnamon and pepper. Feel is smooth with a very nice mouthcoat that keeps the flavors lingering. Great beer. The rye barrel with the spices really worked well for this.

Draft at DLD and on draft 2 days later at FFF.

Dark dark dark appearance. No foamhead except for caramel colored ring on the edge of glass. Cinnamon, bourbon, some chocolate and even a slight bit of jamminess. Taste follows the nose. Good bit of cinnamon but not overpowering other ingredients. Chocolate is present and some jam quality too. GOOD bourbon note and a very sticky thick mouthfeel.

As someone who’s had the past four Marshmallow Handjees and many other DL variants, this just may be the best one: Chemtrailmix 2018. Also, this dwarfs BA Abraxas 17 I had and makes the BA Abraxas taste one dimensional and lacking in barrel presence. Top 5 beers I’ve had all time... easily.

I had FIVE of the variants on DLD and this was by far the best. The taste is a mild cinnamon toast crunch with a great balance of the peppercorns. This is a world class stout, very silky. If you can get it, get it.

This beer was amazing. I sampled 6 of the Dark Lord variants including Marshmallow Handjee and French Vanilla Malitia. It was the best by far. Personally it stole the show at Dark Lord Day. It was even better than the 2017 version.

First beer I had at Dark Lord Day 2018. Sampled multiple times throughout the course of the day as well. On draft and poured into plastic cups, which were then poured into my glass. Standard Dark Lord body, not much to be said about that. Smell is a massive cinnamon, slight spicy rye, brown sugar, a bit of burnt black coffee, a bit of umami, milk chocolate- recognizably Dark Lord underneath. The flavour is a bit more muddled, but the cinnamon remains huge, from the beginning to the end, contributing that cinnamon toasted crunch up front intermingling with the DL base, and combining well with the spicy rye barrel to bring more of a spice component on the backend. Peppercorns aren't as prominent as in 2017, which is a good thing. Mouthfeel is full bodied, good carbonation, smooth and slightly silky, cinnamon spice on the finish. This is on the level of BA Abraxas in terms of the cinnamon, without the green pepper from the spices. I can see this one being the variant of the year.