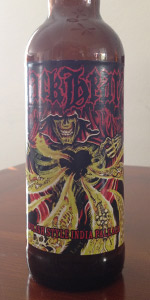 Notes: A throwback historical ale brewed when English IPA's were hopped up to last the long voyage from England to Colonial troops in India, using English malts, English hops, English yeast and aged slightly on toasted oak for a 19th century taste.

Reviewed by BSChief from Maryland

4/5  rDev -0.7%
look: 4 | smell: 4 | taste: 4 | feel: 4 | overall: 4
Copper colored with a half inch of creamy and dense tan head. The aroma is of a hint of smoke and earthy hops. The flavor presents bold earthy hops, smoke, and finishes with a touch of vegetation and coppery and slightly dark malt. The mouth is dry, lightly resinous and sticky.
Oct 07, 2017

Rated by Luscious_Malfoy from Illinois

Reviewed by BierRunner from Ohio

Reviewed by ChilliHeights from Ohio

Rated by Stutz from Indiana

Pours a hazy amber with a big head that fades fairly slowly. Moderate amount of fine carbonation. Smell is grassy, slightly funky, moderate amount of spice, some biscuity maltiness. Some hints of citrus.

Mouthfeel is dry but full. Overall, a very good beer.

Pours a dark caramel-orange body, slight amber hue, two finger white head, good retention, lots of lacing. A nice looking beer, a bit darker than expected. Smells of rich toffee, floral notes, marmalade, a big bite of citrus. Essentially what I was expecting from a Three Floyds' take on the English IPA style. It does have a heavy American influence with the citrus and grapefruit. Flavour is similar, with a solid caramel and toffee backbone, lots of orange marmalade, lemon and citrus. Lingering citrus and marmalade bitterness. A very nice beer. Mouthfeel is medium bodied, appropriately carbonated, nice substantial feel, mild-moderate bitterness that lingers for a while. Good stuff. Overall, it took a while until I found the first bottle that wasn't already a month old, but I'm glad to have finally had this one. A nice, Floyds-centric American take on the English style IPA.