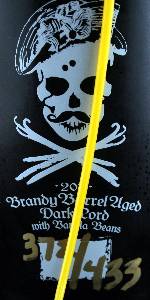 Notes: (AKA Marshmallow Handji)
This is our massive Russian-style Imperial Stout aged for one year in brandy barrel with Madagascar vanilla beans. Thick, smooth, complex, and warming, this rare beer will certainly be remembered.

2011 - Not much carbonation left at all. Stains the glass a little. Brandy and sweet smell. Pours pitch black with just a pitch of red at the bottom. Brandy and malt

This is as good or better than I remember when having it fresh with my oldest son after waiting hours in line to get in to the pub during the 2012 festival. Shared it with him tonight (8/10/2019). It held up just fine for 7 years. It gave a small hiss upon opening the cap and smelled wonderful. Strong coffee and vanilla. Tasted creamy and smooth. It was a wonderful memory shared.

wow, Hugh surprise from my buddies.

Pours dark with little to no head, right away your nose is hit with a caramel, sweet vanilla aroma. The brandy adds such a delicate balance to this beer. Mouthfeel is typical darklord thick, coats your mouth allowing the flavors to linger. The taste is phenomenal! The brandy is has sweeter tones but not at all over the top sweet like bvdl usually is. I thought for sure the vanilla would have faded being an adjunct that falls fast. Not true at all. Vanilla is excellent, and goes so well with the brandy. All in All one of the best stouts ever to touch my lips. Enjoyed this very much.

Probably the best stout I've ever had! No more to say

The amount of vanilla is huge in this. Comes without a big degree of sugars too that typically come with some of the vanilla offerings. Hides the booze.

This is a solid desert beer to enjoy with rich chocolate cake.

Side by side with other variants from 2011.
This beer was the first one I had added on my wants list here, so thanks a lot Chris for sharing!
A: Dark pour with almost no head to speak of.
S: Vanilla is the most prominent flavor. Other than that, smell is sweet with candies, strawberries, marshmallow and bubble gum. Tons of marzipan also. Nice but a bit artificial (more than the bourbon vanilla, although this one varies a lot from one year to another...). No off-flavors like soy sauce or candy sugar however.
T: Taste is awesome. The best Dark Lord I have had so far in this regard. Vanilla, marzipan, chocolate, dark fruits, prune, soaked plum and cherries mixed together. Deep and complex, balanced. Surprisingly not sweetness nor alcohol to be found on the palate. No artificial flavors either. I would say the taste is even better than the Pappy van Winkle version. Long lasting. Travels back and forth from vanilla to cherries, from chocolate to dark fruits. Subdued apple and brandy as it warms. Amazing!
M: Awesome mouthfeel. The smoothest version of 2011 barrel aged dark lord.
O: Awesome beer. The smell is not really balanced (like the regular Dark Lord or the Brandy version), but apart from that, it is the best variant I have had.

Big shoutout to Brett for bringing to DLD 2014. Definitely the highlight of the day that included whale after whale. The smell was that of roasted marshmallows and coffee. The vanilla was so prevalent and the Brandy added a very different flavor than you get with the lesser bourbon aged vanilla counterpart. One of the finest barrel aged stouts I've ever had.